Barneys New York is going for the serene and the cacophonous for its latest window display extravaganza. 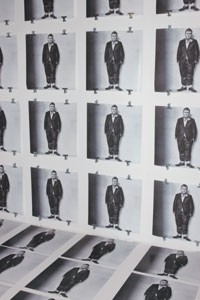 NEW YORK — Barneys New York is going for the serene and the cacophonous for its latest window display extravaganza.

The specialty store is scheduled today to unveil two windows in celebration of 2005 CFDA Fashion Awards honorees Diane von Furstenberg and Alber Elbaz. Von Furstenberg is receiving the Lifetime Achievement Award, while Elbaz, Lanvin’s artistic director, will be given the International Award at a gala next Monday at the New York Public Library on Fifth Avenue here.

“We don’t normally do this, but these happen to be two designers we hold close to our hearts,” said Simon Doonan, creative director of Barneys New York.

Von Furstenberg’s window offers a behind-the-scenes glimpse of the designer, from a montage of visuals, including her famous Newsweek cover, Andy Warhol’s prints of her, family snapshots and bolts of fabrics.

“Basically, I drove a gigantic U-Haul to Diane’s studio, and a whole bunch of us just hurled in memorabilia and detritus from her studio,” Doonan recalled.

The display also features a mannequin styled to look like the designer, with its back to the window.

“We didn’t want to attempt to replicate Diane’s face,” Doonan said. “It made it a bit more Dada to have her standing in the middle of the madness of the fabulousness that she has created.”

In sharp contrast, Elbaz’s window is an abstract art installation featuring a repeated Irving Penn photo of the designer, but no Lanvin clothes.

“I wanted it to be dramatic,” Doonan said. “[Also], we don’t have any clothes. It’s been an unbelievable season with Lanvin. The sell-through was extraordinary, so there wasn’t a huge amount to pick from.”

The installations will be in place for two weeks.

This story first appeared in the May 31, 2005 issue of WWD. Subscribe Today.
load comments
blog comments powered by Disqus