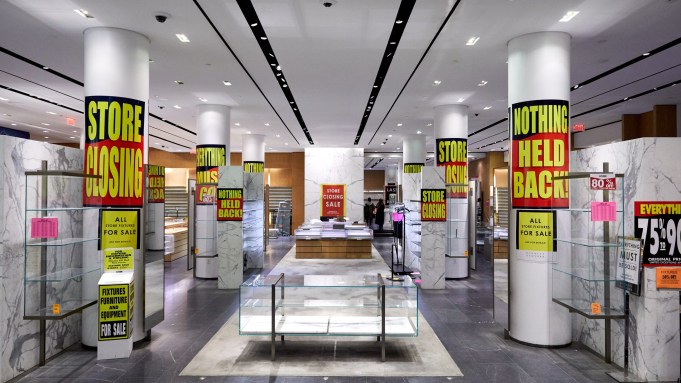 NEW YORK — Standing smack-dab in the middle of Barneys New York’s subterranean beauty floor at its Madison Avenue flagship, the onetime beacon of luxury commerce now resembles a set from the depths of a Space-Age horror film.

Light bounced off the stark white fixtures that once held tubes of luxury lipstick and antiaging potions as fluorescent track lighting flickered along a mirrored wall where perfume bottles had been displayed like prized whiskies. They were gone, as were all of the skin-care testers — save for a few straggler bottles of Augustinus Bader’s much fussed about $300 “miracle” cream, which seemed to have been strategically decanted of their contents.

What was once at the cutting edge of fashion, entertainment and consumption has quickly been rendered as a time capsule from grander, off-line times. Barneys’ famed flagship will close on Sunday, sold through of its last stained velvet chair and scratched steel display case.

“This is Stanley Kubrick-esque for sure,” said a stationery designer, who once sold at Barneys and had returned to document its final days with a series of cell-phone photos. Over the last week, the dissolution of one of New York’s top retail icons became a spectator sport for all walks of life — including WWD’s cab driver home from the store one recent evening, who had gone to comb through the sale.

Fashion publicists, luxury retail store managers and design students made their final pilgrimages to the store, rubbing shoulders at any given hour with Chinese resellers, self-described eBay connoisseurs, Russian tourists and a revolving door of rumpled types seeking out a deal during their lunch breaks from banking offices nearby.

Their collective anticipation recalled the days of Barneys’ famed warehouse sales, but instead of walking into the back stock of its Chelsea store, shoppers were bargain-hunting on Madison Avenue — picking from the remains of an institution where employees with decades of tenure were facing down a quick path to unemployment.

Where the store went wrong has been well documented. It will now fall into the hands of Authentic Brands Group, which will utilize the 275,000-square-foot Madison Avenue space for a series of pop-up shops and activations until the building’s landlord, Ashkenazy Acquisition Corp., finds a new tenant. All of Barneys’ remaining seven stores — a combination of flagship and outlet locations – will have closed by the end of this week.

Gene Pressman, a member of Barneys’ founding family and the store’s co-chief executive officer and creative director from 1972 to 1998, helped grow the retailer from what he described as a “men’s discount store” to an “emporium” of the cool and cutting-edge.

It was a clubhouse for creative minds and wealthy aesthetes in the days when shoppers had to visit a store to see what was in stock. But to Pressman, Barneys’ success lay in how “my family never considered Barneys a department store, maybe in size but not in stature. We were a specialty store with a unique point of view.

“It felt like we were in the theatrical business, creating theater, because in those days fashion was the leader — it influenced music, motion pictures, it influenced art — it was the impetus of everything,” Pressman said.

But his flair for extravagance helped lead the company into its first bankruptcy in 1996, five years after the retailer expanded from its longtime home downtown in Chelsea uptown onto Madison Avenue.

Fashion’s favorite architect Peter Marino designed the Madison Avenue flagship with the idea that, “it would be like Liberty London. I thought it would be there 150 years. I put mosaic tile floors that I thought would last for 100 years. Nothing shocked me more than Barneys filing for bankruptcy [in 1996] and the new owners ripping out those floors. I never put my big toe into the store after that.”

For Marino, the writing was on the wall. “They made it look like every other department store. One of those fund guys purchased their debt and thought, ‘Let’s change the flooring to white marble material, that will certainly increase sales.’”

Fast-forward and the Pressman’s family business has crumbled under years of mismanagement, putting thousands of employees out of jobs and leaving designers both big and small unpaid and in danger of bankruptcy themselves.

Giacomo Piazza, cofounder of the showroom 247, which represents some of the world’s most promising young talents, said Barneys “came to my showroom demanding exclusivity, knowing that they were going to close in six months…it was irrational and they overordered — putting people in serious trouble. The pressure on designers was big because Barneys was a big name and they knew they were going to screw the designers over. I know so many brands that have been almost put out of business from this.”

Over the last month, Barneys’ rig of precious goods was fast depleted by corporate liquidation company Great American Group. Supply ran so low earlier this week that the store began selling Barneys gift boxes and ribbon spools for $2 a piece — memorabilia that drew a 20-minute checkout line. Less enticing were bins of shoe peds, empty sunglass boxes and ripped friendship bracelets. Single Gianvito Rossi and Balenciaga shoes with no mate to be found were on offer at $5 apiece.

In the weeks before, Great American Group had used Barneys as a catchall to sell off the remnants of other failed fashion enterprises. Merchandise from Roberto Cavalli (the American subsidiary of which went bankrupt in April), Zac Posen (ceased operations in November) and Calypso St. Barth (liquidated in 2017) flooded the store’s selling space — offered at more than 90 percent off.

This week, the store was scraped clean, down to its contemporary dregs. A dark irony came in seeing Sixties revival skirts from the Lisa Perry label — created by the wife of Barneys’ final owner Richard Perry — among the final castaways. They hung alongside relics from fad movements that had long been stowed away within Barneys’ inventory — remnants of the early-Aughts designer denim movement, flotsam chiffon gowns for prerecession Upper East Side shoppers who ran in New York’s gala scene and pre-#MeToo-era stilettos.

Garment racks suspended from ceilings — a display concept that originated at Barneys — hung empty, like gymnasium monkey bars. Merchandise may be gone but the names of top designers — many of them still with outstanding invoices — remain etched onto walls. An auxiliary dry wall emblazoned with “Dries van Noten” that had been used to display the designer’s seasonal highlights was on sale for $75.

Last week the store’s coed shoe floor that WWD labeled as a “gleaming…light-filled loft setting,” when it was unveiled in 2012 had more shoes scattered on the floor than shelves. Over the weekend this, too, was fully cleaned out, with only beat-up sofas and chairs left to sell off (starting price $1,000). Fixtures that had been cleverly placed to hide garish carpet stains were moved around, revealing wreckage likely caused by wealthy shoppers’ children and aprés-brunch spills.

Sales associates, some with two decades of Barneys tenure, were left to sell off damaged or random merchandise, which in the final days included expensive fur coats and rugs. They packed purchases into plastic grocery bags, continuously nagged about original prices by hawkers looking for attractive comparisons to post on their eBay listings.

For sales associates, the pomp and circumstance of luxury retail was understandably over. The divide between wealthy shoppers and those who serve them was palpable on the ninth floor, where employees retreated to a staff break room without closing the door behind them. Loud venting and the smell of microwave lunches filled the hallway outside of Fred’s, where a dozen or so patrons were still dining on $30 Cobb salads and $15 shallow bowls of chicken consommé. Many union employees say it is unclear how much court-mandated severance pay they will receive.

Piazza said the shock of seeing Barneys in ruins is “a big wake-up call for everyone, all of the stores are now saying ‘How can we avoid being the next Barneys?’ and adapt for this new global marketplace?’ It’s sad to say, but maybe Barneys was the sacrifice to put everyone back on track to making a healthy business that supports the industry.”

For Pressman, the art of shopping is over. “The energy is weak,” he said of runway collections and the stores that sell them. “There will be other things,” he said. “I think everything has its day. Going to concerts or the theater, event spaces and parks is more exciting now. People are getting out and enjoying experiences of life other than just being in a store.”