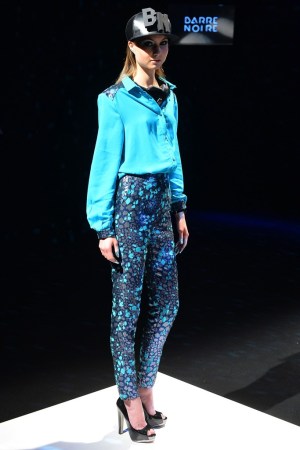 Spinning disco balls, neon light projections and blaring club tunes set the scene for Barre Noire’s unabashedly bright party gear. Most of the models wore DJ headphones just in case the message wasn’t clear enough. Designer Timm Süssbrich gave leopard print a vibrant makeover in boisterous blues, shown on high-waisted cigarette pants paired with a sky-blue silk shirt that carried the same motif on its cuffs and shoulders. The print also appeared in pink and green on a short linen-paneled dress and on the shoulders and lapels of a gray wool coat. As for other prints, a paisley silk suit was the show’s highlight; worn over a canary-yellow camisole, it was well cut and the right side of garish. A floor-length azure chiffon gown balanced out the more tailored items.