The world's leading accessories brands are holding on to their top spots by staying true to their roots.

Many of this year's top 10 accessory names — headed again by Liz Claiborne and rounded out by Louis Vuitton — are returning to... 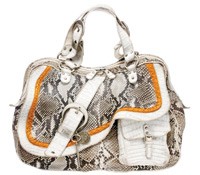 The world’s leading accessories brands are holding on to their top spots by staying true to their roots.

Many of this year’s top 10 accessory names — headed again by Liz Claiborne and rounded out by Louis Vuitton — are returning to their origins, be it with special anniversary collections, as with Gucci, which marks its 85th this year, or nostalgia, such as the line put out by Coach.

The rundown is only marginally different from last year’s. Totes-Isotoner and Foster Grant, in the top 10 in 2005, are replaced by Candie’s and Louis Vuitton. The rankings are split between American and European brands.

Merging nostalgia with innovation seems to be the name of the game, such as Nine West announcing its collaboration with hot designers Vivienne Westwood, Thakoon and Sophia Kokosalaki to produce one-off collections for the brand. Candie’s has begun rolling out new categories, including home, fragrance, swim, outerwear and clothing for kids ages four to six.

Liz Claiborne Inc. is celebrating its 30th anniversary this year. Dina Battipaglia, president of Liz Claiborne and Contemporary Accessories, said the brand’s leather handbag collection, which bowed last year in some 200 doors, is expected to be in triple that many points of sale by the end of 2007. The line has been expanded to include small leather goods. For holiday, the company will roll out a collection called Business Class, including business accessories like briefcases, travel bags, agendas and card cases.

Claiborne is also launching a new higher-end presentation box for its costume jewelry line. It will roll out in the fourth quarter of this year and will retail for around $25.

Nine West will enhance its fashion-forward image with new designer collaborations in footwear, handbags and other accessories and select apparel lines, at the brand’s top 20 doors as well as the top 40 Macy’s stores, and online at ninewest.com and macys.com this fall. Prices will be under $500 retail. Nine West said collaborations would continue with a new round of designers next year.

In honor of its 85th year in business, Gucci launched its 85th Limited Edition Collection. Creative director Frida Giannini has come up with five styles — including variations on the signature hobo and tote — in fabrics such as leather, suede, velvet and crocodile, at prices from $1,395 to $24,600. Another key launch this year: the Gucci Twirl watch, a wide cuff-style bracelet-watch that has been featured prominently in the brand’s ads.

It’s predicted to be a strong year for Coach, whose revenues from handbags, small leather goods, footwear, scarves, watches and sunglasses were projected to come in at $2.1 billion for the year ended July 1. The company is on a major expansion drive, expanding and reopening its New York flagship and christening a 3,365-square-foot boutique on Rodeo Drive in Los Angeles. This spring, the firm introduced its first monogramming initiative with a travel collection that can be monogrammed with one’s initials over the company’s famous logo jacquard. For fall, under the tutelage of chairman and ceo Lew Frankfort and president and executive creative director Reed Krakoff, the brand will launch Legacy, a higher-priced collection of bags, shoes, small leather goods and outerwear inspired by fashion designer Bonnie Cashin’s looks for the brand in the Sixties. In October, Coach will also introduce its first cashmere collection in collaboration with Lutz & Patmos for a capsule line of women’s knitwear. And Coach has big plans for Japan, where the company projects to have sales of 80 billion yen (more than $700 million at current exchange) by 2009.

Ray-Ban’s sunglasses and optical frames sold more than 11.6 million styles worldwide in 2005. Owned by Milan-based Luxottica Group SpA, the company has a new brand director, Marcello Favagrossa, and a new ad agency, TBWA in San Francisco. In a nod to the classics trend, the company says it is experiencing revamped interest in the signature Aviator and Wings styles, which have become its top-selling models worldwide.

Chanel’s accessories category, which covers shoes, handbags, costume jewelry and eyewear, launched luggage for fall, and in spring showcased a new Luxury collection. Both have accrued waiting lists at stores. In fine jewelry, Chanel introduced the Les Perles de Chanel collection, recalling its pearl heritage. In retail, the Chicago boutique is undergoing a revamp and will reopen in November, while a new shop is slated to open in the fall in Palm Beach Gardens, Fla.

At Christian Dior, the tradition of creating a new bag shape every five years kicked in last year with its Gaucho bag. For 2006, the company is doing a big push with its reworked version in luxe materials like python and crocodile. For 2007 cruise, it will be available with different hardware and in fabrics such as galucha with metal detailing.

Kenneth Cole is planning to add to its current portfolio of 65 stores with boutiques in the Philippines, Bahrain, Mexico and Taiwan. The first KC Reaction full lifestyle store internationally will open in the Mall of Asia in the Philippines, while the company recently opened a KCNY Footwear and Accessory boutique in Mexico City’s new high-end mall, Antara Polanco. Domestically, there will be a new store in Atlantic City, N.J., and a reopened one in New Orleans. The KCNY brand is being given an elevated platform, while KC Reaction is being repositioned within major department stores.

Invoking its heritage, Louis Vuitton’s Damier Azur line, for fall, is a fresh take on its signature Damier monogrammed canvas. Upcoming openings include a San Francisco boutique based on the model of the Champs-Elysées flagship. Vuitton will also open in Austria, Hungary and the Czech Republic by yearend. Its ad campaign for fall will include Naomi Campbell, Kate Moss and Pharrell Williams.

This article appeared in The WWD 100, a special annual supplement to WWD available to subscribers.