Jennifer Lopez was in Moscow last month to perform at the Muse TV awards, but she didn't leave before paying a visit to her JLO by Jennifer Lopez store at the Crocus City Mall, just outside the city.

By Julee Kaplan and Katherine Bowers on July 3, 2008
View Slideshow 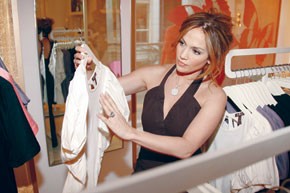 J.LO’S RUSSIAN VISIT: Jennifer Lopez was in Moscow last month to perform at the Muse TV awards, but she didn’t leave before paying a visit to her JLO by Jennifer Lopez store at the Crocus City Mall, just outside the city. This was Lopez’s first visit to the store since it opened in 2004.

“I was so impressed with the entire mall, and the boutique looks fantastic,” she said after leaving the store. “It’s exciting to see the JLO lifestyle all come to life in such a great environment.”

Meanwhile, Sweetface Fashion Co., the parent company for the JLO by Jennifer Lopez brand, plans to open more stores in new territories through next year. Stores are pegged for Europe, the Middle East and in South America. This will add to the 30 stores the firm already operates in Russia, Kazakhstan, Azerbaijan, the Ukraine and Greece.

TAM HEADS HOME: Contemporary designer Vivienne Tam is planning to expand in China with the opening of 150 stores within the next five years. The stores, which will house Tam’s full range of apparel, will be unveiled throughout the country with the help of Ports Design Ltd., an apparel design and manufacturing company with operations based in China and Hong Kong.

“[Ports Design Ltd. knows] the regional markets inside and out,” Tam said. “I’m confident that, together, we will be able to bring innovative designs to the modern Chinese woman.”

Alfred Chan, chief executive officer at Ports, added, “[Tam] is one of the first Chinese designers to establish herself internationally, and I am pleased that we will have the opportunity to work with her to further establish her brand in the Chinese market.”

Tam does business with more than 150 high-end specialty and department stores nationally. She also sells to more than 100 stores globally, including 23 shop-in-shops in Japan. In addition, Tam operates freestanding stores in major cities including Hong Kong, Bangkok, Singapore and New York. Ports Design is the parent company of the fashion firm Ports 1961.

LIQUORED UP: Grey Goose branded vodka has commissioned designer Rachel Roy to create a cocktail dress to be worn by the brand’s spokesmodels at select Grey Goose-sponsored events nationwide.

The black-and-dark blue dress will launch at Roy’s fashion presentation during New York Fashion Week in September, where models dressed in Roy’s design will serve drinks. Grey Goose is the official title sponsor of Roy’s spring show and, afterward, the partnership will extend into sponsored trunk shows.

The cocktail dress is made of a stretch wool with a draped neckline and a cascade of fabric on the back to create a look of fluidity. Roy said she was inspired by Grey Goose’s heritage to create a modern twist on a classic black dress.

BETSEY GETS BLAIR: Rebecca Blair has joined Betsey Johnson as senior vice president of merchandising. Blair will lead the merchandising direction for all divisions within the contemporary sportswear house, including apparel, accessories and footwear. She will work closely with the design, retail, wholesale and licensing teams to facilitate growth and elevate brand image. Blair joins the firm from John Varvatos, where she had been president for a year. Prior to that, Blair was at the Liz Claiborne-owned Juicy Couture, where she spent three years as vice president, general manager of merchandising and sales. Her experience also includes posts at the Gucci Group, Chanel, Prada and Tse. Blair reports to company co-founder Chantal Bacon.

“You’re taking the first photos as a family and you’re in bed wearing this huge [muumuu] with fabric like sandpaper while everybody is snapping pictures,” said Corte.

Made of a stretch, organic cotton jersey, the knee-length dress opens in the back via a series of ties. Soft, twisted straps, an Empire waist and wrap-front décolletage give it a touch of fashion and also allow for breast-feeding.

In consultation with her obstetrician, Corte road tested the garment with the births of her two children, three-year-old daughter Natasha and infant son Lucas.

The dress comes in a drawstring bag, which Corte envisions doubling as a grab-and-go labor kit. The dress wholesales for $44 and comes in steel blue or violet.