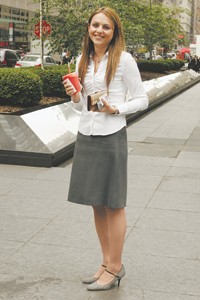 NEW YORK — Much of corporate America still imposes buttoned-up dress codes for the summer months, but a random inspection of women in Midtown Monday proved there are always ways to bend the rules.

Colorful oversized handbags, dangling earrings and stylish shoes were some of the ways women jazzed up their everyday attire. But for most, warmer months don’t seem to call for more revealing outfits. Even workers at the New York City Council have had to spruce themselves up for summer. Right off the bat, rookie City Council Speaker Christine Quinn in February called for a more formal Friday dress code for the 278-person staff, doing away with jeans, T-shirts, sweats and baseball caps.

Near the entrance to J.P. Morgan Chase, Natalie Rabinovitch, an associate in the company’s credit derivatives department, said open-toe shoes are forbidden at the firm and sheers are mandatory, but some women ignore both rules. Dressed in a gray Next skirt she bought in London, a white Gap blouse and Ann Taylor round-toe shoes, she said dressing for the office can be tricky when the thermometer shoots up. “It’s hard in the summer because it’s really hot. You need something light for the office but it needs to be professional.”

A fan of pants and skirts, Rabinovitch said racier dressers were reprimanded when she worked in the firm’s London office. “Some girls wore really short skirts and they would be told off.”

Outside UBS’ Park Avenue offices, staffer Adele Tilebalieva jazzed up a humdrum gray linen suit with Marc Jacobs bow-tied patent leather stilettos. The company’s dress codes are pretty consistent all year long, with business casual being the dominant guideline, she said. She said she typically wears pants and a top, not suits.

Jessica Morris was dressed for her sales associate job at Rainbow Media in white capri pants from the Limited, a Benetton jean jacket and flip-flops. She and her colleagues only dig out their suits for sales calls, and tend to wear them on a more regular basis during the other nine months of the year. “We pretty much wear capris or skirts with a jean jacket. It’s much more relaxed in the summer.”

Damaris Colhoun, an editorial assistant at House & Garden, said her employer, Condé Nast (parent company of WWD), is more concerned with staffers looking fashionable than professional. Dressed in hot pink Etro pants, a brown V-neck Theory T-shirt, a glittery Tse wrap sweater and stacked espadrilles, she said, “For the most part, it doesn’t get much dressier than what I’m wearing. We have casual Fridays but most people are pretty casual all week long. There aren’t any suits. It’s mostly dresses or skirts.”

She described the dress code as “very loose” and noted jeans are particularly popular on casual Fridays.

Interior designer Jemma Magrath opted for dark-dyed Zara jeans with a $10 Charlotte Russe T-shirt Monday and polished up her look with a Gucci handbag and Chanel sunglasses. Though she runs her own business, Interiors in Locust Valley, N.Y., she said she has her own dress code. “I try not to wear what everyone else is buying. I like the low-end and the high-end to mix it up a bit.

“Today I’m just doing research, but I wanted to have some sort of style. It’s definitely part of my job,” she said.