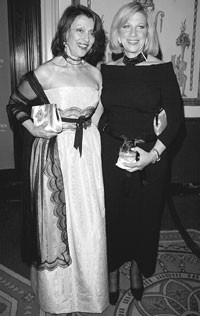 NEW YORK — The joke was on the beauty industry at this year’s Beauty Ball.

Bobbi Brown, founder and chief executive officer of Bobbi Brown Cosmetics — and the recipient of one of the night’s two honors, the Beautiful Apple Award — took the podium after receiving her award and said, “I’m using this night to announce my retirement.” Only after a wave of shock ran through the audience of 575 attendees did she follow up with a relieving “April fool!”

Held on Thursday night, the 29th annual event raised more than $1 million for the March of Dimes Prematurity Campaign, combatting the number-one cause of newborn death. Attendees included comedian and actor Denis Leary and his wife, Ann Leary, whose new book, “An Innocent, A Broad,” documents the couple’s experience with the premature birth of their son.

Dale Crichton, executive vice president of corporate cosmetics for Nordstrom, was also honored at the event, receiving Retailer of the Year accolades. Both awards were presented by Leonard Lauder, chairman of the Estée Lauder Cos. Inc. “Why am I presenting both awards?” asked Lauder. “Because I’m the daddy, that’s why.”

Lauder, who noted that Crichton and Brown were two of his “favorite people in the world,” went on to describe Crichton as a “visionary,” who is “fearless” and “the greatest risk-taker in the cosmetics business today.” A gracious Crichton said that the award was “an honor for my team and for myself.” She thanked the industry for its “partnership and willingness to team up with us.”

In presenting Brown with her award, Lauder described the cosmetics guru as an “advocate for women,” and a family-oriented person, noting that she is “able to balance both parts of her life in a brilliant way.” Brown thanked Maureen Case, the president of Bobbi Brown Cosmetics, and Margo Gerard of the Bobbi Brown Charity Foundation, among others.