Makeup artist Paul Starr has beautified a bevy of famous faces over the years. 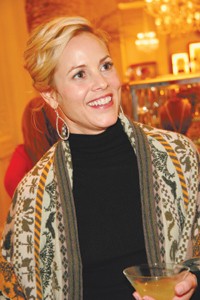 Bergdorf’s Hosts Starr-Studded Book Launch
NEW YORK — Makeup artist Paul Starr has beautified a bevy of famous faces over the years — and Thursday night at Bergdorf Goodman, several of them showed up to celebrate the publication of his new book, “Paul Starr on Beauty: Conversations With 30 Celebrated Women” (Melcher Media).

The event was hosted by John Demsey, global president of the MAC Cosmetics and Estée Lauder brands. Starr is the latter brand’s national makeup artist.

At least one star made it clear that she was leaving the prettifying to Starr. “Oh dear God, no,” Maria Bello said with a startled laugh when asked if she was seeking a beauty deal of her own. “My friends would be surprised if I showered more than twice a week!”

Clad in a patterned Stella McCartney coat, she made it clear that she is more interested in her latest film projects than in peddling perfume. Her latest film, “A History of Violence,” which also stars Viggo Mortensen and Ed Harris, has just opened.

Bello is also in town for preproduction work on her next film, tentatively titled “September,” which deals with the events of 9/11 through the eyes of two Port Authority officers trapped in the rubble. That film, which is being directed by Oliver Stone, also will star Nicolas Cage and Maggie Gyllenhaal.

Jada Pinkett Smith, who took her own step into the beauty field by investing in indie brand Carol’s Daughter earlier this year, is appearing in advertising for that brand and plans to continue to do so, although she’s not looking for a perfume deal, either. “I doubt it,” she said in response to the question. “I’m busy being a mom and a wife, and with Wicked Wisdom, my band.” The group will release a CD in January, which Pinkett Smith calls “progressive, aggressive rock.” She added, “I just did Ozzfest, which should tell you something.”

Meanwhile, MAC Cosmetics was honored last week by the Global Business Coalition on HIV/AIDS for the work of its MAC AIDS Fund.

The GBC, which held a gala ceremony headlined by Secretary of State Condoleezza Rice at the John F. Kennedy Center for the Performing Arts, gave awards to a number of companies active in the global AIDS fight, including Bristol-Myers Squibb, Getty Images, Virgin Unite, De Beers and Volkswagen of South Africa.

MAC Cosmetics, which won the Core Competency Award, has raised more than $48 million for AIDS-related research since the fund was founded in 1994.
— Julie Naughton

For P&G, approval from the U.S. antitrust authorities required several concessions, such as shedding brands in categories where the companies have overlapping businesses. Following the closing, P&G will spin off Gillette’s Rembrandt oral care line and Right Guard deodorant. The company also will make two additional Gillette deodorant brands, Soft & Dri and Dry Idea, available for purchase by the Right Guard buyer. P&G expects to complete the required divestitures between now and December.

In September, P&G announced plans to divest SpinBrush to comply with the European Commission’s clearance provisions. The company has agreed to sell the SpinBrush franchise of battery-operated toothbrushes to Church & Dwight, the maker of Arm & Hammer toothpaste.

The FTC’s blessing follows approval from P&G and Gillette shareholders, and clearance from the EU in July. The merged company plans to hold its first analyst meeting today at the New York Stock Exchange.
— Molly Prior

The new West Village outpost, whose soft opening was Sept. 15, has the cozy feel of a 19th-century town house, with quirky touches such as a striking magenta chandelier and the requisite free-form Bond No. 9 mannequins.

Laurice Rahme, founder of Bond No. 9, said she couldn’t have asked for a better location for the store. “To be next to Magnolia Bakery with all of the smells, you cannot get a place with more smells in New York — in a good sense, at least — than Magnolia,” she said. Industry sources estimate the 500-square-foot boutique could do upward of $700,000 in retail sales in its first year.

“We’re a small company opening a store in the middle of an economic crisis, so it’s very gutsy [to open a store] these days,” said Rahme. “But it’s also not so gutsy when you see what’s happening on this part of the street.” She noted that Ralph Lauren is slated to open its third store on Bleecker in the near future.

To commemorate the store’s opening, Bond No. 9 will launch its 24th scent, aptly named Bleecker, next month. The fragrance features notes of vanilla, cassis, caramel, cinnamon, thyme, musk and patchouli. The bottle, created by fashion designer and artist Rachel Katz, was inspired by the intersecting gold arch design of the original New York City subway token, and features shades of magenta, lime green and chartreuse. Bleecker is priced at $25 for a 2-oz. spray bottle and $185 for the 3.4-oz. artist-designed bottle. Industry sources expect the scent could do upward of $500,000 in its first year at retail.
— Bryn Kenny