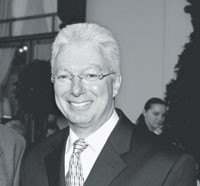 Following Gillette Deal, P&G Reaffirms Growth
NEW YORK — Consumer products giant Procter & Gamble Co. completed the $57 billion acquisition of Gillette Co. on Saturday, and on Monday reaffirmed its confidence in the success of the merger as well as its long-term financial growth plans.

“I remain as confident today as I was in January that combining Gillette and P&G makes sense for consumers, for our customers, for our employees and for shareholders alike,” P&G chairman, president and chief executive officer A.G. Lafley said Monday during the company’s first analyst meeting as a merged entity. “The question I want to address with you today is, ‘Are we going to make this a big success?’ I am confident this combination will not only work but also thrive.”

The company said the dilution to earnings-per-share remains the same after adjusting for actual deal closing timing. The deal closed on Oct. 1 as opposed to around July 1, as previously anticipated. Dilution to earnings per share is seen as 20 to 26 cents in fiscal year 2006 and 12 to 18 cents in fiscal year 2007. The merger is expected to be neutral to EPS for fiscal 2008, becoming accretive to earnings in the back half of that year.

P&G upped its top-line growth rate guidance in the balance of this decade to 5 to 7 percent, excluding foreign exchange impacts, up from a prior forecast for 4 to 6 percent. Clayton Daley, chief financial officer, said the company expects to create $4 billion to $5 billion of value by accelerating top-line growth by 1 percent annually through 2010.

Meanwhile, Lafley said his confidence in the merger stems from four factors: both companies already have strong business momentum; the combined company has “a pipeline of innovation we can commercialize with the industry’s largest portfolio of leading global brands;” meaningful cost synergies can be achieved, and the companies are “focused on the same strategies, leveraging the same core strengths and operating with similar values, commitment and excellence.”

Regarding brands, Lafley said the merged company has a diverse mix that can help it “provide retail partners with a larger and more profitable mix of brands and products, broader and deeper consumer and shopper knowledge, more product and marketing innovation and many more supply chain solutions.

“Innovation remains the primary driver of sales and earnings growth in the consumer products industry,” Lafley added, “and we are committed to studying the pace of innovation and being the benchmark for innovation, commercialization [and] success.”

Meanwhile, Lornamead Group, the U.K. beauty concern, announced Monday it acquired the Yardley fragrance and toiletries brand from P&G. While terms of the deal were not disclosed, market sources used the industry yardstick of one-times-sales to estimate the value of the transaction.

Yardley, which manufactures Old-World style talcs, soaps and scents, rings up global retail sales of about $100 million, according to Lornamead.

“We believe there is considerable scope to expand Yardley, exploiting the awareness of the brand worldwide as well as [in] new distribution channels,” stated Mike Jatania, ceo of Lornamead. A spokeswoman for P&G Prestige Products Inc. said the Yardley luxury toiletries brand did not fit into the firm’s mission of building global blockbuster brands and regional stars, so it divested the business, which accounted for about an eighth of 1 percent of the total P&G beauty business.

Lornamead, which is owned by the Jatania family, has a strategy of acquiring brands that are noncore to multinational companies. Its brand portfolio includes the Harmony and Te Tao hair care brands. Lornamead also said it is looking into other acquisition opportunities.
— Meredith Derby with contributions from Brid Costello

Boots, Alliance UniChem to Merge
LONDON — Boots is about to grow a size bigger, and become part of what could be Europe’s leading retail pharmacy firm.

The duo will form Alliance Boots, an entity comprising almost 2,700 pharmacies across Europe and generating sales of more than 13 billion pounds, or $22.8 billion at current exchange.

The deal, which the companies claim will form Europe’s leading retail pharmacy firm, is expected to be completed next year, subject to regulatory and shareholder approval.

“This is very much a merger of equals,” said Sir Nigel Rudd, Boots’ chairman, during a news conference here Monday. Rudd will hold the same position at Alliance Boots, while Richard Baker, currently chief executive of Boots, will also be ceo at the new company.

The merger should kick-start international expansion for Boots, since Alliance UniChem brings 1,250 pharmacies to the table, including more than 300 outside of the U.K., in countries like Norway, the Netherlands, Italy and Switzerland.

Boots, which runs 1,400 doors in the U.K., has 100 pharmacies in Thailand and Ireland, plus a partnership arrangement in the Middle East. Executives said they envision “a pipeline of existing acquisition opportunities in new geographical markets.”

“I’m generally enthusiastic about the deal,” said Peter Brockwell, a London-based analyst at West LB. “It gives Boots a credible pan-European growth profile that the organization has been lacking to date.”

As part of the deal, Alliance UniChem’s stores will be rebranded as Boots. Following the merger, in the U.K., Boots will have 1,500 “community pharmacies,” focusing mainly on prescription medication and health care service, and 800 “health and beauty stores.”

Boots shareholders will own 50.2 percent of Alliance Boots and Alliance UniChem will own the remainder.

The merger comes as Boots tackles stiff competition from supermarkets — such as Tesco and the Wal-Mart-owned Asda, which are competing on price — and a general slowdown in U.K. High Street retail sales.

“To us, this seems a short-term ‘win’ situation, but in our view, it will be unlikely to solve the major problem — how to compete with the superstore operators,” London-based Seymour Pierce said in a research note Monday.

Meanwhile, there is also speculation in the press that a deal might not go through. Press reports have suggested that private-equity players might be looking into Boots as a possible acquisition target, and such a bid — if successful — would nix the Alliance UniChem deal.

“Whilst we are certain that private-equity buyers have been looking at Boots, we wonder whether anyone will be brave enough to strike at this time of uncertainty in the retail arena,” said Seymour Pierce in its note.
— B.C.

According to A.S. Watson’s managing director, Ian Wade, the acquisition “is in line with our long-term strategy to expand in Eastern Europe and it will help us to establish our footprint in Russia.” A.S. Watson will take over Spektr in the next few months.

The deal is the latest in a string of recent A.S. Watson acquisitions, including France’s Marionnaud Parfumeries, the Netherlands’ Portegies drugstores and Malaysia’s Apex Pharmacy. A.S. Watson’s first store in Estonia is due to be opened in mid-October, extending the company’s reach to 34 markets.
— Ellen Groves