Jane Cosmetics wants to up its standing in the mass market with the help of a cash infusion from two private equity groups. 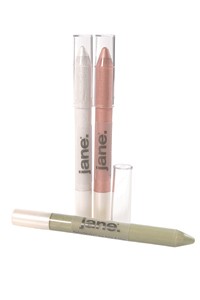 Jane Cosmetics Gets Cash Infusion
MIAMI — Jane Cosmetics wants to up its standing in the mass market with the help of a cash infusion from two private equity groups.

The company has linked arms with Stone Canyon Venture Partners, with holdings that include the luxury gifts retailer Gump’s, and The Walnut Group, an investor in consumer brands such as Build-A-Bear, and in entertainment ventures, including the Broadway productions of “Hairspray” and “Jersey Boys,” to build Jane into an aspirational brand with ties to the entertainment world.

“Jane as we know it will have a lot more capital for advertising, retail tie-ins, and promotions and product development,” said Yarnell. “We had disappointed retailers in the past, where we couldn’t grow as fast as they wanted us to grow,” she added.

Yarnell, along with a silent investor, purchased the fledging cosmetics brand from the Estée Lauder Cos. in 2004, and spent the next year repositioning it from a teen brand to a value line tailored to women 19 to 39 years old.

The brand, which generated less than $20 million in sales in 2004, had lost favor with retailers once the teen cosmetics trend bubble burst. As a result, its store count had dwindled to 7,500 doors. Today, the brand is housed in 2-foot to 3-foot displays in roughly 10,000 doors, and Yarnell expects the company to reach $50 million in sales within the next two years.

“We think that Jane can touch a lot of people who have moved from department stores to drugstores,” said James M. Gould, managing general partner of The Walnut Group, which also invests in the spa Skinklinic. “The brand has untapped potential. We just have to establish its story and differentiate it from other brands on the shelf.”

The company will rely on board members, who include Gould; John A. Davis, founder, chairman and ceo of Davis Entertainment Co.; Frederic H. Mayerson, chairman and managing general partner of The Walnut Group, and Michael J. Seibert, founding member of Stone Canyon Venture Partners.

This story first appeared in the June 1, 2006 issue of WWD. Subscribe Today.

Yarnell intends to take advantage of their connections to Hollywood and Broadway. She noted that the two investment firms are interested in introducing Jane products to film and theater makeup artists and finding an up-and-coming actress to be the face of the brand.

Yarnell said, “We are going to be making sure customers know who we are.”
— Molly Prior

Roberts to Avon Reports Unfounded
NEW YORK — It looks like Salma Hayek will have to go it alone as Avon’s spokesmodel for the time being. Media reports, which surfaced Wednesday, that the direct seller was close to signing Julia Roberts for $2 million to $4 million are “simply not true,” declared Roberts’ publicist, Marcy Engelman. Avon also denied the speculation. “It is not true and we are not in negotiations with Julia Roberts,” said an Avon spokeswoman.
— M.P.

Cameron in PureBeauty Buyout
NEW YORK — Cameron Capital Corp., the private investment firm that six weeks ago bid on PureBeauty Inc., received approval May 25 from the U.S. Bankruptcy Court for the Central District of California to acquire substantially all the firm’s assets.

PureBeauty voluntarily entered into bankruptcy after a purchase deal had been inked with Cameron Capital. The purchase price for 43 of the chain’s 48 units was approximately $10 million, according to Steven K. Hudson, president and chief executive officer of Cameron Capital.

On May 17, Cameron Capital also acquired retail chain BeautyFirst, which is based in Wichita, Kan., and sells professional skin and hair care products, and also offers spa and salon services. Industry sources estimate Cameron Capital paid about $17 million for the 84-unit operation, which has Detroit, St. Louis and Indianapolis as its principal markets.

“We believe that women are seeking a solution for skin and hair, and traditional sales is not the way to go,” Hudson said.
— Andrea Nagel

Sakas Exits Kevyn Aucoin Beauty
NEW YORK — Eric Sakas resigned from his position as president and creative director of Kevyn Aucoin Beauty last week, a post he held for five years. Sakas described his tenure at the company as “a labor of love in helping to maintain Kevyn’s vision and legacy.” Sakas was Kevyn Aucoin’s former business partner and worked closely with Aucoin, who died in 2002, to develop the line. Of his decision to leave the company, Sakas said: “It got to the point where the business could stand on its own, and I could move on to pursue my interests.” He is seeking other opportunities in the fashion and beauty industries.
— Crystal Martin

In a two-part course, attendees first learn about the physiological makeup of skin and the active ingredients used to treat it, and then participate in workshops, learning how to apply a peel or a mask, for example.

“There is definitely interest from a certain number of customers,” said Delphine Loviat, the store’s manager, who teaches the classes. “Men want to know how best to apply products, like an eye contour cream, but sometimes don’t dare to ask. We want to de-dramatize and take the guilt away.”

Evening classes will be held twice a month after regular store hours, a schedule that began last week.
— E.G.