L'Artisan Parfumeur is hoping its men's business will grow under the influence of its latest fragrance, Fou d'Absinthe (Mad About Absinthe, in English). 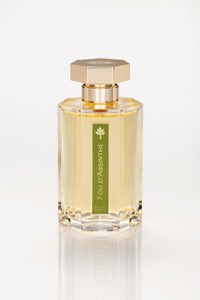 L’Artisan Looks to Up Male Clientele With New Scent
PARIS — L’Artisan Parfumeur is hoping its men’s business will grow under the influence of its latest fragrance, Fou d’Absinthe (Mad About Absinthe, in English).

The scent, inspired by the potent hallucinogenic alcoholic drink, which was a favorite tipple among bohemian artists and writers, will bow globally later this month.

“Given that 90 percent of our clientele is female, we decided to launch a male scent to encourage men to push open the door [to our stores],” said Rémi Cléro, the firm’s president and chief executive officer.

Working with only the word absinthe as a brief, independent perfumer Olivia Giacobethi created a spicy, woody juice. Its top notes include the bitter liquor and fruity accords of black currant. Its heart comprises spicy notes of rum, pepper, clove, nutmeg, ginger and patchouli, while its base features pine needles and balsam. Ingredients were supplied by Grasse, France-based Robertet.

Fou d’Absinthe will be available as 100- and 50-ml. sprays, which will retail in France for 95 euros, or $122 at current exchange, and 70 euros, or $89, respectively. Industry sources estimate the scent could generate more than 1 million euros, or $1.3 million, in its first year at retail.

Also in the L’Artisan launch pipeline for this year is a fragrance based on a harvest of narcissus flowers and a new addition to its line of scents inspired by countries. The privately held company, which sources estimate generated about $40 million in sales last year, plans to open 10 new stand-alone doors this year, including a door in Japan and a boutique in Paris’ Caroussel du Louvre. Last year, the firm generated 45 percent of sales in France, 25 percent in the U.S. and 15 percent in the U.K. In 2004, 65 percent of its sales came from France.
— Ellen Groves

Beer Unveils New Line
LOS ANGELES — With innovative ingredients like self-heating bamboo crystals and coenzyme Q-10 at the heart of his skin care formulations, dermatologist Kenneth Beer is hoping to distinguish his new treatment line in a crowded cosmeceuticals arena.

The Palm Beach Peel, a 20-item line that was recently launched on Beer’s Web site and is being shown to major upscale department stores, was created to showcase, according to Beer, the style and sophistication synonymous with West Palm Beach, where the doctor has his practice.

“I’ve taken what I’ve learned in 10 years of practice and turned it into a scientifically valid skin care line,” said Beer, who has just published his first book, “Palm Beach Perfect Skin.”

The products were founded on a few key ingredients that have proven effective in antiaging. A Retinol Recovery System serum, available in three strengths, is designed to treat fine lines, wrinkles and mottled pigmentation. The Eye Rescue Formula, which contains vitamins A, C and E, as well as green tea extract and coenzyme Q-10, is for minimizing wrinkles around the eyes.

“Rather than mix everything together, each product has separate ingredients. So whether the skin type is fair or medium, or whether the user is 30 or 60, there is a skin care regimen that makes sense.” Other products are a Foaming Face Cleanser and an Eyelid Lightening Serum. Beer said the line was being targeted at retailers such as Sephora and Bergdorf Goodman, as well as day spas. He expects wider distribution for the line in the next six to 12 months. Prices are between $40 and $100 at retail.
— Kavita Daswani

N.Y.C. Cosmetics’ Ad Blitz
NEW YORK — N.Y.C. New York Color Cosmetics has revved up its “Dare to Compare” advertising campaign with a six-city mobile tour. Steering N.Y.C.’s namesake van is the value-priced brand’s makeup artist Doug Atkinson, who is charged with showing consumers how to create a makeup look for less. To demonstrate the “Dare to Compare” theme, Atkinson will make up two women side by side — one with pricier, department store products and the other with N.Y.C.’s items. The tour kicked off here May 5 and 6 and in June it will make stops in Boston, Chicago, Minneapolis, Dallas and San Antonio.