With the opening of L'Artisan Parfumeur's third New York store on Madison Avenue and 82nd Street here June 19, the French firm is pressing forward with a retail expansion strategy that calls for a total of 20 stores in the U.S. by 2008. 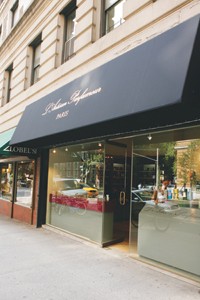 NEW YORK — With the opening of L’Artisan Parfumeur’s third New York store on Madison Avenue and 82nd Street here June 19, the French firm is pressing forward with a retail expansion strategy that calls for a total of 20 stores in the U.S. by 2008.

Even as L’Artisan officially unveils the Madison Avenue boutique with a soirée at the store tonight, the company is working on the fall opening of a fourth New York location, on the Upper West Side. In the next two years, the company is planning to open three more New York stores — for a total of seven here — and 10 more throughout the U.S., including in cities like San Francisco, Los Angeles and Chicago.

“This is a comeback for L’Artisan,” François Duquesne, president of L’Artisan Parfumeur U.S., said of the new Madison Avenue store. “We used to be on Madison Avenue, and now we’re back,” he added, noting the previous boutique on Madison and 71st Street closed nearly eight years ago.

Duquesne referred to the new shop on Madison as L’Artisan’s U.S. flagship, and he expects the store to be the number one U.S. location in terms of sales.

While he declined to discuss sales projections for the shop, industry sources estimate the Upper East Side store could do about $1 million in first-year sales. The 500-square-foot shop follows the design of other L’Artisan Parfumeur store concepts, with elements that include a fragrance bar featuring the brand’s full assortment of 35 fragrances, as well as its full home collection of 15 fragrances.

“We’re reviving the tradition of a perfumery [as] a destination where you’re able to visit a [fragrance] expert in your neighborhood,” said Duquesne. The firm’s two existing New York stores are in SoHo and on the second floor of Henri Bendel. It also has a shop-in-shop at Studio at Fred Segal and a store located in Montreal.

“We’re excited to be in the heart of where our consumers live,” Duquesne continued. “These are well-traveled, cultured and sophisticated customers who recognize the artisanship and innovation that we offer. We will continue to grow our retail business and develop our business model.”

Currently, L’Artisan’s freestanding boutiques generate half of the firm’s $5 million in U.S. sales, while its wholesale distribution network, which includes stores like Neiman Marcus, Barneys New York and independent boutiques, accounts for the remainder of sales.