Marcella Cacci, president of Burberry fragrances, has resigned for personal reasons, according to the brand's licensee, Inter Parfums SA. 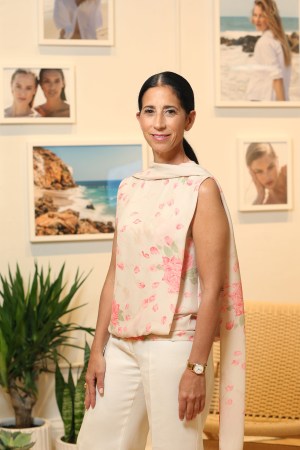 This story first appeared in the May 16, 2006 issue of WWD. Subscribe Today.

Cacci will leave the company on June 30.

She had held her current position since March 2005. Prior to that, Cacci spent five years as Burberry’s vice president of global licensing.

The Burberry brand is the star of Inter Parfums’ scent constellation, which includes such names as Christian Lacroix, S.T. Dupont and Paul Smith. The Burberry fragrance business rang up retail sales of about 400 million euros, or $507.5 million at average exchange, in 2005. Inter Parfums SA forecast that figure could spike to between 600 million and 650 million euros, or $769 million to $833.2 million at current exchange, by 2008.

“Marcella’s contributions to the development of the Burberry fragrance business have been significant,” said Philippe Benacin, Inter Parfums SA’s president and chief executive officer, in a statement. “She will leave Inter Parfums with having strengthened the distribution network, accelerated our marketing strategies and further developed the product offer, including the launch of the new Burberry London line. I and the team at Inter Parfums would like to thank her for all her efforts.”

No successor has been named to replace Cacci.

Patel, renowned for her facials, has been tweaking products used in her Vaishaly salon in the tony Marylebone neighborhood here for years.

“I used to add essential oils to products to make them more active,” she said. “It was a natural progression to introduce my own products, partly because I never found a range that I was totally happy with.”

So she came up with Vaishaly, a seven-unit line of skin care staples meant to simplify treatment rituals. “My whole philosophy has been to keep it simple,” she said.

Patel constructed the line around two skin types — dry-sensitive and normal-combination. All products are made with natural ingredients, many of which are organic and include active ingredients for antiaging.

Products for sensitive and dry skin include a redness-reducing concoction of arnica, ginkgo and calendula.

The line comprises Vaishaly Cleansing Balm, a cleanser based on sweet almond and olive oils for dry-sensitive skin, and Vaishaly Facial Wash, based on a sugar-derived ingredient for normal-combination skin.

To recall the line’s salon origins, instructions on how to apply products properly and a massage guide are included in every pack.

Vaishaly was launched in Harvey Nichols department stores in the U.K. and in Patel’s salon over the weekend.

Industry sources estimate the collection will generate 500,000 pounds, or $942,800, in wholesale volume its first year.

Patel is depending on word of mouth to boost the line’s launch — and it seems to be working. Waiting lists for the products have already been set up at the Vaishaly salon at Harvey Nichols.
— Brid Costello

SPF: A New European Standard
PARIS — Labels on European sunscreen products are getting a new look.

The European Commission recently announced draft recommendations that the beauty industry adopt a standard, easy-to-understand labeling system for sunscreens as of 2007, following public consultation this year.

The move was in response to weaknesses in how sunscreen products are labeled, the commission said in a statement. The sun protection factor, or SPF, of products indicates only protection against sunburn, or UVB radiation. The SPF tells consumers nothing about protection from UVA radiation, which causes premature aging and contributes to skin cancer. “Consumers must be made fully aware that no sunscreen product can provide 100 percent protection against hazardous UV radiation,” said Markos Kyprianou, commissioner for health and consumer protection, in the statement. “There are serious health risks, such as skin cancer, linked to insufficient protection from the sun. European Union citizens need to be fully informed about what sunscreens will and will not do for them.”

The EU will recommend that sunscreen labels indicate UVA protection levels and have clear application instructions. It will also recommend that manufacturers not claim their products offer complete protection from the sun by using the word “sunblocker.” Retail sales of sunscreen in Europe, where such products are considered cosmetics, stood at 1.3 billion euros, or $1.7 billion at average exchange in 2004, according to the EU. In 2005, sales increased by 4 percent.
— Ellen Groves