By Pete Born and Molly Prior on January 23, 2007
View Slideshow 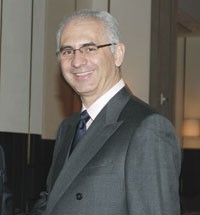 The brand, which was founded in 1991 by New York dermatologist Howard Sobel and nutritional consultant Elaine Linker, was purchased from North Castle Partners, a private investment firm that bought HDS in April 2004. The terms of the sale to P&G were not disclosed.

Market sources estimated, however, that P&G paid $50 million to more than $90 million, based on three to four times the sales volume of DDF.

P&G was motivated by a desire to expand and extend its reach into the prestige beauty market. DDF, which is based in Yonkers, N.Y., will become part of the P&G Global Skincare division of the Cincinnati-based consumer products giant. Paolo deCesare, president of the skin care division, said the acquisition fits into the corporate vision of pursuing skin care as a key growth category. Speaking by phone from his office in Geneva, DeCesare described the move as plugging “the sweet spot” between the division’s two existing treatment brands, the mass market giant Olay and the high-priced, high-octane SK-II.

“We are looking for opportunities to expand our portfolio to reach new consumers,” he said, adding that the acquisition will sit comfortably between the two existing brands in terms of price point, distribution and consumer profile.

For instance, a DDF moisturizer ranges in price from $40 to $80, which is situated well above the drugstore-oriented Olay, but below SK-II, where a similar product retails for $80 and above. DeCesare talked about the “upside” opportunities for P&G in leveraging the large pool of knowledge it has gleaned from marketing skin care in the mass and upper markets, and pairing that experience with P&G’s global reach. The company said it expects to infuse the brand with consumer-oriented product innovation. Add to that the new distribution channels and new consumers provided by DDF.

DeCesare pointed out the pioneering role of DDF in being one of the first brands founded by a well-known dermatologist, with a roster of celebrity clients. He said Sobel has provided “very fruitful cooperation” and has committed himself to a “smooth integration” with P&G. But DeCesare would not comment beyond that point.

For the past year, DDF has been led by chief executive officer Joe Hawley. DeCesare noted that he also will remain through the transition.

P&G stands to gain a diversity of distribution with the addition of DDF. In the U.S., SK-II is focused mostly on Saks Fifth Avenue and Bloomingdale’s. DDF, on the other hand, is carried by specialty chains, like Sephora and Bath & Body Works, Nordstrom, Harvey Nichols in London, in select spas and select Internet sites. DeCesare said the distribution, mostly lumped in North America, counts in “the hundreds” of doors, not including spas.

DDF is sold in more than 325 doors in the U.S., according to a DDF spokeswoman, who added the brand is also carried in more than 2,000 spa/medi-spas around the world — with premier accounts such as Canyon Ranch and Agua Spa at The Delano in Miami. DDF products are sold in 15 countries, mostly through distributors.

DeCesare declined to discuss numbers, and P&G does not break out sales projections. But industry sources estimate DDF does about $30 million at retail in North America and perhaps $40 million worldwide.

DeCesare described the consumer profile as standing just below the SK-II users. While the premium brand appeals to the top 1 percent of the market, he said, DDF is “a much broader play.” This new customer “wants a high degree of sophistication. They want it organized into regimens and they are willing to invest more.”

P&G describes the brand, which was created with medical protocols from Sobel, as a collection of problem solving products to help with antiaging, acne, hyperpigmentation and sun protection. “DDF is designed for self selection,” DeCesare said, noting that the brand is doing well in Sephora.

“It’s a minor deal, but it’s in the right area,” said A.G. Edwards & Sons analyst Jason Gere, who had anticipated that P&G would opt for small, tuck-in acquisitions that would fit into the firm’s core focus. “It gives P&G more penetration in prestige,” Gere said of DDF. The analyst said he would like to see P&G continue to build its portfolio of existing brands by expanding them to new product categories and markets, as the firm has done with Hugo Boss.

Another analyst acknowledged that there still is plenty of room for marketing development between Olay and DDF and SK-II, as P&G continues to chase the high-end consumer. Wondering aloud, William Chappell, analyst with SunTrust Robinson Humphrey Capital Market, said, “this is the start of multiple acquisitions to build up the space.”