By Meredith Derby on May 1, 2006
View Slideshow 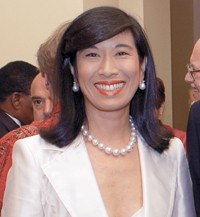 “We are pleased that as the year began we came out of the gate with a great sense of energy and urgency,” Andrea Jung, chairman and chief executive officer of Avon, said on a post-earnings conference call with Wall Street, referring to the firm’s turnaround efforts. Belt tightening will also include the closing of the company’s iconic Trump Tower Avon Salon & Spa, which opened in 1998 at 725 Fifth Avenue.

Jung said on the call, referring to the spa closure, that the company wants to “focus our investment to drive the kind of return in which ways that are globally going to take the brands to the next level.”

She added: “We [are] committed to restoring Avon’s sustainable growth as we go forward. That’s our destination. We have got one quarter behind us, but I think we are taking good first steps on the journey.”

Operating profit fell 67 percent to $86.2 million, negatively impacted by $12 million due to the adoption of stock option expensing. In addition, the operating profit was hurt by $120 million in costs related to implementing the restructuring, which included such initiatives as outsourcing customer service transactions and exiting certain unprofitable operations.

As a result, operating margin in the quarter significantly declined to 4.3 percent from 13.9 percent a year ago. Also part of the restructuring efforts, the company upped by 57 percent to $40 million its advertising spending in the first quarter in order to increase brand competitiveness, particularly in skin care.

“Some early proof points confirm our belief that the combined power of improved product innovation and increased advertising are the formula for sustainable growth in this business,” Jung said on the call.

This story first appeared in the May 1, 2006 issue of WWD. Subscribe Today.

In all, New York-based Avon expects to save $300 million annually when the restructuring — which also includes removing layers of management and realigning global manufacturing, procurement and distribution processes — is complete. Restructuring plans were first announced in mid-November following a tough 2005 when net earnings were flat at about $850 million and revenues rose 5.2 percent to $8.15 billion.

Avon reiterated in a filing with the Securities and Exchange Commission last Monday that the estimated cost of the restructuring increased to about $500 million from an initial estimate of $300 million to $500 million, before taxes. In the filing, the company also said its board approved the elimination of an additional 1,300 jobs, which should be completed in 2006. About $70 million in charges were taken the first quarter as a result of the employee terminations, the company said in the filing. Over 3,300 job reductions have been announced since restructuring plans were revealed.

Shiseido Returns to Profitability in ’05
TOKYO — Shiseido Group traded in red ink for black when it came to net income for the fiscal year ended March 31.

On a consolidated basis, net income was 14.4 billion yen, or $131.1 million, from last year’s net losses of 8.9 billion yen, or $81.1 million. This was “despite reporting an extraordinary loss related to the application of impairment accounting, as well as an impairment loss on a U.S. subsidiary,” the company noted.

Income from operations jumped 37.8 percent to 38.9 billion yen, or $354.3 million, compared with the prior year. “In addition to growth in domestic and overseas sales, this was attributable to factors including a decline in personnel expenses associated with the adoption of our Special Early Retirement Incentive Plan in the previous fiscal year,” the firm said.

Domestic sales of cosmetics rose 2.2 percent. Shiseido launched its Maquillage makeup assortment and retooled the men’s line Uno, positioning them as “megabrands” designed to win in their respective categories. “We made a good start in our effort to seize top market shares for these lines through focused allocation of expenditures and promotional activities,” said the group.

Overseas cosmetics sales grew 10.1 percent in local currency terms and 13.3 percent on a yen-denominated basis. During the year, Shiseido’s cosmetics business benefited from increased sales in all regions, led by the key Chinese market. The firm cited its namesake brand, fragrances marketed by its Beauté Prestige International arm and the Decléor and Nars brands. Overseas sales accounted for 29.4 percent of total sales volume compared with 27.5 percent in the last fiscal year.

“Growth in China was particularly prominent.” Shiseido noted. “The yen depreciated slightly against the U.S. dollar, euro and Asian currencies on the whole, and sales in yen terms increased in all regions,” the firm said, adding, “sales in all regions increased in local currency terms.”

For the next fiscal year, Shiseido forecasts a 2 percent increase in consolidated net sales, to 685 billion yen, or $6.01 billion at current exchange rates; an 11 percent rise in income from operations, to 43 billion yen, or $377.6 million, and a 59 percent jump in net income, to 23 billion yen, or $202 million.
— Koji Hirano