Sundari is launching a body line and collaborating with The Spa at Equinox for four new treatments; Shalini adds its first fragrance. 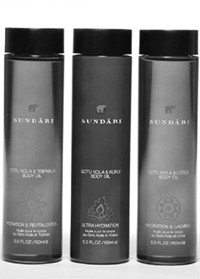 NEW YORK — Sundari, the Ayurvedic skin care company, is placing its focus on the body.

This story first appeared in the November 10, 2003 issue of WWD. Subscribe Today.

There is the debut of the Sundari Body Collection this month, and also a collaboration with The Spa at Equinox to create four new treatments.

The collection is based on the ancient Indian herb Gotu Kola, traditionally known as Brahmi. “It can be used in the spa by massage therapists and at home on a personal level to hydrate, revitalize and firm the skin,” said Ayla Hussain, chief executive officer of Sundari. “We found that firming and toning is something that comes naturally from Gotu Kola and it’s the theme running throughout the body line.” Based on ancient Indian beliefs that mind, body and spirit are entwined and, therefore, affect the skin, the company claims the body products rejuvenate and revitalize the entire body while soothing the mind.

Industry sources estimate the line could ring up as much as $1 million in its first year at retail.

The collection consists of Gotu Kola and Triphala Body Oil, Gotu Kola Lotus Body Oil and Gotu Kola and Kukui Body Lotion. Each comes in a 5-oz. bottle for $24. The Body Collection will be available at all Barney’s locations and Sundari.com, in addition to The Spa at Equinox.

To promote the collection, in-store brochures and information will be available, as well as deluxe samples. “But really the promotion comes from the people — the massage therapists and aestheticians who are using it,” said Hussain.

Sundari was sold in February 2003 to Mumbai, India-based Marico Industries Ltd., a $142 million conglomerate that chiefly produces oils for consumer and personal care products. Hussain said, “Because the company is based in India, it allows us access to research a lot of new ingredients that are really authentic. That’s been very helpful.”

NEW YORK — Shalini Kumar, whose women’s fashion collection was launched under the Shalini label in 1997, has created her first fragrance.

The limited-edition scent, also called Shalini, is set to launch exclusively at Bergdorf Goodman in mid-January. Individually numbered bottles — from one to 900 — will be produced and each will be priced at $900.

The fragrance is a floral concoction featuring a backbone — as the designer put it — of tuberose, neroli, sandalwood and musk. “I love tuberose,” said Kumar, whose memories of the aroma stem from growing up in London and Bombay, “but I had not found a fragrance [on the market] that I loved.” She collaborated with Maurice Roucel of Symrise to come up with the blend, which also mixes ylang- ylang, muguet and vanilla accords.

Lalique created the scent’s frosted crystal bottle; the closure is meant as an interpretation of a butterfly wing — “almost taking flight,” said Kumar.

Further rollout plans for the scent have yet to be determined, but the Shalini fashion label, which principally comprises clean, geometric eveningwear designs —and, more recently, some daywear and suitings — is carried in about 20 U.S. doors. Among these are Barneys, which originally launched the apparel collection; Bergdorf’s; Linda Dresner; Stanley Korshak in Dallas, and Mario’s in Seattle. Shalini’s overall business is said to generate about $6 million in annual sales.

Shalini’s future fragrance plans call for line extensions, including a glass-bottle version of the signature scent and an ancillary collection of body products in 2005. Additionally, the designer has plans for a home fragrance collection of candles, pillow mist, scented stones and soaps.

But it’s the inaugural fragrance for now, according to Kumar, who noted that customers have begun reserving numbers within the limited edition range — including Roucel, the perfumer, who has dibs on number two.