Backstage at the Victoria’s Secret fashion show, there are no models that are “your average joe.” Here’s why. 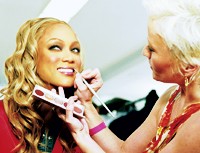 NEW YORK — The backstage experience at the Victoria’s Secret Fashion Show is bigger than anything found at Fashion Week. But what would you expect to find behind the scenes at the world’s most-watched fashion show?

This story first appeared in the November 17, 2003 issue of WWD. Subscribe Today.

“It is very different,” said Charlie Green, Victoria’s Secret Beauty’s premier makeup artist and spokesperson. “You’ve got a room full of the most beautiful girls and the biggest supermodels in the world.” She compared this with a “normal fashion show where you have four or five big girls and then the rest, great. This show, there’s nobody that’s your average joe.”

“I was a lot more nervous this year,” added Green, who joined VSB in November 2002. “Last year, I went into the show not really knowing what a huge media circus it was.”

Also backstage was star stylist Luigi Murenu for Streeters. Murenu noted that he was excited, as it was his first time working on the event. He described the look as “very sexy bedroom hair with an accent of style.” A curling iron, hair extensions and falls were used, as well as styling products from the VSB hair care line, due to launch in spring 2004.

To determine the makeup look, Green said she considered the qualities of the models, the clothing and the accessories. “I just have to create a look to enhance that —not compete with it.” When asked about the challenges of doing makeup when there is such a focus on the body, Green explained that she does whatever it takes to make sure the models are perfect from head to toe. It’s important the skin is “very sensual, touchable and sexy.” VSB’s Dream Angels Shimmer Body Lotion was used to help with that.

She described the face as “very sexy, fresh and feminine.” Naturally, she used the VSB Supermodel Runway Kit, which features 10 multipurpose products packed together in a red case. “It’s kind of cool because I don’t actually have to take the usual trolley of makeup,” said Green, who added the colors in the box “work on everyone,” including Naomi Campbell, Heidi Klum, Tyra Banks and Gisele Bündchen.

Green said there was a starting point for the look and then she tailored it to each of the girls. “I think with lingerie, if you put too much makeup on, it can get a bit X-rated. So I’m purposely keeping it on the down low — these girls are sexy enough!” To get a feminine and pretty look, she used pale, shimmery shades around the eye and “lots and lots and lots of mascara.” Mosaic Bronzer was employed to make “the skin very radiant.” On the lips, a “nudey, pinky” color called Sex Kitten was topped with clear gloss. Then there was champagne-colored shades on the eyes with a touch of sparkly gloss under the the eyebrow and eye. “You need to look good from all angles,” noted Green. “Like 360 degrees of perfection.”

Green also used VSB’s Super Model Lip Kit, which will be featured in VSB’s very first commercial. It will debut during the airing of the lingerie show on Nov. 19 on CBS. The spot will feature Tyra Banks and Gisele Bündchen having the product applied by Green. She joked that at first she was excited, then horrified.

“I’m next to Gisele and Tyra — how do you think I feel? They decided to shoot the commercial backstage during the fashion show [which is pretaped],” said Green, who said it is a busy time for her and explained that although she does have a crew of assistants, “there are 27 models and 20 dancers to work on.”