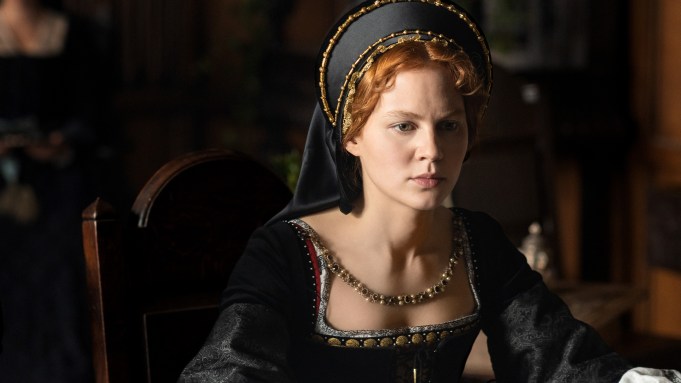 When designing the many costumes for the show, which airs new episodes on Sundays, Cariss looked to modern style elements and references, fusing them with historically accurate pieces prevalent during the Tudor period.

“We delved into paintings of the era,” Cariss said. “The Hans Holbein [Elizabeth I portrait] obviously, but also looking abroad to Giovanni Battista Moroni, who was Italian and did a fabulous painting called ‘The Tailor,’ where he’s got short, cropped hair. There’s always a beauty in some of those old paintings. Sometimes you see faces and they can be modern at the same time.”

“Becoming Elizabeth” is a dramatized retelling of Elizabeth I of England’s early days prior to assuming the throne. The series starts off with the death of King Henry VIII when Elizabeth I was roughly 13 years old, and follows the young royal as she navigates the English court as her nine-year-old half-brother, Edward VI, takes the throne.

“We wanted Elizabeth to feel like a teenager,” he said. “We wanted to give her [elements] like how young modern emo teenagers might have a long jumper with cuffs they pull down and they hide under. We wanted to try to give her that equivalent, so we worked on having that effect.”

The character also wears more subdued costumes in comparison to her stepmother, Catherine Parr. Elizabeth I sports darker-hued dresses with blackwork embroidery and accessorizes with delicate pearls. She and the rest of the women in the series are often seen wearing the French hood headdress, which was a popular accessory during the Tudor period.

Both Elizabeth I and Parr wore their most standout fashion when they appeared in English court in order to command attention, as both characters were not as respected as their peers. Elizabeth I, who is also the daughter of Anne Boleyn, was declared illegitimate following her mother’s execution, and was not given the throne following her father’s death.

Cariss’ use of modern style elements is also seen through Parr’s wardrobe. The costume designer stated he wanted to give the character a bohemian vibe to reflect her progressive nature.

Parr, the last of Henry VIII’s six wives, was the most married English queen, with four marriages under her belt. After the king’s death, Parr quickly remarried her last husband, Thomas Seymour.

“They were kind of a modern, progressive couple for the time,” Cariss said. “We very much wanted to create this bohemian attitude and I actually had a beautiful, contemporary image that was on my mood board that was the starting point. It was an image from the ‘60s or ‘70s, but it just conveyed the whole idea.”

Overall, Cariss thinks the show’s costumes help recreate the world of the Tudor period while not feeling overly costume-like for their ornamentation or lavishness.

“We knew there are so many enthusiasts of the Tudor era, so we wanted to do something that those people would enjoy,” he said. “We won’t be without our critics because they can be sticklers for absolute authenticity. Some of them are pointing out that headgear would have been worn all the time. Well, at the same time we’re making a drama and we didn’t want to weigh down the actors, so we created a whole world and we all collaborated so well to create the show we wanted to make.”

How ‘The Offer’ Reimagined the World of ‘The Godfather’ Through Costumes

How ‘The Gilded Age’ Addresses ‘Old Money’ Vs. ‘New Money’ Through Costumes