Behind the Scenes at GmbH 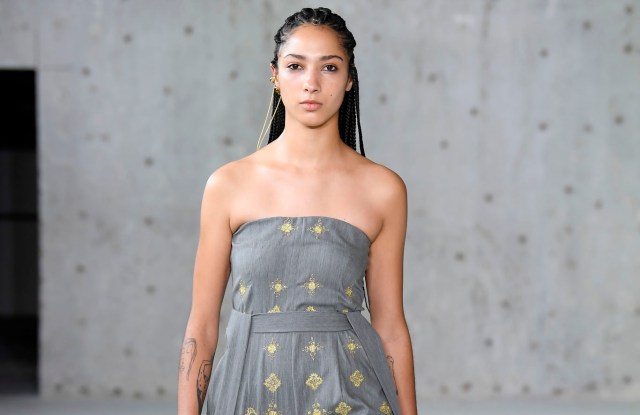 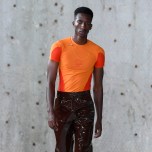 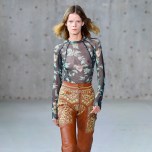 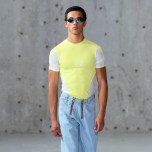 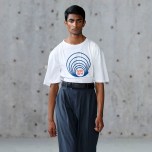 PARIS – The invitation to their last catwalk display, in mid-June here, read like a formal governmental notice in Germany. On a simple piece of paper, in black and white, it came signed and sealed, replete with a return address (in German) from “GmbH, the limited liability company.”

“We play a lot with the German bureaucratic aesthetic and language,” Benjamin Alexander Huseby, a cofounder of the buzzy Berlin-based fashion brand GmbH, told WWD.

“You are very used to [it] from very early on if you are an immigrant child in Germany,” added Serhat Isik, the label’s other cofounder. He knows, as one himself.

Isik, who is 30, is a first-generation German of Turkish descent. And 38-year-old Huseby, of Norwegian-Pakistani heritage, grew up in Norway.

From their start in May 2016, cultural mixes and a sense of otherness have informed their brand, which sent down the runway for spring 2019 an exquisitely crafted collection dubbed “Survival Strategies.” The show included GmbH’s first complete women’s wear line, with 22 looks.

Berlin shapes their approach, too. “It’s almost like a cliché, but [the city] almost has a sort of anti-fashion attitude. It is more about other things — counter-culture and music, and youth-culture and art,” said Huseby. “We approach designing…more like artists’ works.”

Often thrown into the mix is their vision of a utopian future.

All of GmbH’s principally gender-fluid collections connect together into a larger narrative, involving both men and women. However, for the first time, for spring, they included jeans, Lycra tops, jumpsuits and dresses crafted specifically for female wearers.

“I am kind of obsessed with trying to find a way to cut for both genders,” said Isik. “But sometimes, of course, you need the women’s cuts as well.”

He has always loved fashion. “I started knitting when I was 4 — already, I was knitting scarves and jackets for my stuffed animals,” added Isik. “I was always obsessed with shaping things.”

“I think it gives our clothes a very unique signature,” said Huseby. “Pattern-cutting is like handwriting. Even though we are making clothes that are seemingly mundane and kind of banal. Take the hoodie we have been doing since the first collection — it looks like a normal hoodie, but it is cut in a way that gives you a certain shape. It is cropped. So even if it is jeans and T-shirts, there is a cut involved. And I think that’s very important.”

Their friends remain top of mind. “There are so many types of bodies and shapes. There’s a tall skinny friend, a tall muscled friend, and women — small, big — and they all put on a pair of jeans, and it fits,” said Isik. “It looks different, but they can wear it.”

The duo similarly has on the runway a variety of people of various body types and ages, mostly over 20.

“I feel like there is not much history with such young people,” said Huseby. “You want them to give a story to the clothes. You also want them to feel they could be your friend.”

In the last show, one model sported a yellow T-shirt with washed jeans. “Almost like an image of me when I was maybe 15, 16,” said Isik. “These are looks that I feel personally connected to, that I wore. It has always been this dream of elevating that look, that is kind of looked-down-[on] a little bit in Germany, to a runway level.” And, ultimately, having it celebrated.

Huseby and Isik consider GmbH a fashion — not a streetwear — brand. All of the label’s production takes place in Europe, including Turkey, Italy, Latvia, Portugal and Belgium, and in small quantities.

This isn’t fast fashion. “I want them to be clothes that last…that you keep,” said Huseby. “We both are people that don’t buy a lot of clothes. But when you have something, you wear it.”

Sustainability runs deep at GmbH. The brand uses dead stock and leather that is recycled or repurposed, plus develops fabrics made from recycled fibers, for instance.

Factories working with GmbH must meet ethical standards. The brand’s garments are shipped in biodegradable polybags, while showroom hangers are rented and cardboard boxes come from local shops.

From the get-go, GmbH was labeled as a “collective” — though it is not.

“In the beginning, we started promoting ourselves with a group picture with us and some friends because we did not really want much focus on ourselves,” said Huseby. “We wanted it to be anonymous, a bit.”

GmbH, as a brand moniker, was chosen to reflect that. But being behind the scenes led to a tricky situation, since the duo personally wanted to tell a story and impart a message.

“So we realized very early on that we couldn’t really hide,” said Huseby. “People want a human, a person, rather than an anonymous kind of entity.”

GmbH’s rapid ascension, after showing its first look book filled with photos of friends, surprised the founders. “We sent it around to a few shops that we love around the world, and everyone responded very enthusiastically,” said Huseby. “Then we rented an Airbnb in Paris and brought the collection there.”

Buyers came and seven shops signed on. Adrian Joffe, of Dover Street Market, snapped up GmbH early on and was supportive.

“It exists because of that, because we did not really have any kind of savings or plan. We just wanted to do something,” said Huseby. “If we had known the challenges you can face, we might have hesitated a lot more. So I think it is kind of good that we went into it somewhat naively.”

Isik, who had been teaching fashion at the university in Berlin, was making collections on a noncommercial basis. Huseby had been a photographer and artist, who as a child sketched fashion looks and made his own clothes as a teenager.

“I was always thinking about that, imagining how my fashion show would be,” he said. “So when I met Serhat, it just kind of clicked.”

Isik was originally meant to consult with Huseby on a small collection he’d do himself, but after realizing their vision was similar, they decided to work together. Serendipity was at play, as well, in their teaming up, since Isik’s recently finished capsule collection was stolen from his showroom.

Together, they started from scratch.

As for most young designers — especially in Germany, where there is little support — it has been an uphill battle funding GmbH. Isik and Huseby thought of signing on an investor during tough times, but have chosen to remain independent for now.

Today, GmbH is in almost 40 stockists. “Very early the women’s wear buyers picked up on it, too,” said Isik. “From the second or third season, it was like maybe even 25 percent or 30 percent women’s [wear] buyers buying into the collection.”

“But it’s a mix,” said Huseby, who added no plans are in the cards for a separate women’s show, though the brand will continue being expanded for both sexes.

“It’s really hard to disconnect [men’s and women’s wear] because they are so connected,” said Isik. “If I want to make a collection, I see people in it — not just a certain gender.”

GmbH is launching an e-commerce site this fall, but own-stores aren’t currently in the cards. Ultimately, it might be a communal space, where people could engage in activities like reading, taking classes and cooking.

“A community center, more than a shop,” said Huseby. “Something that is more connected to or lives, rather than just selling clothes, would make more sense.”

It’s possible that GmbH could morph into a lifestyle label. Yet ultimately, scale and scope don’t hold the biggest significance.

“Most important for us is that we have a fashion brand that actually has a relevant voice in the world,” said Huseby. “That we’re also really part of the conversation about fashion in general, that is really taken as an influence. Our dream is that in the future, whether we last for 10 or 30 years, that we make a mark on fashion history somehow.”