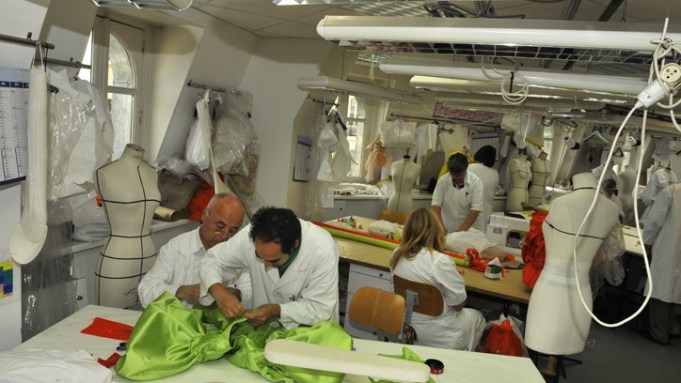 PARIS — As delivery vans lined up outside and everyone from models to firemen was directed to various floors, Monday looked like moving day at the house of Dior.

But it wasn’t. Instead, the couture show was coming home.

“The whole company is working,” declared Sidney Toledano, president and chief executive officer of Christian Dior, as he surveyed the scene: a gray runway weaving through the salons, lined with 260 gray chairs and dotted with imposing floral displays.

Logistical preparations began on Wednesday, said Catherine Riviere, director of fashion and prestige activities and the chef d’orchestre of Monday’s show. “The models will have their makeup done in the accessories bureau, [the changing room] is where we hold our management meetings and the technical space is a showroom. That’s Delphine Arnault’s office,” she said, pointing to a sealed-off door.

In the downstairs hallway, workers stapled gray carpet onto the low runway, while journalists were given a peek into the musty, two-story wooden-paneled “cabine” where models dressed in Christian Dior’s time, which has been unchanged for more than 60 years. But in the Grand Salon, all that’s been altered since the founder’s days is the lighting. “So many designers worked here,” Toledano said. “Saint Laurent, Bohan, Pierre Cardin, Ferré. If these walls could talk — they’ve heard a lot of things and they’ve seen some very beautiful dresses.”

In the top-floor ateliers, a team of seamstresses (who hadn’t slept all night) deftly put the finishing touches on clothes that would be swished downstairs — elaborately packed as usual. “We don’t have the panic of, ‘The truck’s about to leave!’ It’s one less stress,” said Madame Monique, the head of the studio.

Downstairs, set designer Michael Howells peeled away the odd faded petal from among some 4,000 roses.

“John [Galliano] had said, ‘More Dior than Dior,’ so we looked at some of the classic flowers that Dior used; roses, hydrangeas and palms,” he said. “One of the things you’ll notice is the shadows the flowers create: Shadows appear in some of John’s favorite photos of the salon. They’re as important as the flowers.”

Alexandre de Betak, who produced his first show for Dior when Galliano first presented collections in the salons 10 years ago, likewise pored over old photos. “What I did was to look at the way the audience used to look,” he said. “The audience here is as visible as the models.” That proximity allows guests to hear the clothes move and see all the fabric details. “The focus is on the design, but also on the making, which is a big part of what couture is about,” de Betak said.

With 500 guests at two shows, the audience is — surprisingly — smaller than those Mr. Dior once welcomed. “At that time, the security was not the same,” Toledano said. “Nobody’s going to sit on the stairs, though that would be fun. I would love that.”

So would Mr. Dior, whose presence was evident in words of advice on a message board to models: “Mr. Dior is watching you!” it proclaimed. “They have a sense of humor,” said model Sasha Pivovarova with a laugh when she spotted it. “We all feel the spirit of Mr. Dior.”

“It keeps us motivated,” said milliner Stephen Jones. “I just walked past photographs of Marlene Dietrich and Rita Hayworth, who were sitting here, and I’m walking up the stairs carrying my hats.”