Behind the Scenes with Kate Winslet and St. John

WWD talks fashion with the actress at the shoot for the fashion house's fall 2011 ad campaign. 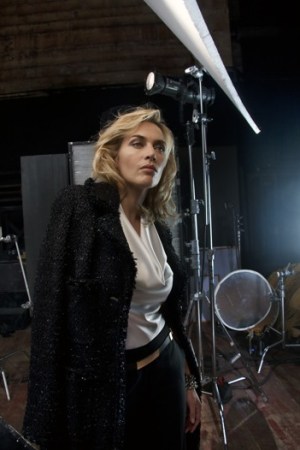 A few days before Kate Winslet attended her first Met gala, as the guest of Stella McCartney (alongside Madonna, Rihanna and Kate Hudson), she was working an 8:30 a.m. to 6 p.m. shift at an old movie theater in Jersey City.

It wasn’t as unglamorous as it sounds. A hair and makeup crew, publicists, lighting team and Craig McDean were all there to shoot the actress for St. John Knits’ fall 2011 ad campaign, for which she has signed a one-year contract. This is the first time Winslet, who’s worked with American Express and Lancôme in the past, has fronted a fashion house.

The deal transpired in the manner of a typical business transaction, wherein Winslet’s agents at Creative Artists Agency were approached by St. John, which initially floated the idea to Winslet’s stylist Jessica Diehl, also Vanity Fair’s fashion and style director, who, it turns out, was on set and chose to have Winslet dressed in a white cowl halter-neck blouse and wide-leg black pants for the last shot of the day. For her part, Winslet says she’s worn St. John before: “Absolutely, yes! I have worn several of their pieces over the years.”

Preshoot, she had been briefed on St. John’s fiercely loyal following. “I think that speaks a lot for the brand. To me, that just means a great deal,” she says. Yet not enough to know that the average St. John woman is politely described as “mature.” “I’m surprised to hear you say that, in a way,” says Winslet. “To me, it’s fresher than that. It seems fresher than that because of the fabrics. They’re extremely delicate, extremely wearable and very flattering.”