Amid continuing political and economic turmoil, Lebanese designers and retailers are struggling to keep their businesses going. 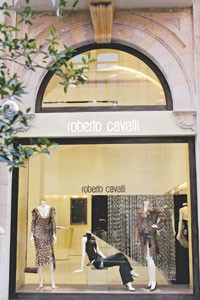 BEIRUT, Lebanon — Amid continuing political and economic turmoil, Lebanese designers and retailers are struggling to keep their businesses going.

Over the last few months, as tourists and locals fled the country and morale fell, retailers planned long-term alternatives in case the situation grew worse. For most of them, the losses have been staggering.

“This year we lost almost $20 million,” said luxury retailer Tony Salamé, who owns a dozen stores in Beirut, including the newly opened Dolce & Gabbana and Roberto Cavalli stores. “Because the airport was closed for so long, we also lost fall merchandise that we received in October instead of July.”

But Salamé is not giving up. He plans to open a Marc Jacobs and Marc by Marc Jacobs store by the end of the month.

Soha Farah, co-owner of three IF boutiques in Beirut, which carry such labels as Yohji Yamamoto, Martin Margiela and Comme des Garçons, lost 30 percent of her income this year. She said the political tensions discouraged Gulf clients, whom she usually counts on, from shopping in Beirut.

Because of their buying power, Gulf clients are especially important for high-end stores and for couturiers, whose dresses attract royalty and socialites from all over the Arab world. Before the war, Beirut was considered the luxury platform of the Middle East. Traditionally, lavish and formal events have driven sales of high-end fashion, but since the war Gulf clients have been shopping in Europe or in the booming Dubai, and the Lebanese social calendar has been less crowded than usual.

“My Gulf customers, who usually order winter dresses in the summer, didn’t come this year,” said Rabih Kayrouz, an up-and-coming couturier who designs mainly for weddings and galas.

“The other problem,” said Kayrouz, “is that Lebanese customers didn’t buy much. There were no galas or major cocktail parties — apart from weddings, the winter orders were almost nil.”

Zuhair Murad, another couturier who’s gaining popularity internationally, said that since the war his Lebanese clients naturally haven’t been in the mood to dress up or go for cocktails.

Salamé agrees. “People don’t feel like buying,” he said, “and because of the political situation, they’d rather keep any savings aside. The problem here is that politics have too much influence on the economy.”

Last November, as thousands of protesters from the opposition camped outside parliament and demanded the resignation of Prime Minister Fouad Siniora, access to most of the recently rebuilt shopping area downtown (where Salamé’s main stores and office are located) was blocked, isolating it from potential shoppers. Protestors have been marching in the neighborhood since then in the Hezbollah-led campaign to topple the government.

(On Wednesday, hundreds of protestors stood outside the Economy Ministry as part of the campaign, with police and soldiers blocking off the commercial Hamra street, according to press reports. Over the past eight days, four similar protests called by the main labor union confederation have taken place at government buildings.)

Following the November protests, Salamé, along with other retailers, launched a media and public relations campaign to encourage Lebanese residents and tourists to shop. The retailers also pressured political parties to stop their confrontations during the holiday period — successfully, as it turned out.

Retailers said their sales were good during the truce in September and October and again during the holiday period.

“In September,” said Nadim Chammas, general director of Elie Saab, “we had a lot of tourists from the Gulf, and for the holiday period many of our expatriate Lebanese clients came back.”

Chammas said his company didn’t suffer major losses. While the new Elie Saab store was closed for two months during the war, he was able to recoup sales from other markets.

“Whenever Lebanese people are relaxed, they feel like buying again,” said Farah. “During the holidays people got excited to get out and buy again and feel the Christmas spirit.”

But in an unstable country, still recovering from a civil war, and severely damaged by last summer’s conflict, the legendary optimism and resilience of the Lebanese have begun to fade.

“When danger is lurking everywhere and there is no more place for creativity, it’s hard to do anything,” admitted Désirée Sadek, editor of Elle Orient.

Sadek, who just published the fourth issue of the magazine, said the current atmosphere in Beirut is not inspirational, although she believes the city remains the capital of a free press and fashion in the Middle East.

“It’s not easy to have an artistic job in an atmosphere like this,” said the couturier Kayrouz, who expressed exhaustion from all the months of angst and instability. “I cannot take these risks anymore,” he said. “The situation is not reliable.”

Kayrouz, like most others in the industry, plans to develop his international sales to reduce his dependence on the Lebanese economy. “I’m staying in Beirut, but I’m thinking about making a semicouture line that can sell internationally, and also setting up another workshop in Dubai or Kuwait.”

The designer Murad said that if there was another war he might be forced to move his offices to Paris. Sadek, too, is considering moving Elle Orient to another Arab country.

Salamé won’t be moving, but said business in Beirut is too risky. “If it goes on like this next year we’ll have to cut down expenses and stop recruiting staff.” The retailer has already reduced his buying budget and ordered fewer cocktail dresses and less eveningwear for spring.

Eventually, Salamé said, if the crisis worsens, he will have to close a few stores in Beirut and lay off staff.

Salamé, like most in the industry, is also developing the Dubai market, where he has two stores and is planning to open an art gallery. “We started working in Dubai because the situation here has been difficult in the last two years,” the retailer said.

IF’s Dubai store, which was opened during the war, is providing a stable income for the company and a buffer in case the insecurity persists. “Dubai is the most international place in the Middle East right now,” Farah said.

But most in the industry refuse to think Dubai might replace Beirut as the fashion and leisure capital of the region.

“If you think about fashion in the Middle East, you think about Lebanon,” said Murad. According to the couturier, if the situation lasts, the sophisticated Gulf clients who usually come to Beirut will go shopping in Europe rather than in Dubai.

“Lebanon is the Saint-Tropez of the Middle East,” said Salamé. “It’s more sophisticated than Dubai and has a warm, human side that tourists love.”

“You don’t become the center of the world just because you have money,” said Sadek. “Nothing will replace Beirut.”