A look from Belstaff's fall 2021 collection.

LONDON — Belstaff’s new chief executive officer Fran Millar is spinning her experience in the professional sports business and making some quiet, but significant, changes to the brand’s offer.

Millar, who took up the role last year, spent more than a decade at Team Ineos (previously known as Team Sky) as head of business operations for the international cycling franchise.

Ineos is the global chemical company owned by Jim Ratcliffe, who purchased Belstaff in 2017. Ratcliffe, one of Britain’s richest individuals, owns and sponsors teams across various sports including soccer and Formula One.

Millar is tightening Belstaff’s offer, putting an accent on outerwear, technical performance and women’s wear with a sporty twist alongside the creative director Sean Lehnhardt-Moore.

Millar believes that Belstaff doesn’t have to play in every single product category, or compete head-to-head with fashion brands, and that it should focus on what it does best, chic and sporty clothing.

She’s been tapping her old friends at Rapha, and the cycling enthusiast Sir Paul Smith, for advice as she wheels into the sporty clothing arena. 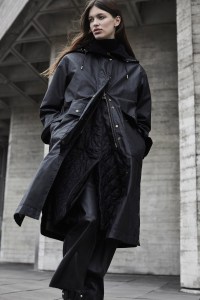 Belstaff has had many iterations over the years as a luxury and a fashion brand with a host of celebrity collaborations, but it never quite fit properly into either world.

Now it has an opportunity to compete in the hot category of designer outerwear, battling with brands such as Moncler and its new subsidiary Stone Island, Canada Goose and Moose Knuckles for market share.

Going forward, Belstaff will be paying closer attention to its motorbike heritage and to its heroes, including the Trialmaster motorcycle jacket.

For fall, the company’s direction is clear. During a walk-through of the collections at the company’s Regent Street store, Millar said changes will be gradual and she doesn’t want to scare anyone — or do anything revolutionary. She said a bigger shift will be evident for fall 2022.

For fall 2021, Belstaff is partnering with Gore-Tex on a range of polished, precision-engineered outerwear including slick, lightweight jackets in olive and navy blue. It’s not the first time the two brands have worked together. Gore-Tex and Belstaff created a collection for the British mountaineer and explorer Sir Chris Bennington in the ’70s before launching a commercial range of waterproof outerwear.

Belstaff said Gore-Tex’s eco-credentials dovetail with its own: Gore-Tex is set to become carbon neutral by 2050, among its other goals, while Belstaff launched sustainable denim earlier this year, and has also put a focus on upcycling, repairing customers’ garments and reducing water usage in manufacturing and finishing.

For fall, the company is also debuting a line of shearling outerwear and puffers made from ethically sourced down, as well as knitwear made at The Albion Knitting Co. in north London.

The feeling is chic, classic and cozy rather than fashion-forward. Millar said there’s more work to be done in women’s wear, too. She said she wants that collection to have its own identity, made for “an independent, strong female,” as opposed to an add-on category for the wives and families of the male Belstaff customer.