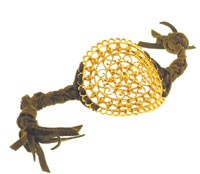 NEW YORK — Belts were the buzz as retailers prowled Accessorie Circuit at the Show Piers, AccessoriesTheShow at the Jacob K. Javits Convention Center here and showrooms around town this month for the latest spring and pre-fall must-have accessories.

“Belts were the biggest growth category in accessories [in our stores] in 2005,” said Stacey Pecor, owner of Olive and Bette’s, which has four locations here and an e-commerce business.

Pecor bought belts from at least five vendors, including Streets Ahead and Hadley Pollet.

“We’re selling so much denim that it is an easy add-on sale,” Pecor said.

“I need my accessories to pop,” said Cohen, who also purchased handbags in neutral colors of caramel, brown and ivory. “I didn’t see a lot of newness in accessories. I was very careful about my buy.”

Lace made a statement on handbags. Lauren Merkin showed a clutch with a cotton lace overlay, while Laundry by Shelli Segal offered lace satchels with oversized leather paillettes at the Liz Claiborne showroom.

“Lace was very popular for us this season,” said Lynn Roberts, vice president of Echo Design Group, which had lace triangle wraps and scarves, among other accessories. “It works because it’s pretty and feminine.”

Liberty prints are also important for the spring season. Floral-printed fabric was woven through chain necklaces at Alexis Bittar and wrapping bangles at Dame Design, while Look From London showed floral-print footless tights.

Pamela Thomas of Phoenix Rising, a shoe store in West Lebanon, N.H., bought an array of footless tights in bright colors and prints.

“Things are so subdued [in other categories], that I find myself attracted to the brights,” she said.

With retailers scrambling to fill their stores for the post-holiday season, many vendors questioned the timing of January market, as it has become customary for early fall goods to begin shipping in June and July.

“This is not as important a market for me,” said Cynthia O’Connor, owner of the eponymous showroom that exhibited at Accessorie Circuit. “Things are moving so much earlier. Eighty percent of the business is done in the showroom.”

Dale Lindholm, president of Pure Accessories, a showroom that also exhibited, said: “We’ve seen some of the bigger stores, but this market is really driven by boutique business. The date is a little strange. I wouldn’t mind if it were in November and then we skipped January.”

“It’s been a good show,” he said. “There are less tire kickers and more people who are coming in to order. However, I wouldn’t mind if the show were pushed up to November. It seems late to roll out spring in January.”

Fragments chief executive officer Janet Goldman said business was consistent with last year, but she noticed that traffic at the show was lighter and that some buyers seemed resistant to higher-priced items.

“If it was the right thing, however, they bought it,” said Goldman, adding that her business with Dana Kellin and Accessories & Beyond, which featured leather wrap bracelets interspersed with charms, was strong.

As for the timing of the show, Britton Jones, president and ceo of Business Journals, which produces AccessoriesTheShow, said January market generates almost as much revenue as August market, where holiday merchandise is shown.

“Years ago, everyone referred to the January market as the markdown-money market,” Jones said. “That’s changed tremendously. It’s neck-and-neck with August for the strongest market of the year.”

AccessoriesTheShow increased in size since last January by 31.8 percent to 80,000 square feet. Accessorie Circuit had 465 exhibitors and an attendance of 9,700, combined with its sister show, Intermezzo, also at the Piers.

Henri Bendel president and ceo Ed Bucciarelli said the early delivery phenomenon is in response to what consumers want.

“Our customer looks to us for newness every time she visits the store, so every market is significant for us as we search out the new and the next on an almost constant basis throughout the year,” he said. “January market is important because we are able to place immediate orders for spring, as well as identify key trends and resources going forward into fall. It’s also the first structured opportunity to see fresh merchandise after the holiday season. The Bendel girl has told us that she just can’t get enough accessories, and we see her interest only continuing to grow as we introduce new product and new resources.”