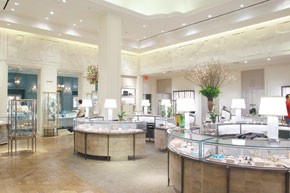 “There are two fashion categories that women have always been obsessed with: jewelry and shoes,” said Gold, noting Bergdorf’s customers view jewelry as an investment — especially with prices for metal, diamonds and other gemstones soaring. “Because there’s a tangible, intrinsic value [to fine jewelry], it’s easy to justify it as an investment. It’s not perceived as something that will depreciate in value.”

The space has been expanded to 1,600 square feet after the store filled in a hole that allowed customers to peer onto the beauty department in the basement level. Designer jewelry is located at the nexus of the store, sandwiched between an elevator bank and escalators on either side. Designed by Bergdorf’s in-house team, the look is modern and airy with a luxurious bent. The custom-made curved jewelry cases are made of shagreen and brushed chrome, while the display fixtures inside the cases are made from hand-sculpted metal and gray linen.

When Bergdorf’s moved cosmetics to the basement level nine years ago, it designed the hole as a reminder to customers where they could find beauty products. The gape, however, proved to be a challenge for merchandising and traffic flow. The added floor space allowed for additional showcases — so much so that the store added six new designers to the mix, including Carol Kaufman, Tom Binns, Ofira, Suzanne Felsen, Abraham DuPont and Rodarte.

Gold said there is crossover between the precious jewelry customer and the designer jewelry one, so he was thoughtful to create an easy flow. Bergdorf also has plans to renovate its modern accessories room on the main floor along the 57th Street side of the store.

“People come to us for extraordinary products in all categories,” said Gold, adding jewelry and designer and contemporary apparel are the top-selling categories at Bergdorf’s. “It’s our goal to make this store the ultimate destination for jewelry.”