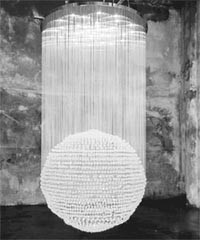 NEW YORK — The normally staid Bergdorf Goodman was hopping Thursday night, as it feted its holiday windows, a new book from visual merchandising vice president Linda Fargo and its collaboration with Swarovski, which includes crystal chandeliers made by artists and designers now hanging on the main floor.

“Bergdorf Goodman is the new club in town,” quipped 7th on Sixth director Fern Mallis, as she was jostled by the huge crowd at the Fifth Avenue store.

Also among those checking out the windows and crystal creations was socialite CeCe Cord, who said she sees a return to more elaborate festivities this holiday season.

“People are ready to celebrate again,” she noted. “They are going all out this year.”