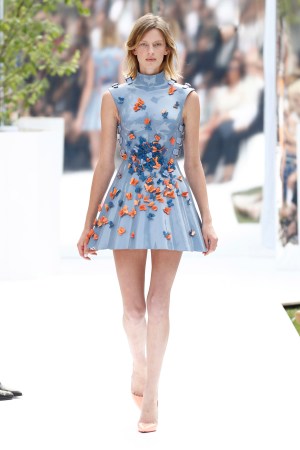 Berlin’s Marina Hoermanseder is spreading her wings,  both as a designer and a businesswoman. For spring, she transformed her signature bondage elements — strapped and wrapped leather belts and buckles — into breezy embroidery and custom-cut lace in ice cream pastels, rendering them instantly more wearable, want-able and salable.

The lineup’s playful lightness took its cues from the French Riviera. Pink and orange pearls bobbled from a long mesh skirt and open-back top in more formal looks, while sporty-chic tennis dresses and pastel polo shirts had a retro flair. After introducing intricate leather flowers on leather molded bodices and skirts last spring, the designer now added some fauna: butterflies.

Tangerine jackets and coats felt a bit mumsy, but perhaps that’s part of the strategy, showing that Hoermanseder can not only dress party girls, but also their mothers — the ones probably holding the credit cards. (An upcoming collaboration — Marina Hoermanseder x Hello Kitty, which will be sold largely on Zalando in September  suggests she also has the little sisters in her sights.) At the same time, the designer’s showpieces, this time encrusted with Swarovski crystals, and odd inspirations — crystal skin or butterfly children, kids with a rare skin disease — were more extreme than ever.