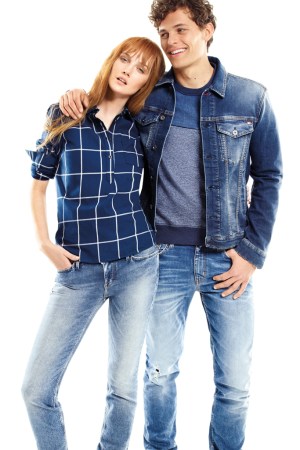 A climate of change appears to be developing in Europe’s largest, strongest, but also most stubbornly set fashion market: Germany.

When Berlin Fashion Week takes off July 7 to 10, the city will be hosting more than a dozen trade fairs and platforms, plus about 50 Mercedes-Benz Fashion Week Berlin runway shows and presentations. Representing almost every conceivable orientation and apparel category — mainstream to niche designers, streetwear to alpine folkloric, high-tech to green, large sizes to kids — Berlin’s ever-expanding offerings have sometimes been criticized as a disconnect in a retail environment where safety and sameness reigns.

Despite a healthy overall consumer climate, German apparel retail sales continue to lag. Average sales for 2015 to date are down 2 to 3 percent compared with the same period last year, “and things weren’t so great then, either,” noted Jürgen Dax, director of the German Apparel Retailers Association. “Many customers simply aren’t coming into the stores. Everything is always available via the Internet, and other leisure activities seem to be more attractive [than shopping].”

Yet Dax noted German retailers are shifting from the defensive to the offensive to consider what they can do to make their stores more interesting, noteworthy and appealing. He predicted buyers in Berlin will not only be visiting their tried-and-true brands, but will spend more time looking for “new, different, more attractive lines, guided not only by price, but quality and new input. I think it’s going to be a very work-intensive fair season.”

With few exceptions, the Berlin fairs are booked, and organizers have been working on new concepts and features to inspire the retail community, as have exhibitors. Though it’s needed several seasons to take root, Premium’s edgy designer-oriented Dissonance area was an unexpected highlight in January, especially with international buyers, according to Premium chief executive officer Anita Tillmann. She noted Hall 8 for pre-collections and young designers is being further expanded. “It just takes time,” she said, “but what’s surprised us is that Berlin designers are indeed in the sights of fashion-forward people.”

To help hike Germany’s emerging designer ante, MBFWB has moved the stage venue from the tent at Brandenburg Gate to the more individualized quarters in The Collectors Room museum-gallery space on trendy Auguststrasse in Mitte.

Now in its second season, the Berliner Mode Salon at the Kronprinzenpalais is also striving to enhance the image and acceptance of “Design Made in Germany” with an extended group presentation of 25 leading German women’s and accessories designers on July 10. In another new move, Berlin luxury department store KaDeWe is further supporting the endeavor with a six-week pop-up shop opening July 8 in the atrium featuring selections from all the designers’ fall collections, as well as devoting the store’s windows to this “little mock-up Kronprinzenpalais.”

For a personal touch of Francophile flair, Show & Order is introducing SO, a selection of fashion, jewelry and lifestyle pieces from Paris curated by trade-show consultant Sophie Guyot. The more mainstream and volume-oriented Panorama fair is adding the Nova area, stocked with wellness products, home accessories and gifts with which to accent point of sale, as well as spotlighting other in-store innovations to help retailers tell a story.

Brands like Marc Cain are taking it upon themselves to show the way to advance presentation and assortment. “Fairs are a great place to launch something,” said Norbert Lock, managing director, and this season, the coordinates specialist will install a tent at Panorama housing a 4-D virtual runway, which can be tailored to the space needs of large or small retailers. The brand also shows on the MBFWB runway.

In terms of merchandising, Cain and women’s fashion label Laurèl decided to make changes to clustered delivery schedules, taking the initiative in their own stores to inspire through example. Cain’s additional separates program not only broke the boredom of racks of coordinated looks, but generated stronger business in the often weaker months of April and May, Lock reported. Wholesale clients are more receptive to the add-ons.

Splitting theme deliveries in two to increase the supply of fresh merchandise, Laurèl’s aim was to act against early markdowns, a common reaction to falling in-store traffic. Showing on the runway as well as at Panorama, ceo Dirk Reichert said the brand has won many new customers in Berlin and is hoping to reach more international buyers. “A lot is being done to get more international buyers here.”

Germany’s growing contemporary market is another fresh focus in Berlin, with now-larger-scale manufacturers like Set introducing a subtle, more sophisticated taste level. While management board member Alon Junger suggested contemporary can represent 10 percent of the German women’s fashion market, as opposed to, say, 25 percent in France, he’s bullish about the brand’s growth potential at home and internationally. The brand is eyeing growth of 20 to 25 percent this year. Picked up by Saks Fifth Avenue and Harrod’s, Junger said while much is expected of a German brand in terms of production and delivery, “they don’t expect German brands to be interesting. Harrods, for example, said [we] don’t look German at all.”

Berlin’s men’s wear offerings have been steadily growing, on the runway and increasingly at fairs like Premium, Seek, Ethical Fashion and Greenshowroom. Wolfgang Schmidt-Ulm, head buyer for local men’s wear retailer Outfittery, will be hunting the shows for inspiration and innovation. Outfittery’s sales and research show the German men’s market to be diverse and open to less conservative options, and said he’s prepared to take on convincing newcomers. “German men have a very high awareness for fashion, lifestyle and service,” Schmidt-Ulm pointed out. “And it’s all trending upward. Bring it on — there’s momentum here.”

Berlin’s traditional source of momentum and energy — the streetwear and denim segment — is also alive and well. The recent sale of Bread & Butter to multinational online retailer Zalando has the market guessing about business-to-consumer developments in 2016, but even in July, Bread & Butter will be exploring new territory with Startup, an area housing about 30 young fashion, food, gadget, interior and other assorted companies.

Selvedge Run is joining the sector’s fair lineup, focusing on men’s heritage and craft-oriented brands, while denim, street and urbanwear are the calling cards at Seek and Bright, with yet more on offer at Berlin’s remaining fair venues. In general, according to Mustang’s chief product officer, Hans-Bernd Cartsburg, “The market is developing positively because stores are more open for new products and brand, which boosts new fits and fabrics. For us, it’s all about new silhouettes and more elastic fabrics this season.”

Berlin, he added, is still a place to go for denim and streetwear: “Despite the smaller Bread & Butter, the trade-show scene was able to establish a diverse range and the current development in European retail has brought about a platform that is focused on information and exchange.”