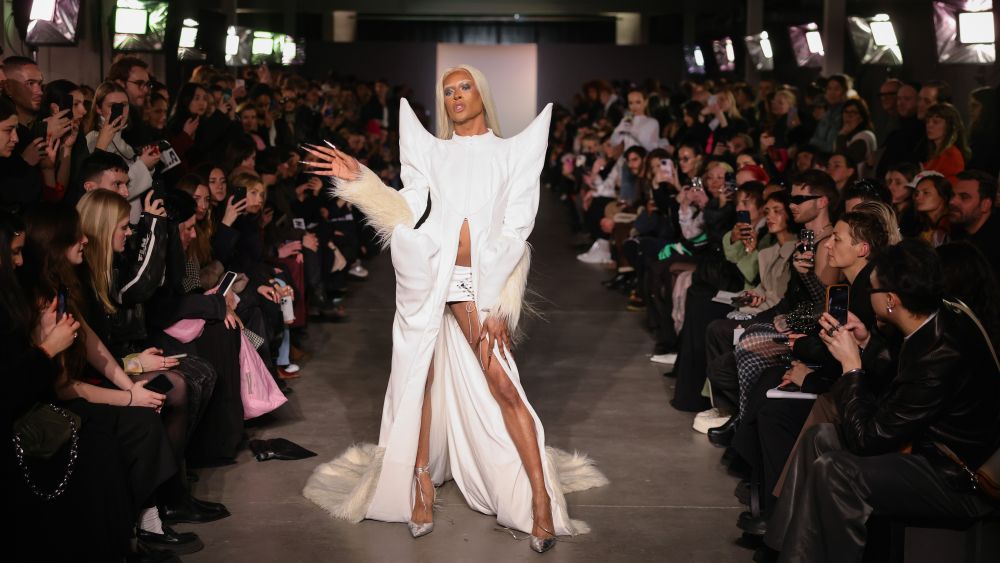 BERLIN — Berlin Fashion Week kicked off last week in an unexpected headline-making way. But the fact that the event got more international press than it ever had before had little to do with the brands on show.

On Jan. 16, New York-based activist art-pranksters The Yes Men issued a fake press release and put on a fashion show targeting German sportswear giant Adidas. The activist group called on Adidas to sign a legally binding agreement to fairly pay its workers in factories in countries like Cambodia.

That was not the last of political protests at Berlin Fashion Week either.

Two days later, two protesters from the environmentalist group Last Generation confused spectators at a show by German brand Anja Gockel being held in the five-star Hotel Adlon Kempinski. Before they unfurled a sign that said “last generation before the tipping point,” some of the onlookers thought the two young women were part of the show.

The protesters were escorted out but Gockel herself, who prides herself on her sustainable practice, was unfazed, telling German news agency dpa: “Why not? They can use my stage for a good purpose.”

And the final event of Berlin Fashion Week saw a return to Platte, the rebellious and experimental central city space which had helped host the spoof Adidas upcycling show on Jan. 16. Offerings from five designers were shown at the “Diverse It” reception because, as the organizers put it, “diversity, like sustainability, is not a temporary phenomenon but an expression of the current zeitgeist and global social change.”

The last two political statements only made the local papers. But there was still plenty going on at Berlin Fashion Week worthy of attention.

That included a lot more, albeit less overt, cultural and political messaging, all of which reinforced the idea that Berlin’s younger and more adventurous brands, surrounded and influenced by the city’s legendary art and club cultures, have their fluorescent fingernails right on the global zeitgeist’s frantic pulse.

Labels like LML, by Lucas Meyer-Leclère, a former head of textile accessories for Jimmy Choo, further developed a creative signature and also showed commercial sensibility. As he has done before, the designer recycled arty looks — he calls it “re-tailoring” — from past collections but added new handcrafted leather and woven textiles, too, as well as more consumer-friendly, well-cut jackets and pants.

Equally interesting was the choice of location. LML showed in a central city church, St. Marien, in which Meyer-Leclère was baptized in 2017 and where he has discovered acceptance, “regardless of sexuality, gender or religion,” he wrote.

Models walking in the LML runway show reflected this diversity and, along with notes on the collection, audience members received a copy of the pamphlet “Homosexuality and the church — what you always wanted to know.”

Elsewhere, the rave-savvy brand Namilia, founded in 2015 by Nan Li and Emilia Pfohl and worn by the likes of Rihanna, Billie Eilish, Kylie Jenner and Cardi B, made their first appearance at the Berlin event. Known for their provocative manifestoes, often related to sex positivity and female empowerment, Namilia has already shown several times in New York. The fact that the Berlin-based business was convinced to climb onto the runway here, with their array of fantastical, gender-fluid leather gear, was seen as a victory for the event’s organizers. The Namilia outfits are also available for gamers to wear in the digital game “Need for Speed.”

Other labels showing in Berlin made unique statements on sustainability. Stylists’ favorite SF1OG offered subtle inspiration drawn from local memorabilia, eternal magpie Lou de Betoly toyed beautifully with crochet and trinkets, and Esther Perbandt, possibly still best known as a former finalist on reality show “Making the Cut,” showed more than a dozen couture-like pieces in the foyer of Berlin’s Art Library. Each had chips integrated into them detailing their sourcing.

In general, attendees reported an upbeat mood and praised the growing professionalism at Berlin Fashion Week. This included a wide variety of ways of presenting a collection and a plethora of interesting locations (plus the attendant grumbling about having to crisscross the city to get to them), from industrial halls to the cellar of the city’s town hall.

Creativity that reflected the city’s inimitable openness, politics, protests, plenty of funding and even a healthy dose of commercialism via more mainstream brands like Odeeh, Danny Reinke, William Fan and Rianna + Nina: This edition of Berlin Fashion Week appeared to give those who want to see the city’s boutique event evolve plenty of cause for optimism.

But what about the business?

The Berlin Senate’s generous sponsorship allowed for hospitality for a handful of international media and buyers. But as for many peripheral fashion weeks — that is, those that are not Paris, Milan, London or New York — the question in Berlin must also be how to remain financially viable and keep internationals coming back. It’s all very well to show in Berlin once or twice, but many of the city’s most successful sartorial offspring have ended up seeking fame and fortune further afield.

One answer might be a more symbiotic relationship between the runway events and the commercial trade shows that take place alongside Berlin Fashion Week. These returned in January — a 20th anniversary edition — to accompany the event for the first time since the COVID-19 pandemic upended their schedule.

Around 10 minutes’ drive from the main runway venue in western Berlin, an estimated 500 brands at the two fairs — Premium for high-end labels and Seek for streetwear — set up booths inside the city’s huge Messe venue. Alongside next season’s apparel there were colorful cafés, bars, spaces for meditation, DJs and live musical performances.

The mood was buoyant at the streetwear-focused Seek, although, at Premium, exhibitors told WWD they felt a little uncertain. More than three-quarters of buyers there were German, they all agreed, with the international visitors mostly from France, Belgium, the Netherlands, Italy and Canada.

“The pandemic really messed things up,” said one small brand owner, who didn’t want her complaint on the record. “Premium was always important but there’s a question mark hanging over it these days: We were asking ourselves, should we go or not?”

“We’ve had a lot of people come through but not at the frequency we might have liked,” the marketing director for a major franchise menswear brand told WWD. “Everybody has just been to Pitti Uomo and they tend not to do both.”

“It feels like a lot of people are not here. I’ve had one big customer come through, which was great, but no new contracts,” said designer Christiane Strobel, who focuses on sustainable garments and who was considering relocating to a new sustainability-focused event called Beyond Fashion, that was taking place in the city at the same time.

Smaller brands may have struggled to make an impact but larger labels professed themselves satisfied. “It’s been great,” said Peter Frericks, head of global sales for Dutch brand Scotch & Soda. “We’ve had existing customers, we’ve had some new customers, we’ve had department stores and some internationals too,” he said.

“It’s a nice vibe but there could be a bit more going on,” said Aaron Rath, sales manager for Wrangler and Lee in the German-speaking markets. “We’re not unhappy though.”

What was missing was much of a connection to the more radical Berlin fashion a small taxi fare away, seemingly despite the best efforts from both events’ organizers.

“I’m aware of Berlin Fashion Week but it’s not really of much interest to me,” Scotch & Soda’s Frericks explained. “I’m focused on being here.”

“Berlin Fashion Week? Where is that on?” one sales representative from a major denim brand asked.

“I don’t think there’s enough information about it,” Italian accessories designer Silvia Fornie told WWD; she was visiting the trade fair trying to decide if it might be a good fit to show herself in the future.

“There’s a lot going on and it’s quite hard to understand where you want to go,” added her companion, Anabella Georgi, a Venezuelan product designer based in Berlin.

But the designer of Et Al, a young Berlin-based label that was showing at Premium for the first time, said he had received plenty of information on the actual runway shows using the trade fair-supplied app on his phone.

“I do think it would be nice if the two events were closer together, ” the designer, Jason Dunn, told WWD. “There’s so much talent here in Berlin, I feel like it’s almost being squandered.”