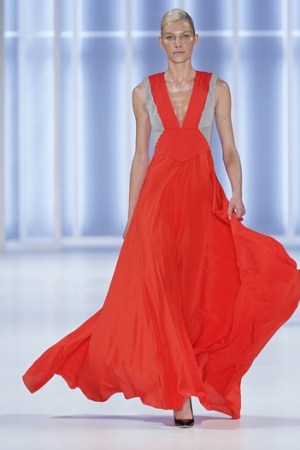 Allude: The German cashmere specialist Allude aimed to go lighter than light for next season, and did just that.

Augustin Teboul: The French-German design team showed all-black looks at their presentation “Dreams are My Reality” off-site in a cavernous, decaying former stable.

C’est Tout: The collection took us back to the Seventies with chocolate brown suede bell bottoms, psychedelic printed silks and tighter than tight denim hotpants.

Diesel: For spring, Heikki Salonen rethought the Diesel woman and what’s essential in her closet.

Dimitri: The designer paid tribute to his heritage this season with floor length Grecian chiffon gowns and cage-like corsets that gave a nod to the gladiatorial theme.

Don’t Shoot The Messengers: Looks ranged from the demure to the unabashedly sexy, in mostly black.

Escada Sport: With a water-filled runway in a former public swimming pool, it seems Escada Sport was out to make a splash.

Firma Berlin: Known for its stark tailoring, this brand showed its relaxed side, presenting its largest collection in the garden of famed nightclub Berghain.

Frida Weyer: Everything started out just peachy. Pale orange and rusty tones kicked off a collection of dresses and gowns.

Hien Le: The collection is built having just the right pair of pants, shorts, shirt, jacket or coat (and for women, dresses) – all unobtrusive and coolly proportioned.

Hugo: With the parent company’s shares ranked by analysts at “outperform” of late, brand and women’s creative director Eyan Allen gave himself the same directive when preparing the spring/summer collection.

Irene Luft: Eye-popping color blocks and metallic silks dominated this collection, but the designer also showed her darker side with a range of Gothic black lace dresses.

Marcel Ostertag: The Munich-based designer continues to experiment with color and hybrids, such as a chiffon dress/trench coat.

Michalsky: Michael Michalsky celebrated his 10th season with a collection that was consistent, yet still plenty quirky.

Mongrels in Common: In a season strong on shirt dressing, the brand took its specialty several steps further.

Patrick Mohr: Berlin’s provocateur — who in the past has used homeless youths to parade avant-garde streetwear — seemed subdued this time around.

Perret Schaad: This young Berlin duo has a reputation for refreshing simplicity. This season, however, their low-key styles, especially in more structured linen and silk, often looked more puritanical than pure.

Raphael Hauber: Geometric prints made from images of the landscape taken from space adorned the designer’s second solo collection.

Rena Lange: The designer has cornered the market on trimmings this season, a bevy of ribbons, braiding, lace, and little shiny black floral paillettes.

Schumacher: For spring, the designer pumped up neutrals with neon highlights on shoulders, necklines and bag handles.

Strenesse Blue: This label is back on the Berlin runway and back on track with an appealing lineup of contemporary styles for work or play.

Tokyo Gakudan: After the cancellation of Tokyo Fashion Week a group of Japanese designers reached out to find a place to show their creations.

Vladimir Karaleev: The designer continued his cut-and-go tactics in his Berlin presentation, a mostly still life of calculated disarray.

Wood Wood: The Copenhagen-based label was in a California state of mind for its debut in Berlin.