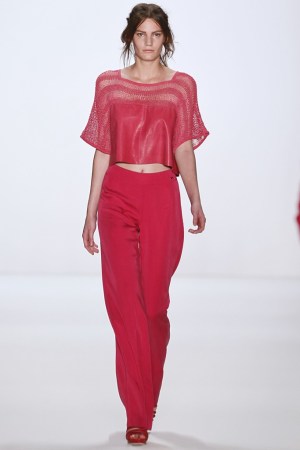 Barre Noire: A flurry of fourth of July confetti covered the brand’s studio presentation, which featured a nod to Eighties Americana.

Escada Sport: The brand opened Mercedes-Benz Fashion Week Berlin with a sunny cocktail of a collection worked in strawberry margarita reds and a dash of dark indigo blue.

Esther Perbandt: The designer paid homage to Berlin with an image of the Brandenburg gate that illuminated the entrance to the runway.

Frida Weyer: After a season’s break, the designer came back to the runway enriched by an experience in Turkey.

Hannes Kettritz: In a cheeky move, the designer sent out a well-mannered black rain coat whose clear plastic back exposed a model wearing nothing more than his tattoo.

Irina Schrotter: The Romanian designer bucked the trend for neons by showing a range of slinky, ethereal dresses in the palest of peach, dusky pinks and white.

Issever Bahri: The crocheted leather was inspired “by the wicker chairs in our respective family houses in Turkey,” said designer Derya Issever.

Laurèl: Designer Elisabeth Schwaiger show was inspired this season by what Sophia Loren would have packed for a trip to Portofino.

MalaikaRaiss: The designer took a ride up the California coast, showing some strong shouldered and easy to wear pieces such as an oversized shirt dress in blue silk.

Michael Sontag: The designer is a young virtuoso of complicated simplicity — or simple complexity.

Michalsky: The designer hit his commercial stride for next spring, and not only in men’s sportswear, where he’s long been on more solid ground.

Perret Schaad: Young designer duo Johanna Perret and Tutia Schaad continued to tailor their vision of fluid geometrics, this season thinking ever more outside their box.

Rebekka Ruétz: The designer hails from Austria, but she continues to draw inspiration from her time spent living in New Delhi.

Sissi Goetze: The designer’s wardrobe staples for men had an individual polish and a touch of juvenile whimsy.

Vladimir Karaleev: The designer propagated his own breed of hybrid blooms by photographing multi-hued bouquets and then blowing up the images for prints.