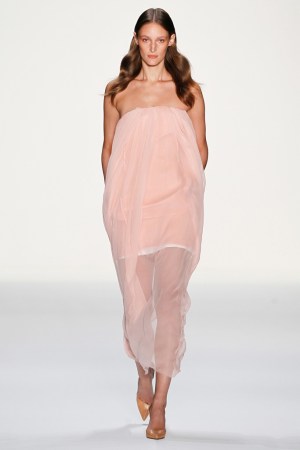 Achtland: Achtland’s Oliver Lühr and Thomas Benz found a suitable location for their first runway show: The Kronprinzenpalais, a palace with a seedy East German touch.

Dawid Tomaszewski: This season, the designer toned down the glitz with appealing results.

Dietrich Emter: The designer showed a range of finely constructed feminine shapes that were ladylike without being prim.

Holy Ghost: The color-drenched Indian festival Holi served as the spring inspiration for this Munich-based label.

Issever Bahri: Derya Issever and Cimen Bachri, who draw from their Turkish roots each season, showed spring to a remix of the “Star Trek” theme tune.

Kilian Kerner: Kerner presented looks ranging from sleek to sporty to glitzy, all of which were worn with color-coordinated running shoes made in conjunction with Nike.

Marc Stone: Swiss men’s wear designer Marco Steiner took fossils as the inspiration for a collection that was packed with earthy tones.

Michael Sontag: For spring, the designer added an element of dazzle, embellishing his draped shapes with Swarovski crystals.

Schumacher: The designer is having a blast for spring. Primary colors and Pop Art references made for a fun yet refined array of looks.

Sissi Goetze: The men’s wear designer pumped up the Biggie Smalls soundtrack and sent out a collection with a 1990s hip-hop feel.

Sopopular: At his presentation, men’s wear designer Daniel Blechman said that spring “was inspired both by grunge and also architecture.

Umasan: Anja and Sandra Umann, the twin sisters behind the vegan fashion label, showed a mostly black and white lineup for men and women.

Vladimir Karaleev: The designer’s deliberately haphazard approach took on more polish for his resort capsule for women and men.