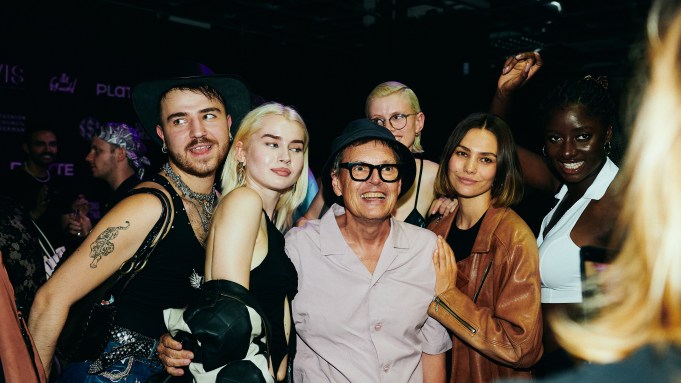 “It was a very Berlin show because it was all about freedom,” designer Lucas Meyer-Leclère said backstage after his runway show in the German capital last week.

The young Frenchman was reflecting on the city in which he had chosen to base his business after stints elsewhere, working for the likes of Karl Lagerfeld and Jimmy Choo.

Meyer-Leclère’s charismatic, occasionally messy, collection of painted and “retailored” vintage, luxury clothing — the designer doesn’t like the word “upcycled” — for his brand, LML Studio, was feted as one of the standout shows of Berlin Fashion Week, held over five days last week.

Rosa M. Dahl, the designer behind SF1OG, another of the brands that had local industry observers buzzing, calls Berlin “a very creative, diverse and open-minded city which makes it easy to feel free to follow your heart.”

But the long-running problem for Berlin Fashion Week was that this attitude, and the interesting outfits it engendered, never seemed to be reflected on the runways.

As industry observers have commented, “you’d leave a show and wonder why the clothes people were wearing on the street were far more interesting than what you’d just seen inside.”

But that was not the case at the most recent Berlin Fashion Week.

Last week, labels like SF1OG, LML Studio, Laura Gerte, Bondy and the Platte collective lined up alongside Berlin’s runway stalwarts. The newcomers’ firm focus on a no-holds-barred creativity, genuine sustainability and recycling, diversity and gender fluidity accurately reflected what’s actually happening on Berlin’s streets and in its galleries and clubs.

“There is this kind of Berlin style which we recognize from the club scene and from the streets,” explained Magdalena Schaffrin, co-CEO of studio MM04, the organizer of 202030 — The Berlin Fashion Summit, a platform that aims to network different sectors of the apparel industry. “For the first time, I actually felt that the people watching at some of the shows were wearing the same clothes as those on the runway. Brands like SF1OG are mirroring what is happening on the street and if we can develop that further, there’s a lot of potential in it.”

This evolution of Berlin Fashion Week is no accident, organizers say.

“When the Premium trade shows decided to move away from Berlin last year, we started discussing the future of the event,” Schaffrin told WWD. She was referring to the fact that in 2020, the commercial trade fairs that had previously run in tandem with Berlin Fashion Week and which had drawn buyers from around Europe, decided to move to Frankfurt (they have since returned to Berlin).

“There was an understanding that we needed to focus on younger talents because quite simply, they are the future,” Schaffrin said. “And in all my conversations with the bigger industry players, their ears would perk up whenever I started talking about younger talents. Because of course, they’re looking for new talent.”

“The space that was vacated [by the trade shows] has been filled by younger designers, collectives and smaller brands,” added Marte Hentschel, co-CEO of the Berlin Fashion Hub, a networking center. “These very active communities were always there. It’s just that before they weren’t so visible before or taken as seriously.”

The new focus on young talents is why, for example, the Neo.Fashion series of graduate shows, was on the week’s official schedule for the first time since it started in 2017. The event has grown from just a handful of local fashion schools to, this year, three days with 11 schools from around the country putting on 15 shows with 900 different looks.

Staged in a large art gallery, there were plenty of the wacky, non-commercial looks one would expect from recent graduates. But there were also fascinating ideas and silhouettes, some of them extremely well executed.

“I really believe things are changing,” enthused Jens Zander, the founder and organizer of the Neo.Fashion event, after the final showcase last Thursday evening.

For example, this is the first time a member of the Berlin Senate, which supports Berlin Fashion Week financially, had come to a Neo show; Michael Biel, the senator for economy, energy and industry, was there that night. “Finally, we are seeing media and politics giving us more attention. Now the industry really needs to come here because this is where they will find new talent,” he stressed.

Hentschel, who also heads the sourcing platform Sqetch, believes up-and-coming new Berlin-based brands have several advantages already. They are way ahead on sustainability and on the digital front, as the German capital has become a center for both of these sectors, she argued.

Additionally, Hentschel says, even though rents in the city are rising, “there is still space to be creative, so there’s not as much pressure to commercialize here. So we’re also seeing a trend of independent creators who have come here from established fashion capitals, looking for more freedom.”

All these aspects are now represented at the city’s fashion week, she says. “And that’s a very big chance for Berlin,” Hentschel argued.

However, despite the new spirit at Berlin Fashion Week, it’s also clear that the brands on show are preaching to the converted. Although local media were in attendance, it was hard to say how many serious buyers took part or whether there was a path that younger brands could take to ensure long-term profitability and professionalism.

Could a big, luxury house from Paris come to Berlin to discover a new star designer, for example? Could Berlin perhaps compete with London, as a center for wild inspiration and young fashion talent?

“It’s still too early to tell,” Hentschel opined. “This is just the beginning.” Anyway, she added, Berlin isn’t about competing with other fashion capitals and “a lot of these independent creators are not waiting to be discovered. They have a totally different way of doing business and a different kind of self-confidence.”

“As yet, there’s no path to industrial success,” Schaffrin conceded. “We do need more professional platforms, we need more networking and integration and also some stronger curation for quality.”

Despite this, the event organizers felt overwhelmingly positive about what was to come. “It’s just a gut feeling right now but there’s so much talent here, I think this is Berlin’s time,” Schaffrin concluded.

Hentschel was more definitive: “If buyers and media want to understand what’s happening in the future, if they have that urge for change, then they will come to Berlin for inspiration,” she asserted.