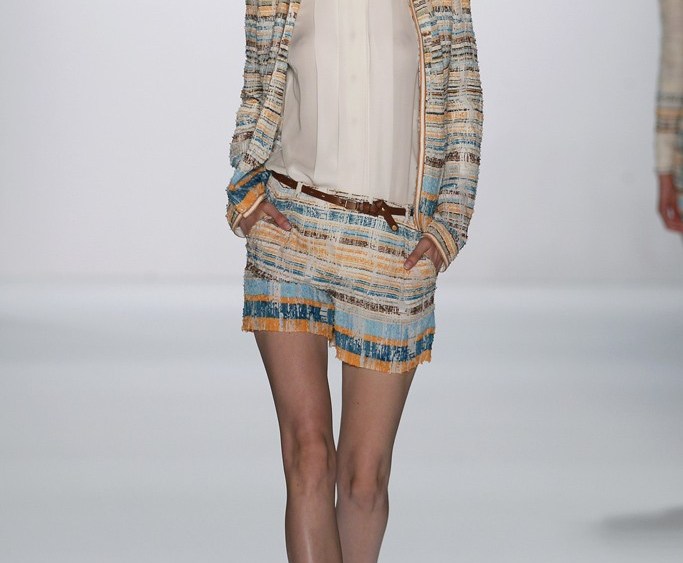 Despitethe turnout, some are wondering if it isn’t all too much, especially in a three-day time frame and with a 10th fair for the more volume-oriented segment — Panorama — waiting in the wings for January. With the action scattered all over town, and the MBFWB tent moved to a taxi-scarce site, transportation issues further frayed the nerves of those attempting to broadly sample the offerings. Those who remember how slim the fashion pickings used to be suggest too much might not be the worst problem to have. Still, the consensus is that, in the future, a sharpened focus will be called for if show organizers, brands, designers and retailers are to increase their relevance.

The strength remains in the contemporary and urban fashion sector with the Bread & Butter, Premium, Seek, Capsule and Show & Order shows. Bread & Butter’s Berlin-Tempel of Denim won kudos for its moves to pinpoint and reinspire denim innovation. Overall, the show’s 684 brands and visitors, placed at a steady 90,000 by industry observers, were in a fairly upbeat mood, and the show moved to its typically bustling beat. Nevertheless, there were some rumblings.

Though he had no complaints with attendance, noting the stand had more visitors this season than last, Tommy Hilfiger’s Europe chief executive officer Daniel Grieder expressed concern about a possible watering down of the B&B brand portfolio: “When I look around, there are labels I’m surprised to see here. This was meant to be a more exclusive fair with the best brands and I have a feeling that the door is more open than in the past.”

As for the proliferation of new trade shows in Berlin, especially by Munich and Düsseldorf-based organizers, B&B chief Karl-Heinz Müller was openly not amused at the B&B press conference. This could explain published rumors that have Müller eyeing Istanbul, despite the show’s long-term lease for Tempelhof and Müller’s constant denials of wanderlust.

Attendance at Premium was up 10 percent, which would bring visitors up to about 55,000 based on last July’s figures. Premium said international visitors, which make up more than 60 percent of the total, were on the rise, particularly from Asia, southern Europe, Benelux and France.

“Premium offers an enormous overview of bridge and small designer collections. A broader perspective doesn’t exist and, for retailers who live from that market, it’s a must,” commented Klaus Ritzenhöfer, owner of the designer oriented Apropos Concept stores in Cologne and Düsseldorf.

Ritzenhöfer was also favorably impressed by Show & Order though, in general, said he was surprised to see color and prints still going so strong.

So Youn Kim, buyer for LG Fashion in Seoul who was at Premium for the first time, said, “We’ve found exactly the kind of thing we are looking for: avant-garde, Scandinavian brands, dark clothes in cool interesting cuts such as those from David Anderson — these are the kinds of things that sell well in our store.

“What’s interesting,” she added, “is that we used to see these brands in Paris and now they’re here. Paris was too high end for them. Berlin — and Premium specifically — seems a much better fit.”

The third time was a charm for Capsule in Berlin, the international trade fair for emerging designers. Now housed in the roomy Postbahnhof — which is quite a hike from the other main venues — attendance nonetheless grew 30 percent. Based on last year’s numbers, this would be 3,000 plus. Buyers ranged from global retailers including Japan’s Isetan and Liberty of London to small trend shops.

“Berlin has a really unique point of view on fashion and that’s why we love to come to the city,” said Hannah Kim of Dune, a Tokyo-based fashion agency and retailer whose shop, N id, features edgy brands including Berlin-based Boessert/Schorn, Butterfly Soulfire and C. Neeon.

Neither Capsule nor the other Berlin fairs are particularly German-centric; the labels, like the visitors, represent an international mix. Yet, as Kim noted, Berlin fashion as a concept has become a valuable marker. Berlin press and sales agent Arne Eberle hosted his Collect showroom as a show-in-show at Capsule for the second time, with Berlin up-and-comers including Hien Le, Raphael Hauber, Sissi Goetze and Reality Studio.

“A lot of big brands like Hugo Boss, Adidas and Puma visited us, which will hopefully lead to cooperation with the younger brands,” Eberle said. He added representatives from key German retailers such as Breuninger and Peek & Cloppenburg dropped by, as did smaller domestic shops, a new and welcome development. “I think it’s really important that the German market begins to accept and order German designers because, so far, most of the German shops feature very little German design,” he explained.