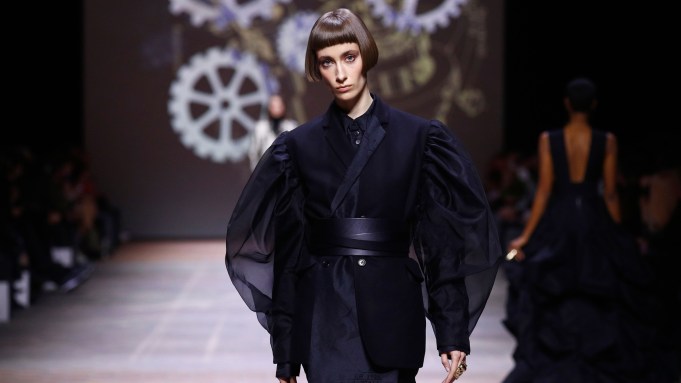 Last week, air-raid sirens blared above 300 people seated around a runway in central Berlin. The sirens were followed by the sounds of explosions in the distance, shortly before models wearing clothes by Ukrainian designer Jean Gritsfeldt emerged on the catwalk.

Events at Berlin Fashion Week were overshadowed by the war raging in Ukraine. The conflict feels close, only around a day’s drive away from the show’s venue, and there are also up to 15,000 Ukrainian refugees arriving in the German capital daily.

“Today is not the time to talk about fashion,” Gritsfeldt told his well-heeled audience in a video message beamed into the venue. He wouldn’t present a new collection or try to create trends, he continued, “because when you hide from bombs in shelters, subways or basements, no one cares what you are wearing.”

Gritsfeldt, who is 32, was not able to come to Germany — he remained in the Ukrainian capital Kyiv — but he sent instructions to around 30 volunteers about what he wanted on the runway. It would be a statement on current events, rather than a real collection, he explained. In Berlin, volunteers worked in shifts for several days to complete the collection.

“It was really tough, very emotional at times,” said Norma Quinto, acted as Gritsfeldt’s spokesperson in Berlin. At one stage, it seemed the designer might come to Germany for a few days. “But he told us, ‘No, I’m not leaving here,'” Quinto recounted.

At the end of Gritsfeldt’s show last Wednesday evening, the models — all of whom walked for free, wearing simple looks in cotton or jersey printed with words like peace, love and respect in English and Ukrainian — carried a huge Ukrainian flag down the runway. They were given a standing ovation.

This was not the only reference to the Russian invasion of Ukraine. In her speech at the opening of the event, Berlin’s mayor Franziska Giffey questioned whether it was even appropriate to hold a fashion event at a time like this.

“Yes, we can,” she concluded, explaining that the fashion sector could signal solidarity with Ukraine and that art and culture were part of Europe’s democratic values. The Berlin city-state government was supporting the event with more than 750,000 euros.

During the week, pins featuring the Ukrainian flag’s colors of yellow and blue were handed out and the event’s logo itself was re-colored yellow and blue. Many retailers gave 10 percent of any profit from sales last week to Ukrainian causes and also acted as drop-off points for physical donations.

Local designer Marcel Ostertag made an unexpected appearance before his brand’s runway show. “The situation, as we know, is not easy. It’s a s–tty time,” he told the audience assembled at Kraftwerk, a former power plant, now a venue in the central city where most runway shows took place. “Because some people are monsters.”

Despite the pall that war in Europe had cast over events, in the end, more than 60 designers from 70 countries played both minor and major roles at Berlin Fashion Week.

The five-day event began with three days of runway shows at Kraftwerk, interspersed with panel talks, most often focusing on sustainability and the environmentally friendly future of fashion, exhibitions of clothing and consumer-targeted events.

Among the eight designers showing at Kraftwerk was reality TV favorite Esther Perbandt. The Berlin-based designer is likely better known outside Germany as runner-up on the first season “Making the Cut,” hosted by Heidi Klum and Tim Gunn.

Other notables included Danny Reinke, whose wild ways with tulle and a deconstructed shoulder lifted his collection out of ladylike, and Finnish designer Sofia Ilmonen, who won the Mercedes-Benz Sustainability Prize at the Hyères festival in France this year.

Some of the brands most appealing to international buyers were shown at what is known as the Berliner Salon. This is a static exhibition, set up on the ground floor below the main runway inside the Kraftwerk venue, and featuring 31 brands. While many participants were familiar, the display was captivating and including designers’ drawings and mood boards.

Overall, Berlin Fashion Week had a more national feel than in years past, when trade fairs managed by local company, Premium Group, drew hundreds of international buyers to the city. Over the past two years, Premium Group has increasingly distanced itself from Berlin’s runway shows.

Which is why over the past few seasons, Berlin Fashion Week has worked hard on its own image, trying to find an identity more in line with the city’s arty, party-ready atmosphere. It has also hedged its bets somewhat, making some parts of the program business-to-business and others business-to-consumer, the latter an attempt to translate the local publicity that Berlin Fashion Week gets into sales in the city’s boutiques and ateliers.

Although a handful of local buyers attended runway shows and events, WWD was told by industry insiders they were vastly outnumbered by stylists and editors, along with loyal local customers.

It wasn’t clear whether publicity generated by local media was enough to draw shoppers to local stores. Several Berlin-based retailers, who participated in the business-to-consumer part of the week called Studio2Retail, told WWD they had enjoyed the program but that it had not necessarily translated to extra sales.

“My experience with Studio2Retail was positive,” said Kai Gerhardt, a newer Berlin-based designer who opened up his studio to potential customers. Mostly, he said, he noticed his website getting more hits. In terms of media attention, fashion week had not had a noticeable impact yet. Nonetheless, Gerhardt concluded, “I’m happy with the initiative and I would definitely do it again.”

One of the week’s programs, Fashion Open Studio, which aimed to bring together smaller brands who specialize in sustainable products with mentors and advisors, counted around 2,000 participants at its various events.

“We have already received feedback from retailers that their collections have proven popular,” said Carina Bischof, one of the organizers of the initiative.

Florian Müller, a Berlin-based consultant who has his own eponymous communications agency and has worked on Berlin Fashion Week events for more than a decade, felt the sustainability initiative had been particularly successful in that many of the smaller brands in the city had been able to learn from one another and also receive mentoring.

“I think that the sustainability issue is one that can give Berlin Fashion Week real direction in the future,” Müller suggested.

The space is sponsored by city authorities and opened with a display of vogueing, the dancers strutting their stuff wearing local designer labels.

For this fashion week, Platte organized an all-inclusive fashion show in its store windows, with a deliberately diverse selection of models walking and dancing on treadmills while an enthusiastic crowd of guests and passers-by on the street outside cheered them on.

“For us, Berlin Fashion Week was very successful,” said Arne Eberle, one of Platte’s organizers, enthusing about how much positive media coverage the cooperative received. Sales in Platte’s boutique, open since last October, also went up as a result of the project getting more exposure, Eberle noted.

There’s no doubt that Berlin has plenty of emerging and niche talents to be discovered, working with various levels of professionalism. But they are not necessarily found on the runways at Berlin Fashion Week. Maybe, a writer at German newspaper, Frankfurter Allgemeine, speculated, “the Berlin avant-garde does not want to be commercialized.”

Asked whether he thought Berlin Fashion Week was moving toward better reflecting the city’s unique style and thereby finding its spot among the international array of fashion weeks, Eberle was positive.

“After the [Premium] trade shows went, there was a lot of thought put into how to improve and add more diverse concepts,” Eberle told WWD. “And now there’s an increasing number of different platforms — we are one of them — showing young, fresh Berlin labels. I think we should be concentrating on them and other local designers. Right now, this [new direction] is just a small bud,” he concluded. “It needs to be nurtured and I really hope it will bloom.”