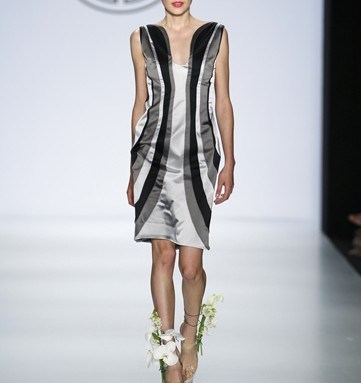 Berlin positively bounced back for spring 2009 with an upbeat round of runway and trade fair activity during fashion week here.

Under the umbrella of Mercedes-Benz Fashion Week Berlin, the 24 runway shows from July 17 to 20, both off- and on-site, presented a lively spectrum of contemporary fashion from German and international designers. The same can be said of Premium, whose 450 exhibitors attracted 15,372 visitors, slightly down from last season’s 16,354. Numerous satellite happenings and parties around town underscored Berlin’s edgy attraction, while the first Elle Fashion Star awards at a star-studded event illustrated the capital’s growing glamour potential.

The week’s organizer, IMG, also estimated that more than 15,000 visitors came to the new venue on Berlin’s historic Bebelplatz, compared with 10,000 last season. The shows were well attended and generally well received, and ran the gamut from creatively commercial to crisp and clean, chicly clubby, captivatingly crazy and even craftsy.

There were multiple highlights in the various stylistic camps. First up: The Seventies are alive and well in Berlin. Or, perhaps more accurately, the late Sixties on, as Michael Michalsky made clear via his 1968 photo backdrop at his show in a bus maintenance depot in the wilds of the Wedding neighborhood. And, while he came up with hand-beaded protest T-shirts proclaiming “No Blood for Oil” and integrated elements of police riot gear uniforms in his tailoring, the overall message, like his semipsychedelic posters all over Berlin, was one of joy.

Strenesse Blue designers Victoria and Gabriele Strehle also tapped into the era’s refined side and made it theirs. Prints charmed in a rose-and-gray georgette snake-print frock, accented with a dot print on the bib and hem; the hot lips crepe de chine shirtdress; a lozenge print chiffon shirt to wear with cropped plaid pants, or a crisp black-and-white cotton print shorts suit. Fluid knits included floor-length tank dresses; a lilac polo dress belted in brown and accessorized with a lemon leather tote, and a bloused, jersey slipdress smocked on the bodice and hips. Tanks came in crepe de chine and were sometimes sequined or super plain to wear with short shorts and cropped suede jeans, and Strenesse Blue even managed to get one popular pitfall — harem pants — to work.

“It was extremely positive from the color standpoint,” commented Kati Wempe, director of the specialty store Kaiser in Freiburg, Germany. “The silk pants in flowing qualities, the balloon pants, all looked convincing. We have to be careful with transparency, but otherwise, it was all very inspiring.”

This season’s Karstadt New Generation Award winner, Marcel Ostertag, is another Seventies fan, his interest focusing on the glitzier later years. His hallmark, the trenchcoat, was shown with feathers adorning the sleeves and sides, with pastel satin inlays, and in sparkling metallic red with hot pink accents. Tiny blousons zigzagged with black-and-silver lightning bolts came fringed in crystal or merged red metallic and hot pink satin.

True to form, Hugo Boss kicked off fashion week on Thursday, taking over a rundown harbor warehouse for the second Hugo collection by Bruno Pieters. The designer kept Hugo sharply tailored and strictly minimal, citing legendary female pilot Elly Beinhorn as well as Bauhaus architecture as his main inspirations. But the bow-tied looks on androgynous models had an even stronger Weimar feel. Spring’s ubiquitous HotPants were worked more like tap pants, and the little waiter’s jackets, vests, cropped double-breasted blazers and understated shift dresses all added up to one of Berlin’s most clear-cut fashion statements.

When deconstructed, the outfits had a lot of wearable — and salable — parts. “When we started doing tights and leggings three years ago, we sold a few pairs. And then it surged to 200 to 300 a year,” said Bruno Basso. And when he and co-designer Christopher Brooke, the digital-print specialists, bring their Aeffe-produced and -distributed collection to New York at the end of the month, they will be showing their simplest styles. Still, there is a clientele for the major pieces in Russia and Saudi Arabia, they said, “and it was interesting for us to have all these pieces out there on the runway.”

Berlin newcomer Scherer Gonzales also excels in fashion artistry. Trashy new-rave elements, such as plastic neon green shoulder straps and latex HotPants, contrasted with pleated taffeta and tailored bodices, gave the sense of a society lady gone techno in underground Nineties Berlin. Heavy-versus-light appeared to be the main theme, with delicate flowers trapped within the plastic see-through heel of platform shoes, light chiffon dresses trimmed with neon plastic or a sequined ballgown train that was as padded and heavy as a winter eiderdown.

The club generation is clearly growing up — at least in terms of the fashion they’re propagating. Young Berlin designer Kilian Kerner cast his vote for dresses, short and almost innocent or long and diaphanous. And his official new theme song, “Head Over Heels,” played by his favorite Berlin band, Splinter X, and their Bowie-esque lead singer, Ben Ivory, hinted at a growing romanticism in the scene.

New York-based German designer and sometimes bad boy Kai Kühne made his first Berlin appearance with no tussles to speak of. Instead, he presented severe tailoring and traditional city-girl cuts in funky techno materials. Below-the-knee pencil skirts and sleeveless shift dresses, with underarms cut away to the waist, were updated in black leather or viscose. And strapless minidresses and high-waisted miniskirts were given a futuristic twist using gold or bronze padded panels. Silhouettes, meanwhile, were Space Age Klaus Nomi-style, accentuated with cutaway V-shaped backs and sharp padded shoulders.

For many Berliners, the climax of fashion week was Vivienne Westwood’s Anglomania show, which culminated in cheers and a standing ovation. Westwood made up for not attending Berlin last season by sitting in the front row next to actress Kim Cattrall — and the designer was truly forgiven by the local press when she sent one model down the runway with a cheeky polo T-shirt emblazoned with the word Berlin across the chest.

The collection, in bright green, red, yellow and fuchsia, was as festive as the audience’s mood, with grape prints alluding to bacchanalian feasts. The main influences were Greek antiquity-inspired draped column dresses and, of course, the obligatory pirate references with cuffed boots, slashed striped jersey tops and dresses and big swashbuckling leather belts. This time around, though, things also were dressed up with prom-style skirts, stiff with Fifties petticoats, but almost mini in length.

The Premium exhibition had a sunny vibe and exhibitors said they were pleased with the quality of the visitor turnout. Retailers such as Diana Sponsel, buyer for the two Maingold boutiques in Würzburg, Germany, were equally satisfied with the show.

“This is a great trade show that works really well,” she said. “You can get the information you need really easily and it gives you a chance to broaden your understanding of what each label is all about.” Sponsel, who brought four of her 25 employees to Berlin, said she was particularly impressed by the label Drykorn. For spring, she is buying washed-out jeans, checked blazers, soft leather jackets, long hippie dresses and knitted belted cardigans. “Colors for next summer are really bright, and the real big thing will be scarves.”

Norbert Klauser’s second edition of Stark at an old switching station in Prenzlauer Berg was again atmospheric, but attendance remained light. Another weak link in the chain was Project Gallery, showcasing young avant-garde designers in two gallery spaces in Mitte. While the designers themselves and the concept of linking fashion and art showed promise, the locations were out of the way and attracted little attention. �