The Berliner Mode Salon Pops Up in KaDeWe

The German designer platform, now in its second season, has gained a retail presence at Berlin's KaDeWe department store. 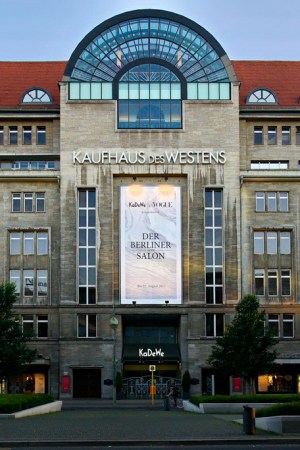 The Berliner Mode Salon, a group exhibition designed to underscore the variety — and quality — of fashion designed in Germany, did more than expand from 18 to 30 designers in this, its second season. In addition to the Salon’s Friday run at the Kronprinzenpalais as Mercedes-Benz Fashion Week Berlin drew to a close, the presentation popped up in the ground-floor atrium and in all the front windows of Berlin’s — and Germany’s — most upscale department store, KaDeWe.

The retailer has installed a six-week pop-up shop for 25 of the Salon’s designers, the lion’s share of which are not carried in KaDeWe’s normal assortment. The shop opened on July 6 but because of Fashion Week activities and schedules, KaDeWe executives and all the designers as well as Berliner Mode Salon initiators Christiane Arp, editor in chief of Vogue Germany, and Marcus Kurz, managing director of Nowadays, first gathered in the atrium for a go-see late Saturday morning.

André Maeder, CEO of the KaDeWe Group, reported the shop has done “really well” in its first week. “I always say people coming to us need nothing. When they’re inspired, they buy, and a department store like us should be playing with things like this,” he said, pointing to the curated capsule collections for fall from many aspiring German designers, as well as a few more well-known names such as Dorothee Schumacher, Talbot Runhof, Allude and Odeeh.

“They’ve sold well, and most of these are brands nobody knows,” Maeder continued. “I frankly didn’t think our fashion customer would want to shop in the middle of the atrium, but it turned out not to be the case.”

The shop will remain open till Aug. 22, and both the atrium and window design look decidedly upmarket. “This is not a charity undertaking,” said Petra Fladenhofer, KaDeWe director of brand and marketing. “We did this because we believe in Berlin as a fashion location and we believe in fashion from Germany. Which doesn’t necessarily mean we need to have all these labels in our assortment, but if they sell, our buyers will definitely be taking a closer look.”

Young designer Tim Labenda said he’d already gotten good feedback from the store, “because three of the articles in our capsule selection are no longer there. We’re quasi-sold out. And I have to say I’m impressed with what KaDeWe has done. The gray-in-gray interior design really looks great.”

Feedback on The Berliner Mode Salon itself has also been primarily positive. Mercedes-Benz got involved this season, presenting looks from Hyères finalists Annelie Schubert, Anna Bornhold and Christina Braun, and there was a growing sense of community among the designers and attending German journalists that bodes well for the newly founded Fashion Council Germany.

Mytheresa.com’s fashion director Justin O’Shea noted everyone seemed to be happy and in a very good mood. “There is an interesting potential and this is a good platform to grow from here.”

Philipp Bree, founder of accessory brand PB 0110 and a new participant at The Berliner Mode Salon, was more than satisfied. “I like the vision Ms. Arp and Mr. Kurz have of showing the relevance of German fashion design,” he said. “The other thing is the execution of the vision, and I think that was marvelous.” Bree added that the group exhibition had been a great success for PB 0110. “We met new customers, press — big and small — and celebrities. I ran out of business cards and look books. The icing on the cake was the translation of the Berliner Mode Salon into the KaDeWe. A fantastic presentation of the idea. I haven’t seen anything similar so far. I hope it will go on.”

Mario Eimuth, CEO of Stylebop.com, agreed that the presentations were a success. “Berliner Salon definitely hit its stride this second season. It provides a great platform for emerging German talent, facilitating close interactions between the designers, international press and buyers.” He noted that the inclusion of Vogue Salon and some of the week’s major shows, including Lala Berlin, in the Kronprinzenpalais venue was an added boost, making the experience much more energetic and relevant. “Designwise, there was plenty to admire, including Marina Hoermanseder, whose innovative materials and keen sense of construction bodes for great things ahead,” Eimuth said. “We will also be following Galvan, featured in the Vogue Salon, whose eveningwear is already garnering quite an impressive following.”

Josef Voelk, co-owner of Berlin specialty store The Corner, noted, “Berlin Fashion Week is finally taking shape. [The Kronprinzenpalais] is a wonderful location for a concentrated presentation of all the collections. One must definitely make use of this potential so that international buyers get an idea of how German fashion functions.”

With that in mind, word has it Paris is next on the agenda. While details could not be divulged at the moment, The Berliner Mode Salon’s designers may well be seeing the inside of the German embassy when Paris Fashion Week begins on Sept. 30.