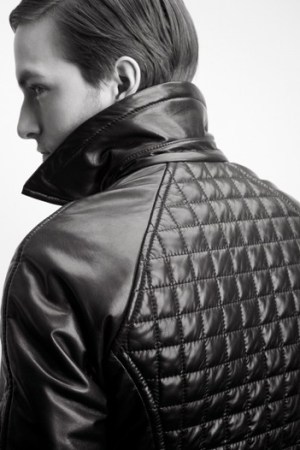 There are certain staples every guy should have in his wardrobe, and the leather jacket is one of them — at least that’s the mantra of men’s wear designer Barnabé Hardy, who unveils his debut collection of sleekly sculpted leather jackets this week in Paris.

This story first appeared in the March 12, 2009 issue of WWD. Subscribe Today.

“The handbag is to a woman what the leather jacket is to a man,” said Hardy from his Paris-based studio. “It’s an outerwear companion for the urban man, combining a chic silhouette with a host of intelligent details to assist in everyday life.”

After cutting his teeth at Balenciaga and launching the label’s men’s wear alongside creative director Nicolas Ghesquière in 2002, Hardy, 33, was ready to fly solo despite the economic turbulence.

“In today’s economic climate, less is better,” he said. “Brands have overdiversified their offers. Clients are looking for specialized savoir-faire. This is a positive for young designers focusing on just one element of the wardrobe. We have to take advantage of the moment and become the new classics.”

Nearly a decade earlier, Hardy launched his Les Minets par Barnabé collection of sweatshirts with glitter galore, which were a hit at Paris retailer Maria Luisa. Using his own savings and added income from freelance work to finance his latest project, Hardy’s new collection has matured with the designer.

The jackets come in nine different styles in black, chocolate and dark khaki, ranging from cropped bomber and motorcycle jackets to lengthier parkas — all in baby calf, dipped lambskin or shearling. Details run the gamut from origami-like folds, double cuffs and matelasse backs to hoodies, studs and leather-covered cording. Hardy put the focus on functionality with specially adapted pockets for keys, wallets and iPhones.

“I really wanted to think about the customer,” he added. “The target is not the fashion victim but the regular guy who goes from business meeting to dinner parties or from interviews to openings. One who wants good quality for good value.”