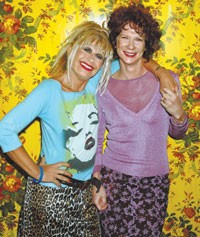 NEW YORK — After 40 years in the fashion business, the irrepressible designer Betsey Johnson knows the secret to a lengthy career — keeping your name out there.

Johnson, in recent years, has initiated an aggressive campaign to open retail stores, negotiate new licensing deals and expand global distribution. In just two years, Betsey Johnson has signed eight licensees, and new retail stores are popping out at a rate of three to five a year.

“When you think your name is so well-known and there’s so little product available, it makes sense to have many more products,” said Johnson at her showroom at 498 Seventh Avenue here.

Dressed in a skirt from her 1978 collection and a rock ‘n’ roll T-shirt, Johnson was, and continues to be, the walking version of her collection. “We’re finally not thought of as kooky crazy,” she said. “I mean, no one in business for more than 25 years is that kooky crazy.”

Johnson attributed her current surge to timing. “I don’t think that companies thought we could get to the customer they wanted,” she said. “They thought, ‘You’re a little too far out.'”

Chantal Bacon, Johnson’s business partner of 27 years, said they were “moments away from signing with a major jewelry company and a company that produces sheets and towels.” They’re also “in talks,” she said, with companies to launch fragrance, swimwear, outerwear, eveningwear, bridal and cosmetics. Bacon said the company would generate $55 million to $60 million in retail sales this year, excluding the licensed categories. Including the licensed categories, the retail volume this year is anticipated to reach $120 million.

“The identity is really so strong now that it’s really possible to look at something and say, ‘That’s Betsey, that’s not Betsey.’ That comes from having a strong point of view — without that, you can’t spread to all these categories,” Bacon said.

“People are very interested in what Betsey has to offer,” said Chris Royer, president of Consulting by CRC, the consulting firm here that advises Johnson on licensing negotiations. “Women and girls can identify with the prints and the colors.”

In addition to the new licensing deals, Betsey Johnson in April franchised its first store in Dubai, extending its global reach. “We never really wanted to own stores that far away,” Bacon said. “We’ve been very insular and we can only do so much. We can’t do all of these things alone.”

Johnson added, “We just got a call from a woman in Scotland [inquiring about franchising]. We’ve always said no, but Dubai was such a nice experience. The way we come off on our own turf is very different from how we come off in department stores.”

Distribution is another hot topic at Betsey Johnson. The company recently signed with Groupo San Jose, a distributor in Spain. “We needed a distributor who was truly just a distributor,” Bacon said. “This gives us a platform to go from.”

Bacon added that the company also was seeking a new distributor in Japan. “We had such a great business in Japan, but then we signed with a department store,” she said. “Once they took it, they cut everyone else out. They didn’t do it like they promised, so we kind of lost our base there and now we have to build it up again. We have a very loyal distribution in Japan and we would love to do stores in Japan the right way. That would be a natural for us.”

Johnson believes that her lasting appeal to consumers comes from her ability to relate to them. “I’m a girlfriend to my customer. I never wanted to come into this industry and be on a pedestal,” she said, noting that she has dressed 13-year-olds as well as their mothers. “I don’t know anyone who talks to that girl louder than we do,” Johnson said.

She is in talks to write a home decorating book and, Betseyville, Johnson’s home in Zihuatanejo, Mexico, will open as a four-room hotel, beginning on Thanksgiving Day.

“There are people who’ve done clothes, lifestyle and home so beautifully — like Ralph [Lauren],” Johnson said. “It’s just kind of obvious: If you like our clothes, you’ll like our take on wallpaper, curtains, handbags and shoes. It’s a vibe that’s accepted now … finally!”