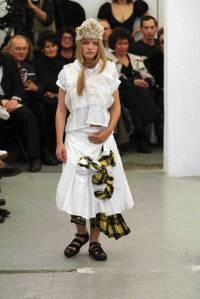 There are two sides to this spring’s Paris girl: The one that’s looking for romance à la Rei Kawakubo’s Comme des Garçons and Veronique Branquinho, or the one that wants to live in rockstar sin, as in Hussein Chalayan and Ann Demeulemeester.

Comme des Garçons: Remember Rei Kawakubo’s intellectual sexcapade several seasons back? Could she, would she, play to the trend and revisit the motif? Rhetorical! Of course not. Sometimes Kawakubo is ahead of the curve; more often she bends a different way entirely. And in her Comme des Garçons collection, she did just that. In this season of sex and more sex, Kawakubo’s message was, well, the opposite of sex — heavy, dark layers of fabric, ingeniously arranged — and one fixed firmly in her Eighties roots.

Yet it wasn’t the opposite of romance, as an eerie melancholy wafted through the multilayered and festooned creations, sometimes hinting vaguely at a 19th-century shopgirl gone mad. Often, the effect was quite beautiful. Kawakubo’s creative and technical mastery make her clothes intriguing, and those elements were in full flower here. She worked her fabrics remarkably, twisting, turning and often shaping them into long, thick decorative braids. These descended from the backs or sides or jackets and pants. She also twisted material into rosettes, and bunched big handfuls into makeshift bows.

For the most part, Kawakubo worked in black, gray and army green, giving the collection its ominous air — piles of raw-edged darkness don’t exactly prepare a girl for a joyride. But the designer did lighten up at times, with the occasional respite of ivory, delightful yellow and black tartan remnants worked into some of the skirts, and great T-shirts printed with a logo or a single tiny heart. Once in awhile, her madcap side even got the better of her, and then everything looked in the pink — hot pink, that is — as in a delightful dress trimmed with pompoms.

It all made for a lyric yet dissonant presentation. And one that ultimately disappointed, because, for all its technical ingenuity, this collection did not offer that gasp of surprise that characterizes her most remarkable work.

Some guests showed up expecting A Major Political Statement. That’s because Chalayan’s invitation pictured a little girl, her enormous grin indicating four recent visits from the Tooth Fairy. Cute? Not so fast. She wears a black blindfold, and points a gun at some unidentified presence. Backstage, Chalayan explained that he used the troublesome image because he wanted to note that, in times of war, children emulate the violent behavior of adults during play. (The gun looks very real.) “It’s about the kind of world I don’t want to live in,” he said. “All my work is about contradictory motives. If people find it distasteful, they should pick up a book or read a newspaper and see what’s going on in the world. That’s reality, and maybe people should reconsider their sweet, quaint lives that are not affected by the horrors of this world.”

Okey-dokes. But what that thought had to do with the collection — too deep to decipher. What was clear is that Chalayan has a rock star fantasy. He learned bass guitar — sort of — just so he could hit the stage with three other guitarists and two drummers and play live during the show. His models appeared, walking along changing graphic light projections on the floor. Then, politics took a backseat to good clothes. Chalayan opened and closed with sexy, stretchy dresses, sometimes in bright colors, that fit right in with the carnal mood of the moment, their asymmetry and layered porthole cutouts perfect for sexpot types with an avant-garde streak. In between, he offered pretty, breezy clothes with a vaguely safari feel — jackets, shirts and pants worn in relatively wearable layers and detailed with utilitarian touches. It was his most manageable, sexiest collection yet — nothing cryptic about it.

Veronique Branquinho: Deep down, Veronique Branquinho’s clothes have always been girlish, even in seasons when the designer made forays into rockerdom or when she took the intellectual route. Her look is a little wistful, a little delicate, and while everyone else is thinking sex, Branquinho has romance on her mind.

Come spring, her lass will step out with her heart on her sleeve, flitting around in flirty dresses done in a bitsy lavender calico print or camisole tops with triple crisscrossing shell straps — her simple summer jewelry. Branquinho’s stone and shell straps graced white linen overalls and simple dresses, and were echoed by the trailing ribbons that decorated the backs of calico vests. Even her soft angora sweaters in pink and lavender were made from basket-woven knit strips.

Why then, did Branquinho’s breezy approach turn suddenly moody with grim gray and brown skirts, vests and men’s pants? The bookish look has served her well in the past, but this season it was her sweet side that served her best.

Ann Demeulemeester: Rock ’n’ roll will never die, and neither, apparently, will Ann Demeulemeester’s love for its trappings. For spring, she showed hard-rock classics from leather motorcycle jackets to leather bondage pants and rough concert T-shirts printed with Demeulemeester’s slogans, “SIN” and “LIVE LIFE.” What looked new — and could muster up interest for a style that hasn’t been reworked once too often — were an elegant zippered leather coat and miniskirts that buckled around the hips.

Also in the lineup were saggy boxer shorts in silk and dropped-crotch pants of all varieties, even a droopy tank dress with leg holes that sprouted at the knee. But none of these made much sense. One editor even called the show a “rock ’n’ roll tragedy.” After all, how could Demeulemeester’s motorcycle mama hop on her bike wearing dhoti pants?