The threat of war had its first Oscar-related impact Tuesday as the Rodeo Drive Committee postponed its inaugural induction for the Walk of Style. 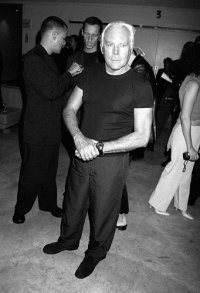 LOS ANGELES — The threat of war with Iraq had its first Oscar-related impact Tuesday when the Rodeo Drive Committee decided to postpone its inaugural induction gala for the Walk of Style honoring Giorgio Armani.

This story first appeared in the March 12, 2003 issue of WWD. Subscribe Today.

And the Walk of Style might not be the only thing canceled. As rumors of war grow, so does nervousness over whether America will want to watch Hollywood stars on the red carpet if U.S. troops are battling in Baghdad. While Academy Award officials insist the Oscars will go on, there are reports that contingency plans for possible cancellation are being developed just in case.

Although an Armani spokesman in Milan said the designer at the moment plans to go ahead with his trip to Los Angeles next week to take part in a slew of social events scheduled around his visit and the Oscars, sources say it was the likelihood of his being a no-show at the March 19 event due to the potential of war that prompted the event’s cancellation.

“Mr. Armani didn’t want to travel at this time,” said a high-ranking source here close to the event.

Armani’s camp, however, was adamant Tuesday that is not the case. “There are still two other significant events happening that week,” noted the company’s West Coast spokeswoman, referring to the dinner Vanity Fair editor Graydon Carter is throwing in honor of director Martin Scorcese and Armani Wednesday night at Mr. Chow, as well as the Thursday evening party at Emporio Armani for People columnist Steven Cojocaru and his new book “Red Carpet Diaries: Confessions of a Glamour Boy.”

Those events will be much smaller and much more low-key than the induction ceremony, continued the spokeswoman. “It seemed inappropriate to have such a large-scale festivity at this time when it can stand on its own at a later date.”

Some 600 guests, including many of Armani’s celebrity friends, local politicians and other VIPs, were expected to turn out for the induction, the first in what the Rodeo Drive Committee hopes will be dozens honoring style icons along its tony thoroughfare.

The 200 block was set to be roadblocked for the sunset festivities, hosted by Mercedes-Benz USA and W magazine (owned by WWD’s parent company, Fairchild Publications) and the unveiling of artist Robert Graham’s 14-foot “Torso” sculpture on the street median. Graham’s sculpture also served as the model for the ceremonial trophy. The event, including the public viewing of the statue, is now indefinitely postponed.

“In light of what’s going on in the political arena right now, it’s just not the time to celebrate this beautiful statue Robert made and celebrate the Walk of Style,” Rodeo Drive Association president Peri Ellen Berne reiterated Tuesday. “We really wanted this to be a joyous time, but not when lives are at stake.”

Despite no official word that the 75th Academy Awards or any of the more than two dozen teas, dinner galas or promotional suites slated during the seven days leading up to Oscar Sunday have been shelved, the question of whether to go forward with business as normal looms large. Services surrounding the Oscars, from beauty treatments to hotel rooms, are estimated to bring $61 million into the regional economy. Global revenues — from film attendance boosts to take-out business the night of the televised event — surpass the $600 million mark, according to industry estimates.

Yet the political climate is throwing a shadow over whether this is a time for glamour or not. Although it didn’t appear to dissuade starlets at last Sunday’s Screen Actors Guild Awards — considered one of the best-dressed and most colorful fashion turnouts ever for the event — the after-parties were reportedly less exuberant than in previous years.

As of Monday, Gil Cates, producer of this year’s Academy Awards show on March 23, told the Los Angeles Times that war or no war, “the show will go on.”

Still, it’s widely believed that a contingency plan is in place or in development should a military strike occur. After Sept. 11, the 2001 Emmys were postponed for a month to Oct. 7, the date the U.S. government decided on its surprise strike in Afghanistan. After a second postponement, the show, albeit a markedly scaled-back and more somber version, finally took place on Nov. 4.

The Valentino team confirmed it will be in town to lunch with stylists and tend to actresses through Sunday. Matthew Williamson remains set to arrive early next week, as is Elie Saab, according to both designers’ Los Angeles publicist. Garrard creative director Jade Jagger is still intending on moving into the Beverly Hills Hotel to meet with celebrity clients through the week, according to a spokeswoman. And Stella McCartney, who will host a lunch at the W suite, remains onboard.

Echoing other publicists, however, the Armani spokesman added: “We are reviewing the situation day-by-day. I spoke with the publishers of Vanity Fair and In Style, as well as the public relations people at Versace, on Monday to get a sense of where their heads are and the sense I got is that we are all waiting to see what happens. It’s really now up to Mr. Bush or the United Nations to make a decision.”