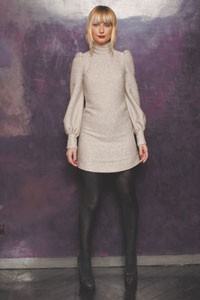 Biba, that hot British boutique label from the swinging Sixties and early Seventies, introduced its first ready-to-wear collection here this week. But while the original brand produced lines made from cheap and cheerful fabrics, this comeback collection, designed by Bella Freud, is being repositioned on a luxury level — with elevated price tags to match. Retail prices in the U.S. will range from about $180 for a sweater to a mighty $3,300 for a coat.

Inspired by founder Barbara Hulanicki’s creations, retro looks take a jolly jaunt across the decades, from a Twenties-style cocktail dress and muskrat and angora coat, to a Marlene Dietrich-style pantsuit and silk blouse with billowing sleeves. For those in the mood for fun, cheeky knits and Twiggy-style Lurex metallic minidresses come lifted straight out of Sixties London, while a satin halter-neck jumpsuit looks destined for the disco. The line also features new versions of iconic archive prints, such as paisley and shell-shape swirls, either enlarged or worked in new colors.

The brand’s accessories line, introduced for spring, has grown to accommodate a better-heeled, 21st-century Biba girl — featuring golden costume jewelry priced around $350, cute Lurex metallic snoods for $160 or chunky patent leather and metallic B-clasped belts for $250. Shoes, ranging from $350 to $1,000, remain cutely clompy, with platform styles running the gamut from gold to laser-cut to Art Nouveau styles. But what could turn out to be bestsellers are the brand’s rainbow palette of stretch suede boots and its eel-skin line, featuring mary janes with golden B buckles.

“We’re paying homage to the brand, but have fine-tuned its designs using more luxurious fabrics,” says Michael Pearce, chief executive and creative director of the brand, who sees gold in Biba’s heritage alone.