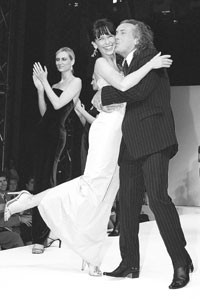 DALLAS — The kickoff market of FashionCenterDallas raised traffic, spirits and most importantly, bookings, according to reps.

“This is fantastic,” said Robert Bronstein, president of BCBG. “The first day of the show we made almost last year’s show. I’m hearing from my colleagues that there is a buzz, and they’re doing a lot of business.”

“We felt it went great, and we really saw that when we looked at attendance,” said Cindy Morris, chief operating officer of the Dallas Market Center, noting that registration was up 70 percent over last year. “So many people commented about the natural light and the fact that you could look across the atrium and have a feeling for the energy and floors.”

Retailers from 18 countries checked out the new venue, and buyers from stores that had not previously shopped here swelled 150 percent, Morris pointed out. An unusual number of buyers were still in the building perusing product on Monday, the last day of market, which is traditionally quieter. Some of the hype also came from drawings for five Volkswagen Beetles that were given away.

The new mart rings the sun-lit atrium atop the 15-story World Trade Center within the Dallas Market Center. “The feeling is great, and the energy is great,” said Marilyn Wohlstadter, who owns East 61st, a local shoe and accessory shop. “The lighting makes a big difference.”

Crowds flocked to the fashion shows, especially the Friday evening trend show featuring Richard Tyler. At its finale, Jennifer Love Hewitt couldn’t resist camping up her runway stroll with a curtsy at the end of the runway. “I have always wanted to do that,” she said to Tyler before presenting him with a Lifetime Achievement award on behalf of the DMC, saying, “You make us look sophisticated and sexy, modern and timeless.”

“I love it here,” Tyler said earlier at his booth in the Scene show, where he introduced Eve, a bridge eveningwear line, and showed his contemporary collection, Tyler by Richard Tyler. “The organization is great, and business is good. We’ve had a lot of stores in from places like Beaumont and Austin [Texas], which is great because we never have an opportunity to sell them.”

Tyler planned to do a little shopping of his own for garden pieces on lower floors of the WTC that showcase gifts and home furnishings. “There’s some great stuff down there,” he said.

Tyler wasn’t the only shopper who felt the urge to splurge. Spring business has been so much stronger than last year, when the nation had just gone into the Iraq war, that many buyers said their budgets were up between 10 and 40 percent.

It certainly helped that fall fashions were ladylike and colorful, sporting a palette of pink, plum, magenta, blue, green and chocolate. Ponchos were popular, along with pleated miniskirts, soft chiffon tops and dresses, tailored tweedy jackets over jeans or flirty skirts, novelty coats and fur sweaters.

“We bought them as suits, which out of nowhere are taking off,” Skoda pointed out.

Connie Sigel, owner of the Elements boutique here, was careful to invest in special pieces, such as Ettie’s crocheted shawls, Ilo and Fred’s velvet jackets with ribbon bows and Fray’s pink mohair sweater with satin trim.

“It’s a jeans business — everyone wants something cute to wear with a pair of jeans,” she observed.

With a budget up 10 percent, Domingue was writing an order for Laundry’s paprika yarn-dyed poncho and a chocolate tweed coat with leather trim over an ecru chiffon halter with a chocolate leather skirt.

Brad Hughes & Associates’ showroom of bridge and contemporary collections such as David Meister and Liliu hopped nonstop. The room was one of the busiest in the building, not in the least because it had a bistro area with three tables, leather chairs and a banquette where buyers could relax.

Michael Singer, Hughes’ business partner, remarked that at first they were loathe to give up selling space, but the cafe proved so popular that it encouraged buyers to stay longer — and spend more.

Andrea Jovine, one of 180 designers who came for the FCD launch, introducing her bridge collection to specialty stores after a year of selling to Saks Fifth Avenue and Dillard’s. The company hopes to double sales this year to $20 million.

Jovine’s collection is produced by International Women’s Apparel, a division of Hartmarx Co. IWA president and chief executive Tom Hall noted that he had seen many changes at the Dallas market over 30 years.

“This is a chance to rejuvenate the whole process,” Hall said of FCD. “The way it’s organized by category is more convenient for buyers. I’m hoping that Dallas will become a bigger draw from more states.”