Big Top in the Big Apple

In 1972, WWD’s society reporters covered the arrival of the elephants for the annual Ringling Bros. and Barnum & Bailey Circus.

By Court Williams on May 6, 2009
View Slideshow 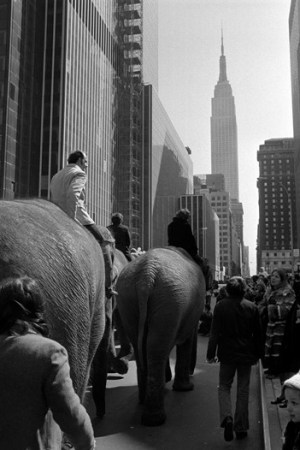 It didn’t take a Brangelina or Tomkat sighting to attract the Eye desk’s attention in 1972. In March of that year, WWD’s society reporters covered the arrival of the elephants for the annual Ringling Bros. and Barnum & Bailey Circus. “That Babar? That Dumbo?” a little boy asked as the pachyderms lumbered their way across 12th Avenue at 35th Street on their way to Madison Square Garden. Some TV and newspaper media were actually perched atop the animals to get a better angle on the scene, a situation that caused a bit of drama at 34th and 9th. Bob Teague of WNBC-TV slid off the back of baby elephant Putsi into the street. “Stop the parade!” the elephant driver shouted, lest Teague be trampled. One mother said to her kids, “Wave at the clowns,” thinking it was all part of the act.

Click here to see more images from the pachyderm parade. >>