The 17-year-old singer stars in the first campaign by MCM global creative officer Dirk Schönberger, who arrived at the German brand in October.

The 17-year-old “Bad Guy” singer, whose album “When We All Fall Asleep, Where Do We Go?” hit number one in the Billboard 200 on the week of its release, appears in a series of digitally collaged analogue shots by South African photographer Lea Colombo, mixing MCM accessories such as bucket hats and bum bags with slouchy tracksuits and oversize parkas.

“For me she’s a bit of a role model for younger generations, even though she would probably hate the word,” MCM global creative officer Dirk Schönberger told WWD.

“I’ve seen her play concerts and…she tells her fans to be themselves without holding back,” continued the designer, who joined the German brand in October after spending eight years as creative director of Adidas.

“This is such a strong message at a time where uniformity is somehow on the rise. She’s a game-changer: Not only is she disruptive, but it also feels like she can’t be corrupted. It’s not a marketing trick: She is that person. She really stands out in the current music scene.”

The campaign, which also features hip-hop artist Childish Major and will hit all the brand’s communication channels starting July 18, is Schönberger’s first since joining MCM, which is owned by South Korea’s Sungjoo Group.

Its youthful feel — Eilish is 17, Colombo 26 and Major 27 — is in line with Schönberger’s repositioning of the leather goods brand as a “younger, ‘new school’ luxury brand.”

“She’s talking to a very different customer, but if you look at Asia, our customer base there is already pretty young,” Schönberger said of Eilish, who counts 31.1 million Instagram followers. “For me, age is not necessarily the major driver. Had Billie been 30 or 40, her personality, attitude and what she stands for would have still been the same.” 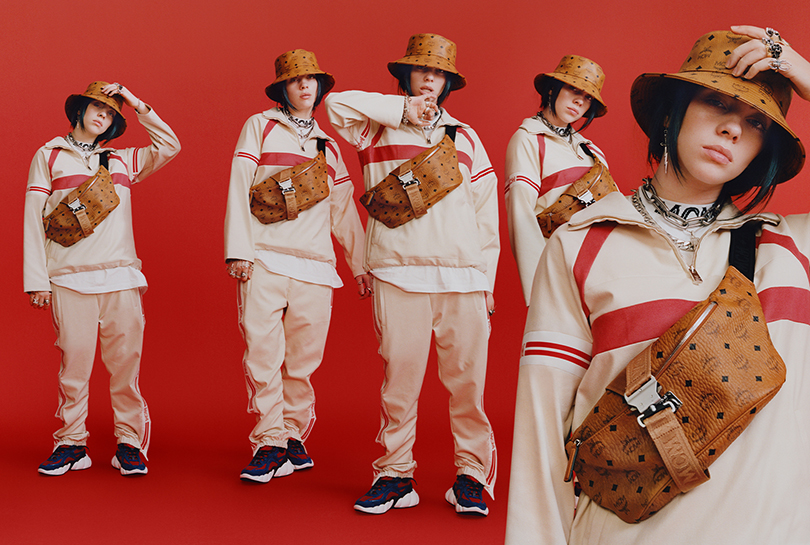 The collection featured in the campaign was designed by the MCM studio but edited by Schönberger, with a push on apparel and footwear. His first full collection for MCM will debut for spring 2020, with a small fall 2019 capsule planned for September.

“The expansion toward becoming a total look brand will go step by step,” said the designer, pointing out that accessories account for 80 percent of revenues at MCM, with shoes and apparel making up the remaining 20 percent. The brand aims for more balance.

“I’m not delusional: MCM is a leather goods brand, and we will not push that aside,” Schönberger said. “But we want to build the ready-to-wear and shoes business organically.”

In February, MCM debuted a new retail concept named “1976 Berlin,” a 1,500-square-foot “white cube” for experiments, with a perpetually changing, sharply edited selection in lieu of a conventional store, in the former car repair workshop in Berlin where Schönberger and his 20-strong team are based. The concept was also rolled out on one of the floors of the MCM flagship in Tokyo.

“I strongly believe that a brand that just makes products is not a real brand today anymore. You need to create cultural context and a real dialogue,” said Schönberger, adding that there will be more of these cultural spaces to come.

The existing MCM stores — the brand has 650 points of sale in 40 different countries — will be updated to reflect this new concept, albeit in a more traditional way. “The new MCM stores will be modernized, but they will have those same recognizable elements that make them flagship stores,” the designer said.

Schönberger also announced the brand was working on sustainability issues — starting with packaging — and rethinking its seasonal collections.

“I feel as a consumer I can never buy the pieces when I really need them,” he said. “I know this is the system, but it’s becoming more and more absurd. How can a collection for summer drop in late November? The solution could be different drops rather than seasons. We are working on something that might make it easier for us.”