The award-winning designer's 12-foot worktable in his Alabama studio is a jumble of collectibles. 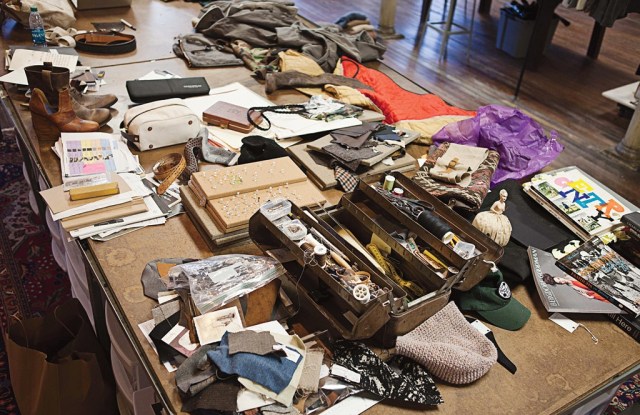 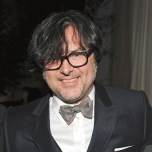 Award-winning designer Billy Reid’s 12-foot worktable in his Alabama studio is a jumble of collectibles. The family heirlooms, flea-market finds and other mementos combine to influence Reid’s collections, which are steeped in the roots of American workwear, as well as the atmosphere in his stores around the U.S.

“I bought this table used in 1997 and have worked on it since the first day I started in business.”

“My wife curates a lot of our vintage cuff links and artifacts. This box is filled with mismatched cuff links.”

“These are miniature corkboards. Once we start merchandising the collection, we segment it on these little boards. It keeps things organized and is like a line plan for the collection. They’re empty because we’re getting ready to start up again.”

“This is another Salvation Army find. It’s a liner for an old lieutenant’s jacket. It’s from the Sixties, and I like the unusual stitching on it.”

Stack of Gentry magazines: “I often refer to these. They remind me of Esquire’s Black Book, with swatches and clippings. They’re like interesting pieces of art. I’d like to collect them all.”

“It’s a Persian area rug that we cut and made into a large pillowcase. On top of it is an old Calvin Klein corset belt we found for $1 at the Salvation Army. I thought it was an interesting color.”

Fashions of the Roaring ’20s book: “I was doing some research on the 1920s era and used this book.”

“This is actually a pincushion. I found it in an antiques store for $5. It’s made of carved wood, and it has a broken-down look about it, but it’s still elegant.”

“There’s a saddle-colored wedge we’re working on, and the others are prototypes for our shoe line.”

“We make Dopp kits. This is a prototype of one in a heavyweight duck cloth.”

Swatches: “There’s no telling where we got them, probably from the boxes under the table.”

“I’m not sure what’s in the plastic bag, but I’m hoping it’s fabric swatches.”

“This is a hand-knit that a friend of my mother’s made. I like the shape and the stitches.”

“It’s just an old toolbox. I came back from a trip, and my assistant had found it. It’s a perfect way to try and keep me organized, which isn’t easy.”

“It’s a hat from the Southern Foodways Alliance, a nonprofit organization that we do merchandise work with from time to time.”