Researchers at Nokia and the University of Cambridge have created a nanotechnology concept called Morph that will be on display at New York's Museum of Modern Art through May. 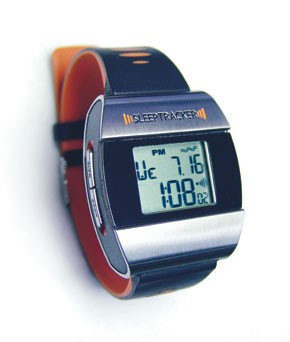 Researchers at Nokia and the University of Cambridge have created a nanotechnology concept called Morph that will be on display at New York’s Museum of Modern Art through May. A stretchable, flexible self-cleaning mobile device, Morph can take the form of a credit card for dialing, an ear bud for talking and a bracelet with a programmable print (like computer wallpaper) for wearing.

The $179 Sleeptracker Pro monitors sleep patterns and will wake you at the most optimum time — when you are already almost awake — within a window you set. It also tracks “awake” periods throughout the night so you can see if you’re getting a good night’s sleep.

Target has bought a fleet of Segway transporters to patrol its parking lots. Customers might see security guards making their rounds on the battery-powered, self-balancing scooters at 150 stores in the U.S., including locations in Chicago, Miami, Dallas, Los Angeles and Seattle.

Headset maker Plantronics has jettisoned the all-business look with its Discovery 925, a $149 Bluetooth ear piece that comes in cerise, gold and black. The lipstick-size carrying case charges the headset on the go. Nine more colors are in the works.