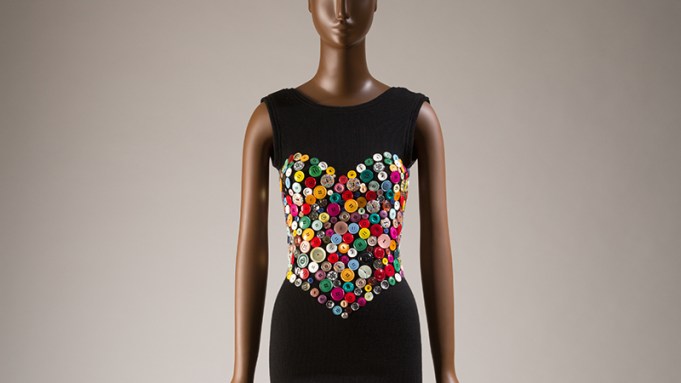 “Black Fashion Designers,” an exhibition that explores the impact that designers of African descent have had on fashion will be presented by the The Museum at the Fashion Institute of Technology Dec. 6 though May 16.

The exhibition features approximately 75 fashions by more than 60 designers. Although there have been exhibitions on individual black designers, this is the first major exhibition in many years that highlights the global history of black fashion designers from the Fifties to the present.

In addition, a short film was produced exclusively for the exhibition that addresses the ongoing topic of diversity within the fashion industry. André Leon Talley leads a discussion with designers Tracy Reese and Mimi Plange on their personal experiences as black fashion professionals and the role of diversity in fashion. It was funded by the FIT Diversity Council.

“Black Fashion Designers” opens with a fall 1986 evening dress by Patrick Kelly, embellished with his signature vintage buttons. Alongside it is a fall 2012 ensemble by Nigerian-born, British designer Duro Olowu, whose affinity for mixing prints is evident in an intricate lace cape. The exhibit also features a wedding gown by society dressmaker Ann Lowe, who is best known for designing Jacqueline Kennedy’s wedding dress. Lawrence Steele, a Milan-based African-American designer, is represented in a black evening dress accented by Swarovski crystals.

The exhibition is organized around eight themes ranging from “The Rise of the Black Designer,” “Black Models” and “The Street Influence” to “Activism” “Experimentation” and “The African Experience.” Among the designers whose work is on displays are Stephen Burrows, Scott Barrie, Willi Smith, B Michael, CD Greene, Cushnie et Ochs, Maxwell Osborne and Dao-Yi Chow of Public School, Jeffrey Banks, Shayne Oliver of Hood by Air, Lamine Kouyaté of the Paris-based Xuly.Bët, Kevan Hall and Tracy Reese.

Ariele Elia, assistant curator of Costume and Textiles, and Elizabeth Way, curatorial assistant, The Museum at FIT, organized the exhibition.