LONDON — While the Black Lives Matter movement is spurring swift change across the fashion industry, and society as a whole, in the U.S., the demand for Black models in China is also on the rise because of a new wave of designer brands that see inclusivity as an integral part of their DNA, and a more open-minded social environment that champions Sino-African relations.

China has a very different dynamic and history with Black people compared to the U.S., where the majority of African Americans were brought to the continent as a result of the slave trade. Most Black people living in China are there to do business or study by choice, and the majority of the population in China holds a neutral-to-friendly view toward them, as China’s history books would describe how its “African brothers” helped the country regain its seat at the U.N. in 1971.

On a diplomatic level, China is the biggest supporter of many African nations. It has pledged more than $150 billion in loans to the continent between 2000 and 2018 as part of the New Silk Road initiative, and in June, Chinese President Xi Jinping pledged to cancel the interest-free debts owed by several African countries as part of Beijing’s move to help the region during the coronavirus pandemic.

China also built the first electrified railway from Addis Ababa to Djibouti in 2018, based on China’s high-speed railway, and many other huge infrastructure projects that previous colonial rulers considered unworthy to invest in. 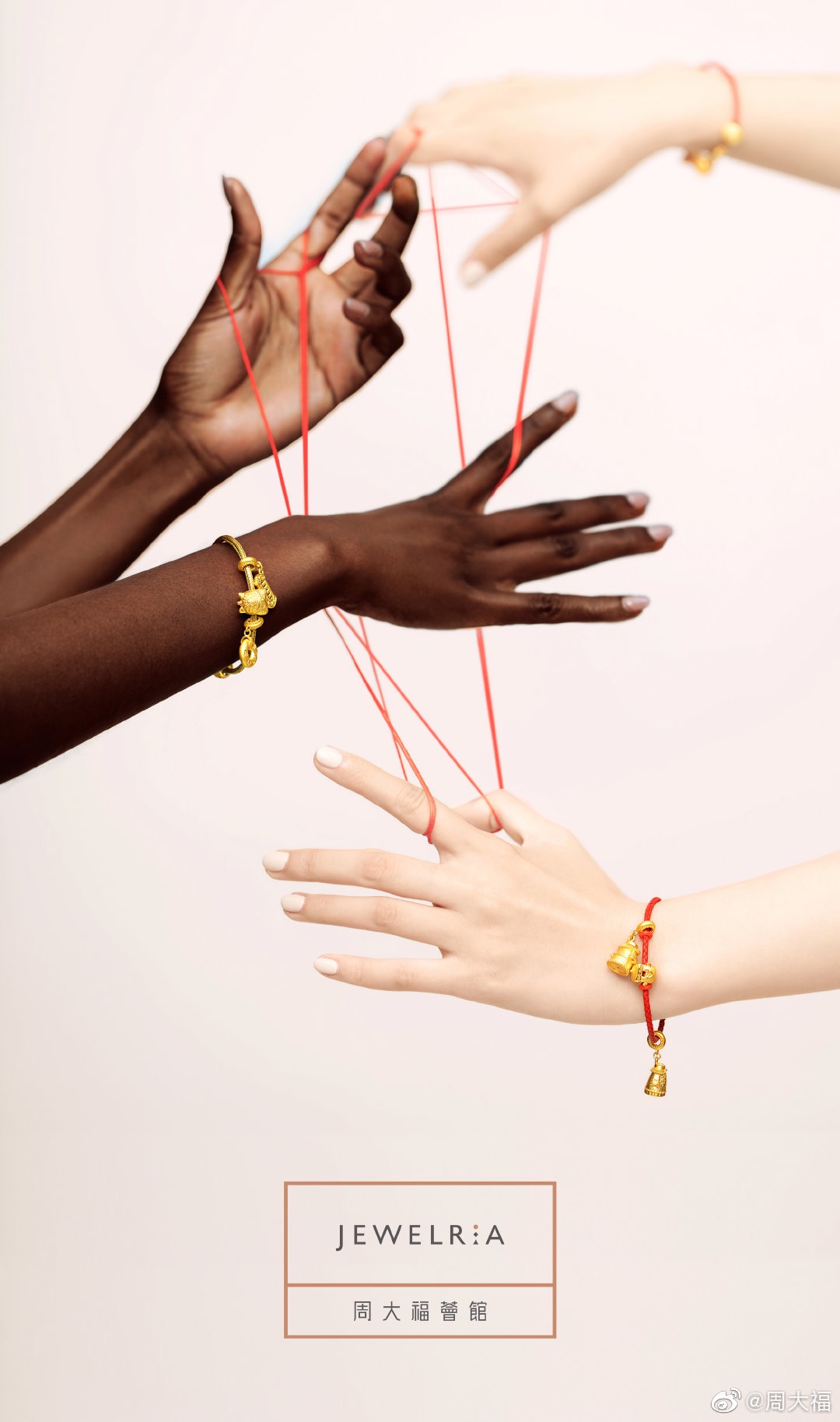 Still, Black representation in the Chinese media is rare, and when it appears it can raise eyebrows among some more conservative observers.

Hong Kong jeweler Chow Tai Fook, for example, posted three campaigns featuring the hands of a Black model playing a game with an Asian model for China’s Children’s Day on June 1 on Weibo. This kind of interracial depiction from a Chinese brand generated heated debate, with more than 19,000 comments and 300,000 likes on the post.

Some expressed their extreme and nationalist views, but the majority of the comments defended and praised Chow Tai Fook’s inclusive casting. One user said: “Thank you Chow Tai Fook, this is the right attitude a Chinese brand shall have, respecting different races and values equality.”

For a long time, fair skin has been associated with beauty, wealth and prosperity in China. Skin-whitening products are some of the bestsellers for beauty brands, from Lancôme’s Blanc Expert range and Estée Lauder’s Crescent White series to Chanel’s Le Blanc skin-care and makeup lines. While Unilever and L’Oreal have dropped any references to white or whitening on skin-care labels in response to the Black Lives Matter movement, the majority of luxury beauty brands have not yet taken a stance on this issue.

But with more Chinese traveling around the world and staying connected via social media receiving information from all sorts of cultures, the country’s ideal of beauty is changing. Leading Chinese models like Liu Wen, Lina Zhang and Chu Wong are some of the most in-demand faces in fashion at the moment, and their success is shifting the country’s decades-long obsession with Western facial features, such as double eyelids and a sharp jawline, toward more a progressive and diverse beauty standard.

Ajak Deng on the cover on Modern Weekly in 2012. She is the first Black model to be on the cover of a Chinese fashion publication.  Courtesy Photo/John-Paul Pietrus

This kind of open-mindedness is helping the fashion industry in China to become more inclusive toward Black models.

John-Paul Pietrus, a photographer who has been working with Chinese fashion publications for more than a decade and shot the first Chinese fashion magazine cover featuring a Black model — Ajak Deng wearing Comme des Garçons in 2012 for Modern Weekly produced in China (Vogue China put Naomi Campbell on the cover of its January 2009 issue, but it was not photographed in the country) — said he can feel there is an increasing demand for Black models in China.

“The first time I shot a Black model in China was in 2004 for Jalouse, when Elite was having their international model competition in Shanghai,” he said. “I wanted to do a big portfolio that showcased cultural diversity. I didn’t want the cliché of having a white girl in front of a concrete jungle sort of colonial thing. Instead, we shot Aye Tounkara all around Shanghai.

“People on the street were curious. They stared at her as odd. They hadn’t seen anyone like her at that time. People might have seen Naomi Campbell or Tyra Banks kind of Black models, but not her kind — shaved head and super dark skin and she was wearing super glamorous designer clothes. A car drove by, and the driver was so amazed by her, the car crashed into a lamppost,” he added. 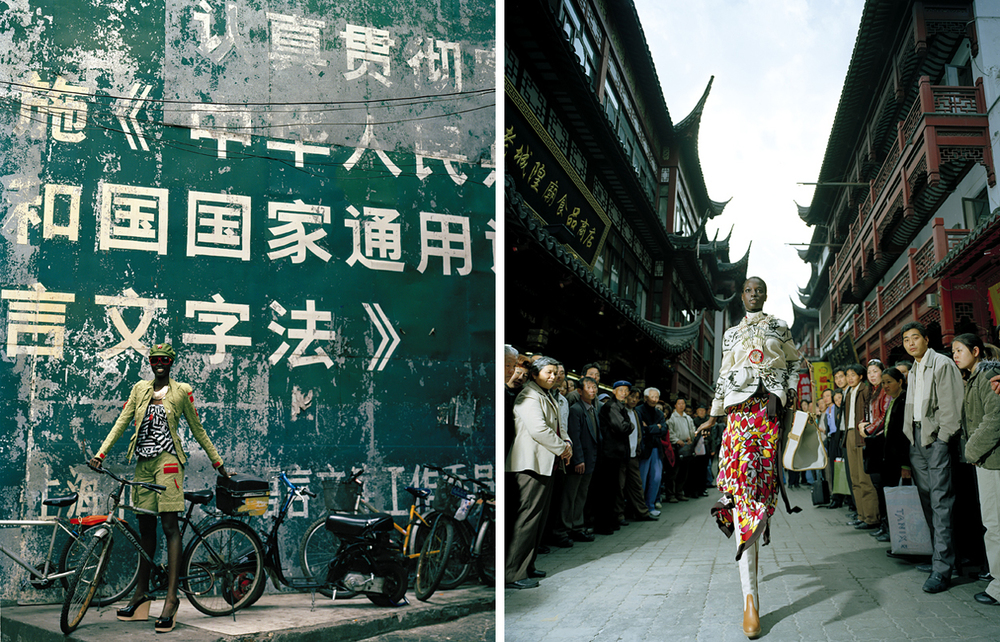 From the 2010s, as international brands began to bring more diverse models to their China shows, local fashion publications began to have more opportunities to work with Black models. Pietrus photographed Ajak Deng for Modern Weekly and Numéro China when she was in Shanghai for an Hermès show.

The Chinese editions of Vogue, Elle and Harper’s Bazaar have occasionally featured Black models in their editorials, but not as frequently as they want to. Editors and stylists cite the challenge being there simply aren’t that many Black models based in China, not even for a few months. Pietrus said he had never even seen a Black model’s card in China back in the day.

Men’s wear designer Feng Chen Wang said she had to fly Black models to China for her shows when the local agency couldn’t provide enough options. Having lived in London for more than a decade, Feng believes any brand should make inclusivity a part of its core values. She uses a diverse cast of models every season and in special projects she does with Converse and Levi’s. 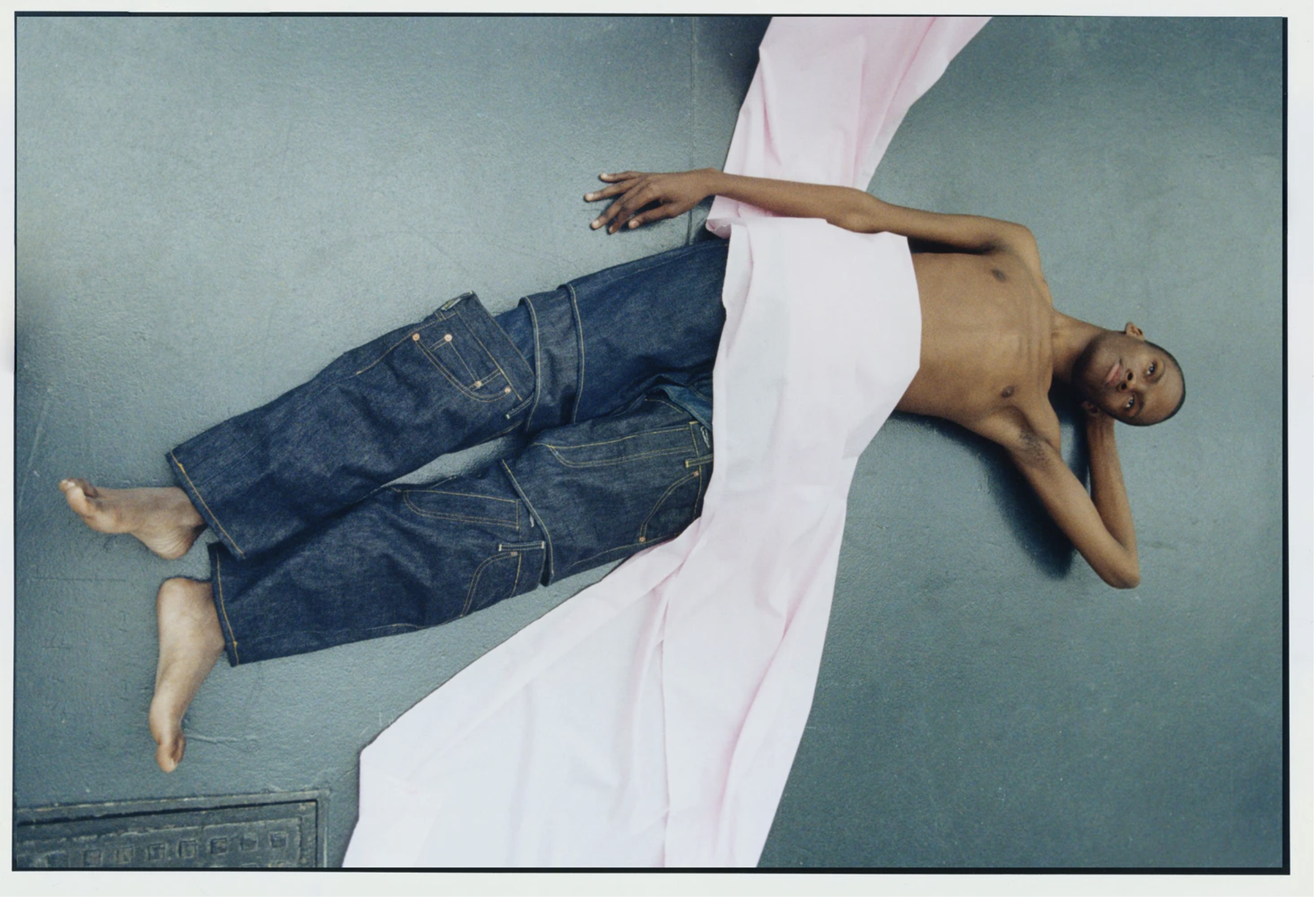 Fiona Lau of Ffixxed Studios, a Shanghai-based label, said if an emerging brand wants to reach the same level of casting diversity as in Paris or London, it will have to search hard within its limited budget.

“We are both originally from Australia and one of the fortunate things about growing up in Australia is living in a really multicultural society, so diversity is something that has always been an important part of what we do,” she said of her and her co-creative director Kain Picken. “With regard to the situation here in China, to be honest, we have not had that many options for Black models when casting our shows or look books, compared with the Paris shows.”

Beginning last season, the designers began to scout models through their personal network. “We used a Black male model for our look book who is actually our friend Daniel Magunje. He is really interesting, a Chinese speaking fashion blogger from Africa, now based in Hangzhou, and we wanted to work with him. It was a similar situation when we worked with Boubou the Crow, a French hip-hop dancer based in Shanghai. We sought him out ourselves. We need to be more proactive in finding our own models if there is not enough diversity provided through traditional agencies. It’s something we can continue to work on in the future,” Lau added. 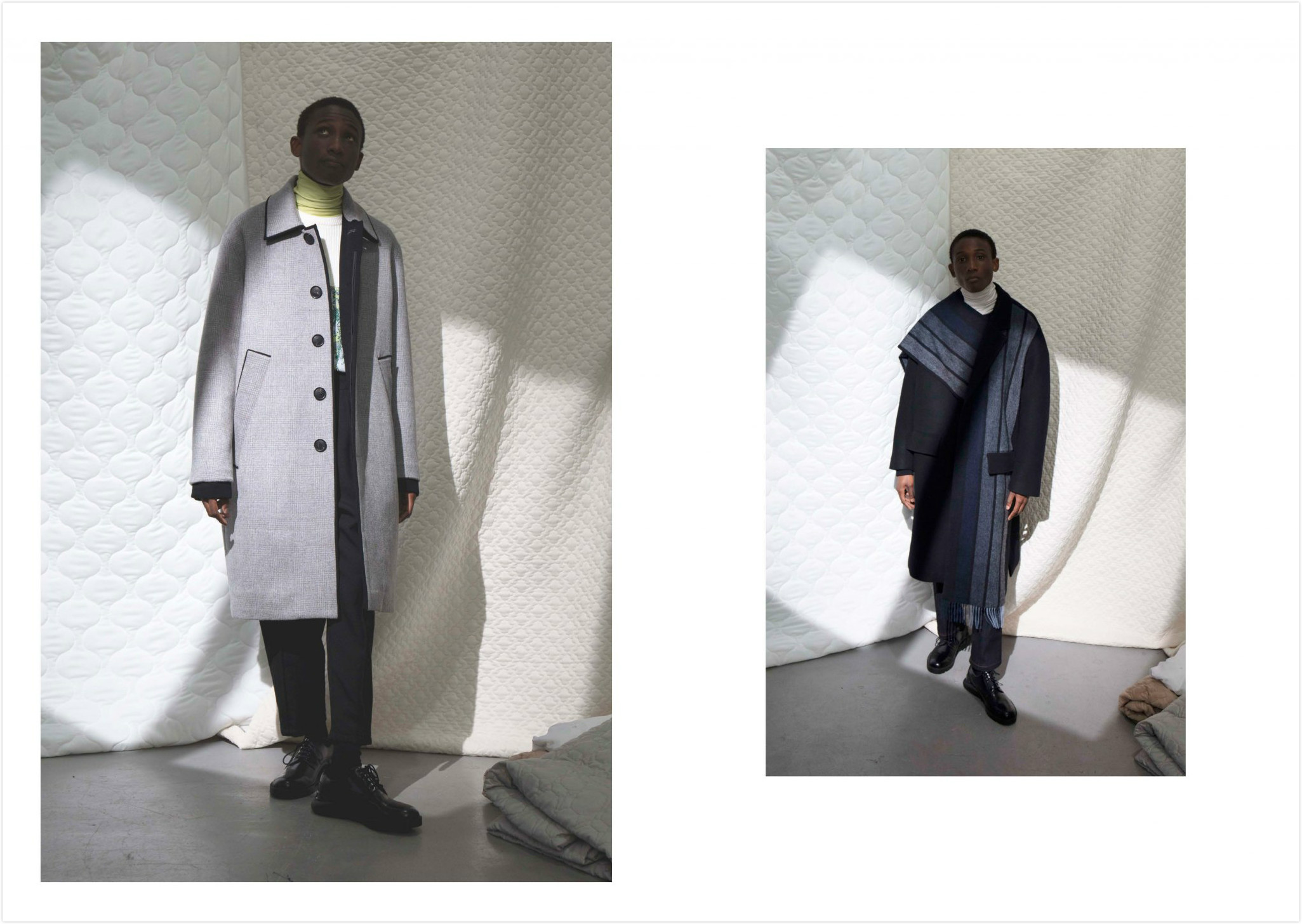 For big brands, the demand to have diversity of models in a show in China is on the rise, but very slowly, observed Tina Steele, communication director at event agency K2 in Shanghai.

“Diversity is not a priority. Very rarely have clients requested or accepted Black models in China. They wouldn’t say it directly, of course,” she said. “On average we’ll have either 50 to 70 percent Asian models and 30 to 50 percent Caucasian models. So far this year, for our shows we are only going for Asian models since most ex-pat models are unable to come in the country.”

The lack of Black models in China could also be attributed to economics, since for an agency to bring a model from overseas they need to be able to provide a certain amount of sustained commercial work to make it viable for the agency as well as for the model, although Haitian-American model Christina Rateau argues otherwise. She has been seeing more Black models working in Shanghai in recent years, mostly from Brazil.

A regular at Shanghai Fashion Week and an international business graduate from Shanghai’s Donghua University, Rateau has had a good career in China, walking for brands like Sirloin, Private Policy, Yirantian and INXX, and appearing in campaigns for Puma and the Bosideng x Jean Paul Gaultier capsule.

She said there is little competition when a brand wants to cast a Black model in China, and she can count all the Black models in Shanghai on her fingers. Rateau has been in Indianapolis with her family since the COVID-19 outbreak started in China and, based on the portfolio she built up in China, she has signed with an agency in the U.S. to explore the international market and creative roles behind the scenes. 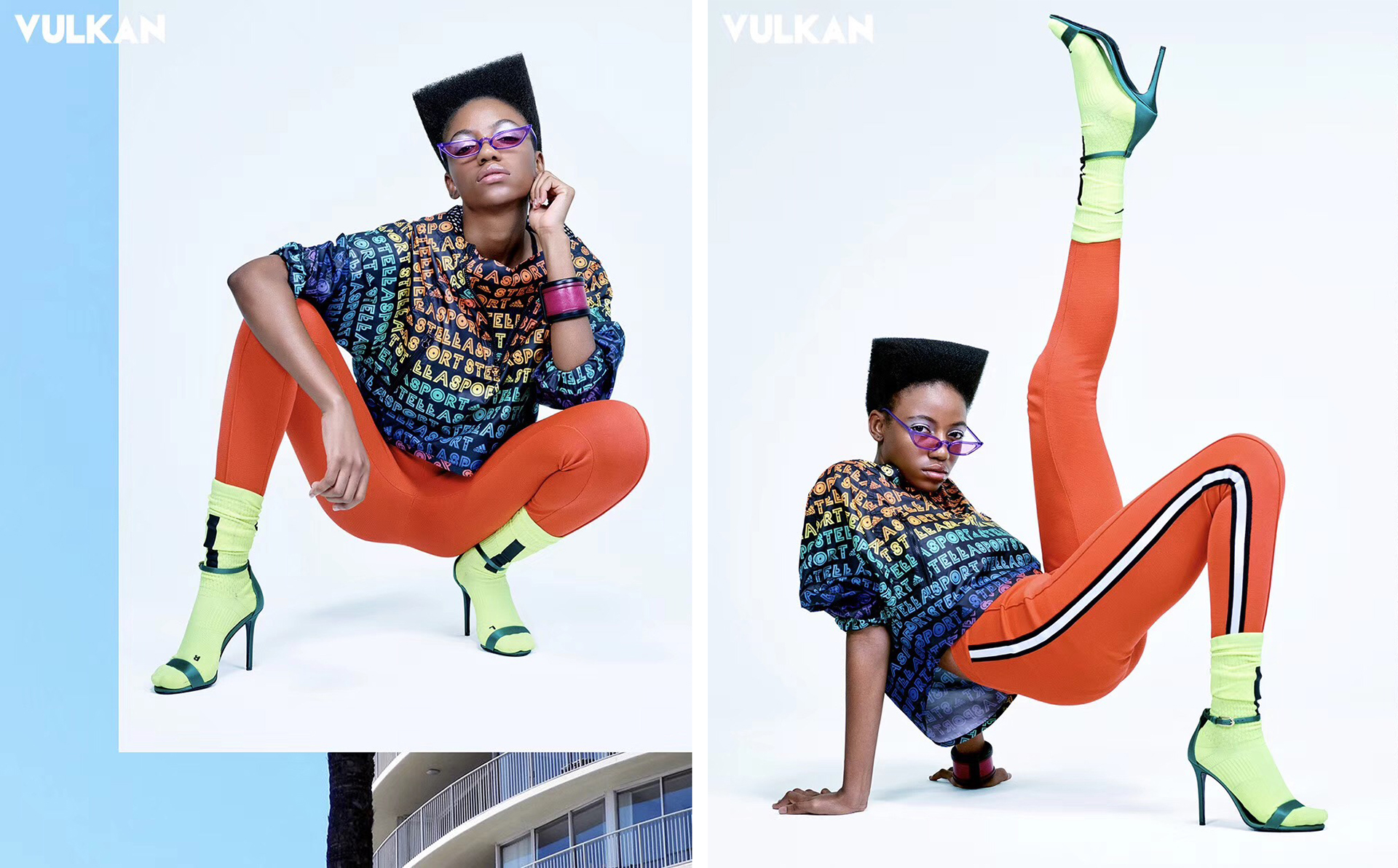 Rateau thinks Black models are getting more representation in China because Chinese clients are trying to mirror what high-fashion brands are doing — increasingly putting an emphasis on racial diversity. “With LVMH after Virgil Abloh came on board, you see his fashion shows and it’s like, ‘This is what it could be, man!’ And China is trying to mirror a lot of foreign trendsetting in that way. It’s like, ‘If Black models are cool abroad, we have to get that going here,'” she added.

At the same time, she acknowledged the complexity and wider implications of her modeling in China. “We’re also just not the beauty standard here. That’s a fact. It is weird, too, to impose someone else’s beauty standards onto China’s thousands of years of beauty standards. That said, I still think it’s still important to accept any and all kinds of beauty,” she said.

Magunje, 23, who came to China in 2014 to study accounting at Hangzhou’s Zhejiang Gongshang University, said he found self-confidence by modeling in China. “In Zimbabwe or South Africa, you have to be strong and muscular to be a model. I didn’t really fit in. After I got here, I was just shopping in a mall, minding my own business, and this very well-dressed guy just approached me and said he wanted me to model for his Taobao brand,” he said.

Since then, Magunje has an average of three modeling jobs a month while running his own cross-border business, helping Chinese companies to enter the African market, and promoting African designers and textiles in China. He said he never goes to a casting — jobs come to him from word-of-mouth recommendations — and he has discovered that there is, in fact, a hidden demand for Black models, who are often overlooked by professional modeling agencies, which tend to prefer Asian and Caucasian faces.

“I am thinking about starting a modeling agency to represent Black models in China,” he said. “Lots of my friends ask me how I started and they are looking for jobs in modeling in China, and I truly think I am in a good place to help. “