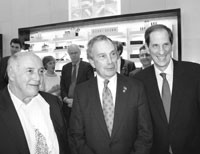 NEW YORK — With early shoppers as varied as Wal-Mart’s Lee Scott, Mayor Michael Bloomberg and Kwami Jackson of “The Apprentice,” it’s no wonder the new Bloomingdale’s in SoHo surpassed an estimated $1 million in sales its first two days of business.

“In two days, we came within a fraction of making our nine-day business plan for the balance of April,” said Bloomingdale’s chairman and chief executive Michael Gould. “We were elated with the enormous response and all the pent up excitement. The key now is to keep the presentation as close to a specialty store mentality as humanly possible,” which he explained means bringing in fresh merchandise on a regular basis, more full-priced selling compared with other Bloomingdale’s branches, and focusing on “recovery” which is restoring the presentation after each day’s traffic takes its toll.

“We also need to learn where [what categories] we can be a little stronger, and how to tweak our assortments. It’s all about the tweaking.”

The store, located at 504 Broadway, opened Friday for business with a private shopping day. Roughly 20,000 invitations to preferred and prospective customers were mailed, offering a $25 gift card. The response was strong, with a line wrapping around the store north to Spring Street, then east to Crosby Street and back to down to Broome Street much of the day, even when it rained. Bloomingdale’s gave out umbrellas.

“I was impressed by the line. It went all around the store,” said one Fifth Avenue retail executive at the scene. “These are jaded New Yorkers. It’s not like they’re from Indiana seeing Bloomingdale’s for the first time.”

Bloomingdale’s said Friday’s head count was close to 10,000 and that they had to keep people waiting outside since the store has a capacity for 1,500. Sources said sales on the first two days surpassed $1 million, although Gould would not confirm that, saying only that Friday’s sales volume was larger than Saturday’s.

Many also came from New Jersey and the outer boroughs. Tony Spring, Bloomingdale’s executive vice president of marketing, said about 40 percent of the mailing was “prospecting” for new customers. He said the store expects to draw primarily from 14th Street to lower Manhattan and the West Side up to Columbia University, as well as some nearby sections of New Jersey, such as Hoboken, and sections of Brooklyn, Queens and Long Island. The store’s goal is $45 million in annual sales and is currently operating with 79,000 square feet of selling space, though initially, Bloomingdale’s said the plan was for 90,000 square feet.

Saturday was the official opening, with about 300 shoppers behind barricades awaiting the ribbon-cutting, as the All-City High School Marching Band paraded up Broadway and into the store. Senator Charles Schumer and Gould presided over the fanfare.

“Fifteen years ago, you wouldn’t see a soul on a Saturday morning in SoHo,” said Schumer, who hails from Brooklyn. “Bloomingdale’s may be coming to Brooklyn in five years. Who knows?”

Bloomingdale’s officials later said there are no plans for a store there.

Business in SoHo does slow down on weekdays. When asked if she worried about that, Paula Dorf, who has a cosmetics shop right by the Broadway entrance, said, “Absolutely not. My name is out there. I’ve been a makeup artist for 22 years and there are lot of people who live and work in SoHo who want to shop during the week, and beat the weekend crowd.”

Wal-Mart ceo Scott visited the store on Wednesday and was greeted by Jack Hruska, Bloomingdale’s senior vice president of store design. One Bloomingdale’s source said Scott was allowed to buy a pair of socks, even though the store wasn’t yet open for business.

Since SoHo consumers are used to shopping single-level boutiques, the six-level Bloomingdale’s has been concerned about moving traffic to higher levels. But, Gould said, business was strong throughout the store, particularly in contemporary sportswear and contemporary collections on floors three to five, as well as in women’s shoes and handbags on two.

“Even men’s has started off much stronger than normally it would,” Gould added, citing casual footwear, travel and tote bag sales. “I really believe you can tell by opening day whether you are going to have a success. I listened to the press, and my own associates, who can be very critical, and to vendors. You can sense whether people are excited.”